How has map reading changed since the 1600s?

Literacy in the United States was never always just about reading, writing, and arithmetic. Remember in the 1980s and 1990s the angst about children becoming “computer literate”? The history of Literacy is largely about various types of skills one had to learn depending on the era in which they lived. Some kept their name, but changed in substance. Map literacy is one of those.

How To Find Your Purpose And Passion …
Cardano Foundation Launches AdaPay
Nusa Islands vs Gili Islands 2020 {Wh…
How You Can Start a Lifestyle Busines…
Testing 1,2,3. Checking in to see if …

When colonists began occupying the North American continent in the 1600s, it soon proved essential to know how to draw a map, such as of the boundaries of one’s farm or town, and to be able to read a map. When Thomas Jefferson completed the Louisiana Purchase in 1803, the first thing he did after recovering from sticker shock—the deal had cost 50% more than the annual budget for the entire federal government—was to immediately send a team of soldiers and scouts to map what he had just purchased. His Louis and Clark Expedition Developed some of the initial maps of the continent from Virginia to the Pacific Ocean. For the rest of the 1800s when it was not fighting wars or Indians, the US Army mapped in detail the United States.

When the National Park System was developed in the late 1800s and expanded across all of the twentieth century, the Army and park personnel developed the maps we use today when hiking in these areas, including the wilderness that has no roads. After satellites were launched into space, the American government continued to map the United States, beginning in the 1960s.

One of the subjects children learned in school was how to read a map, almost from the 1600s on. By the dawn of the twentieth century, it was common for classrooms at all grades to have a map of the United States hanging on the wall. By the 1940s, children were learning how to draw, recognize, and read maps of their towns and states. One of the core skills taught to all boy scouts, girl scouts, and other children’s national organizations was how to read a map.

When people began to travel by automobile in the 1920s, states built highways. Then in the 1950s, the federal government started creating the national highway system that we have today. To get anywhere they had to be able to read a map. The large gasoline vendors began to produce maps of the American road system in the 1920s and gave them away at gas stations. By the 1940s, it seemed every state government produced richly detailed maps of all the towns and roads in their state. So, just to get around, people needed to know how to read a map as much as they needed to know how to read a book. 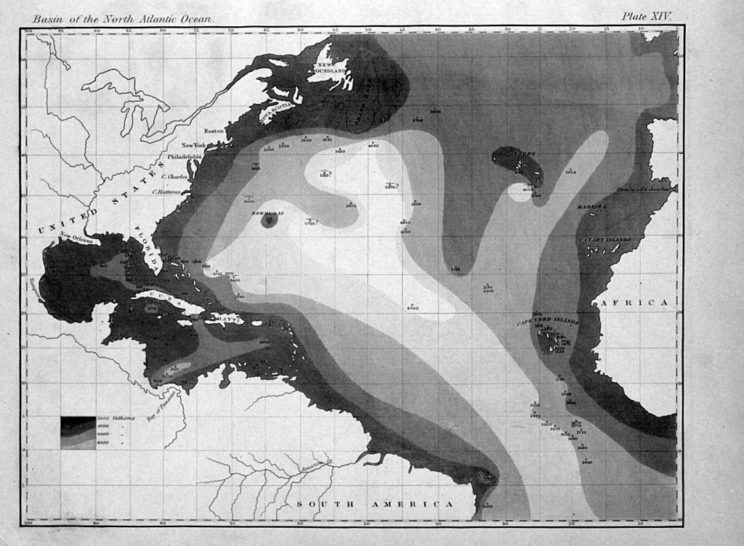 The very earliest rendition of a bathymetric map of an oceanic basin by Matthew Fontaine Maury. Public Domain via Wikimedia Commons.

Then came smartphones, beginning with Apple’s in 2007 and a bit earlier, Internet Mapquest functions. Now things shifted from having to read a map, to obtaining directions on how to go from one spot to another. But even with Mapquest pulled down onto your laptop, a map was included, although not always as accurate as earlier ones. Many Americans still keep an old paper Atlas of maps around, just in case. With smartphones, do we still use, or even need maps?

It appears we do. At the moment, the concept of the flat paper map, first developed in the 1500s, is still with us. Even though these maps distort the size of countries—for example making Iceland look like almost the size of Africa when it is in fact pretty tiny—they are still used to teach students where places and countries are on earth. More exciting is the use of mapping to understand the surface of various planets and, of course, our moon. Mars is in the process of being mapped as you read this. High school children who take an introductory astronomy course learn to read maps again. All military personnel are taught map reading as part of their initial training. Since GPS signals often are not available in large wilderness parks in North America, the old fashioned foldout paper map becomes as essential as almost any other survival tool hikers and campers carry with them.

Speaking of GPS—Global Positioning System—it was developed in the United States and launched in 1973. In effect, it is like a digital map that can pinpoint the location of people and things within inches. Satellites using GPS are used to create specialized maps, such as those of the bottom of an ocean, the height of mountains, and changing sea levels, among others. Storms and other weather conditions have been imposed on maps since the 1860s in North America and Western Europe. GPS has made mapping the most precise it has been in human history, automated by satellites, computers, and (increasingly) drones.

Like other types of literacy, the need for map literacy has not gone away. It just keeps changing. Why? Our dependence on map information is greater today than at any time in human history. So, the next time you go on vacation, don’t forget to bring along a map, as you will probably need it.

The post How has map reading changed since the 1600s? appeared first on OUPblog.

How has map reading changed since the 1600s?