“What a chance for an architect!” Charles Barry exclaimed as he watched the old Palace of Westminster burning down in 1834. When he then went on to win the competition to design the new Houses of Parliament he thought it was the chance of a lifetime. Instead it turned into the most nightmarish building project of the nineteenth century. What ‘lessons learned’ might the brilliant classical architect draw up today based on his experiences?

The source of many of Barry’s problems and the biggest challenge he faced was ambiguity over his accountability. The creation of a new Houses of Parliament was commissioned by the Board of the Office of Woods, the body in charge of royal palaces and public works in the 1830s and 1840s. This should have been Barry’s client throughout. Instead, during the rebuilding, Barry’s had to deal with others in government, in Parliament, and even among his contractors, who behaved as if they were the client and pressured him to do likewise, leading to conflicting instructions from different stakeholders, ‘scope creep’, and acrimonious disputes that spilled over into the press.

The rebuilding took so long due to the difficulties Barry faced, and was so complex, that the Office of Woods couldn’t cope. From an initial estimate of six years to complete the works, it actually took twenty four years to finish – and a further ten years to complete what today would be called the ‘snagging’. In the late 1840s a Royal Commission was set up – a further competing client – to oversee the budget and approve changes to the plans. After three years it threw in the towel in despair and  the Office of Woods collapsed under the strain in 1851, to be replaced by a new government department, the Office of Works. Prime Ministers came and went, and in the end Barry was the only constant person throughout the rebuilding.

The construction of the foundations over gravel beds and quicksand on the land side, and into the riverbed on the other was hugely difficult and time consuming. The first contractors were sacked for slow progress and then the second contractors, Grissell & Peto, well-known for their work on various railway projects, ended up provoking a major strike when their foreman cracked down on the stonemasons to make up for lost time. The changing requirements, suspensions of work caused by select committee inquiries, problems with the stonework, the extraordinary detail and manufacturing of the gothic finishes and furnishings, and last but not least the cracking of the Great Bell – not once but twice – all led to further delays. 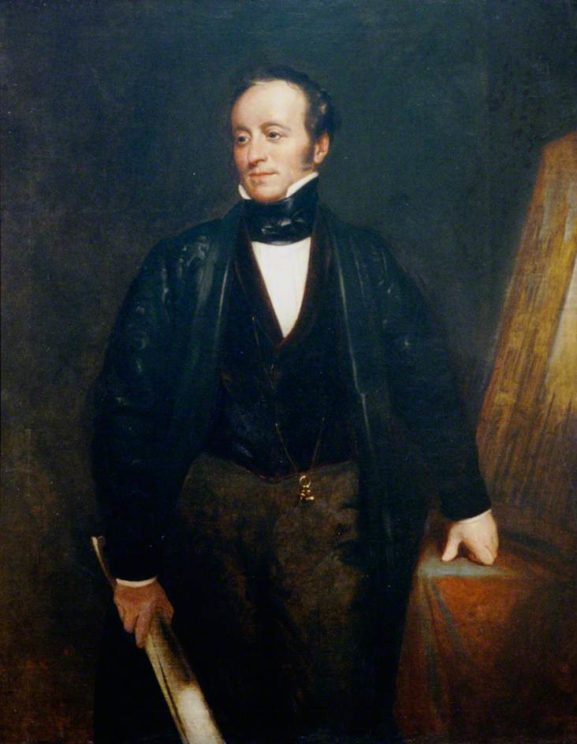 The finances got way out of control because of the extension of time required. Originally planned to cost £710,000 it eventually came in at £2.4m. Quantity surveying – that is, building accountancy – was in its infancy at the time, and even though Barry used the best professionals available to estimate progress, there were arguments with the Office of Woods over when payments should be made to contractors, austerity cuts, and even disputes over the architect’s own salary.

Charles Barry was a very savvy operator when it came to communications. He gave The Illustrated London News exclusive access to the Palace as it was constructed. Its artists were able to tour the building and make sketches for the paper – founded in 1842 – as each part of the building was opened, in return for favourable copy and spectacular publicity such as when the House of Lords chamber opened in 1847. Barry published his own plans of the Palace for the public in a bestselling volume, and when things got tough and he was criticised in the letter columns of the papers by disgruntled contractors, he was swift to rebut their claims in print.

Barry wisely cultivated a variety of prominent royals to promote the project, and also to keep his spirits up. The most famous was Prince Albert, who had been appointed as Chair of the Fine Arts Commission in 1841, responsible for all the painting and sculpture in the new Palace. Many royals from outside Britain also came to visit as the works progressed – the Tsar of Russia was overwhelmed by the building, calling it ‘a dream in stone’, and sent Charles Barry a gold and diamond snuffbox through the Russian ambassador afterwards as a thank-you present.

Barry’s practice was to use the best people he possibly could to help him achieve his aim of creating the most important building in the country. Of these, AWN Pugin is the most famous – Barry’s collaborator on the gothic detailing of the exterior and the designer of most of the interiors and the furnishings. But there were many others, including James Walker the engineer he employed to work out how the Palace could be built into the Thames; Michael Faraday the scientist who was asked for advice on the air-conditioning; and William ‘Strata’ Smith the geologist who helped to choose the stone. However, some experts proved very difficult to manage, particularly David Boswell Reid ‘the Great Ventilator’ and Edmund Becket Denison, the horologist who designed the clock mechanism. Their inability to get their own way with Barry on their personal schemes and inventions led to rows in the press, litigation, threats of libel and yet more delay.

Finally, Barry kept to a regular and balanced routine throughout his career. He rose before dawn and worked for four hours, before breakfast at eight. Occupied with business in his office at Westminster (now the Sports and Social Club of the Palace of Westminster) during the day, he liked nothing better than to return to his family in the evening and have dinner at six or seven. He then had a quick refreshing snooze, chatted with his wife and children, played the flute, or read until eight, had a cup of tea, and then carried on with work until midnight. This highly-effective regime sustained him in the first ten years of his involvement with the Palace. When things got tough he turned vegetarian to help with the stress. He also took occasional holidays to unwind, especially in mountain scenery, and Paris was a favourite city which he visited on several occasions.

Featured image credit: Houses of Parliament by tm. CC BY 2.0 via Wikimedia Commons.