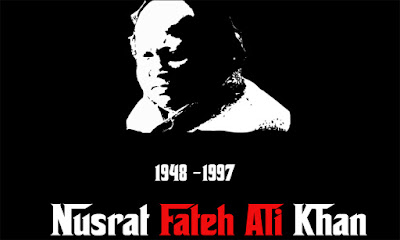 Nusrat Fateh Ali Khan (Punjabi: نصرت فتح علی خان (Shahmukhī)) (October 13, 1948 – August 16, 1997), a world-renowned Pakistani musician, was primarily a singer of Qawwali, the devotional music of the Sufis (a mystical tradition within Islam). Considered one of the greatest singers ever recorded, he possessed a six-octave vocal range and could perform at a high level of intensity for several hours.[1] Extending the 600-year old Qawwali tradition of his family, Khan is widely credited with introducing Sufi music to international audiences.[2][3] He was popularly known as "Shahenshah-e-Qawwali", meaning "The King of Kings of Qawwali".[4]

Born in Faisalabad, Pakistan, Khan had his first public performance at age of 16, at his father's chelum. He officially became the head of the family qawwali party in 1971, and was signed by Oriental Star Agencies (OSA), Birmingham, U.K., in the early 1980s. In subsequent years, Khan released movie scores and albums for various labels in Pakistan, Europe, Japan and the U.S. He engaged in collaborations and experiments with Western artists, becoming a well-known world music artist in the process. He toured extensively, performing in over 40 countries.[5]
Early Life And Career
Khan was born on October 13, 1948 in the city of Lyallpur (now Faisalabad), Pakistan. He was the fifth child and first son of Fateh Ali Khan, a musicologist, vocalist, instrumentalist, and Qawwal. Khan's family, which included four older sisters and a younger brother, Farrukh Fateh Ali Khan, grew up in central Lyallpur. Initially, his father did not want Khan to follow the family's vocation. He had his heart set on Khan choosing a much more respectable career path and becoming a doctor, because he felt Qawwali artists had low social status. However, Khan showed such an aptitude for, and interest in, Qawwali that his father finally relented.[6] Khan began by learning to play tabla alongside his father before progressing to learn Raag Vidya and Bol Bandish. He then went on to learn to sing within the classical framework of khayal. Khan's training with his father was cut short when his father died in 1964, leaving Khan's paternal uncles, Mubarak Ali Khan and Salamat Ali Khan, to complete his training. His first performance was at a traditional graveside ceremony for his father, known as chehlum, which took place forty days after his father's death.

In 1971, after the death of Mubarak Ali Khan, Khan became the official leader of the family Qawwali party and the party became known as Nusrat Fateh Ali Khan, Mujahid Mubarak Ali Khan & Party. Khan's first public performance as the leader of the Qawwali party was at a studio recording broadcast as part of an annual music festival organised by Radio Pakistan, known as Jashn-e-Baharan. Khan sang mainly in Urdu and Punjabi and occasionally in Persian, Braj Bhasha and Hindi. His first major hit in Pakistan was the song Haq Ali Ali, which was performed in a traditional style and with traditional instrumentation. The song featured restrained use of Khan's sargam improvisations.

In 1979, Khan married his first cousin, Naheed (the daughter of Fateh Ali Khan's brother, Salamat Ali Khan); they had one daughter, Nida.[7]

Early in his career, Khan was signed up by Oriental Star Agencies in the U.K. to their Star Cassette Label. OSA sponsored regular concert tours by Khan to the U.K. from the early '80s onwards, and released much of this live material on cassette, CD, videotape and DVD.
Later career
In the 1992–93 academic year, Khan was a Visiting Artist in the Ethnomusicology department at the University of Washington, Seattle.[8]

Khan teamed with Peter Gabriel on the soundtrack to The Last Temptation of Christ in 1985, with Canadian musician Michael Brook on the albums Mustt Mustt (1990) and Night Song (1996),[9] and with Pearl Jam lead singer Eddie Vedder in 1995 on two songs for the soundtrack to Dead Man Walking. One of these songs ("The Long Road") was re-used on the soundtrack for Eat Pray Love in 2010. Khan also contributed to the soundtrack of Natural Born Killers. He composed the music for the 1994 film Bandit Queen in collaboration with Roger White.

Peter Gabriel's Real World label later released five albums of Khan's traditional Qawwali, together with some of his experimental work which included the albums Mustt Mustt and Star Rise. Khan provided vocals for The Prayer Cycle, which was put together by Jonathan Elias, but died before the vocals could be completed. Alanis Morissette was brought in to sing with his unfinished vocals. Khan also collabrated with Michael Brook to create music for the song "Sweet Pain" used in the movie Any Given Sunday. He also performed traditional Qawwali before international audiences at several WOMAD world music festivals and the single "Dam Mast Qalandar" was remixed by electronic trip hop group Massive Attack in 1998.

His album Intoxicated Spirit was nominated for a Grammy award in 1997 for best traditional folk album.

Khan contributed songs to, and performed in, several Pakistani films. Shortly before his death, he recorded a song each for two Bollywood films, Aur Pyaar Ho Gaya (in which he also sang the song onscreen) and Kachche Dhaage. He sang the title song of the film Dhadkan. He also sang "Saya bhi saath jab chhod jaye" for Sunny Deol's movie Dillagi. The song was released in 1999, two years after Khan's death.

Khan contributed the song "Gurus of Peace" to the album Vande Mataram, composed by A. R. Rahman, and released to celebrate the 50th anniversary of India's independence. Rahman, who was a big fan of Khan could not do further songs with him. As a tribute, Rahman later released an album titled Gurus of Peace, which featured "Allah Hoo" by Khan. Rahman's 2007 song "Tere Bina" was also done as a tribute to Khan.[10]

After his death, the song "Solemn Prayer", on which Khan provided vocals, was used on the Peter Gabriel song "Signal to Noise" (on the album Up), and on the soundtrack to the Martin Scorsese film Gangs of New York.

According to the Guinness Book of World Records, Khan Fateh Ali Khan holds the world record for the largest recorded output by a Qawwali artist—a total of 125 albums as of 2001.
Death
Khan was taken ill with kidney and liver failure on August 11, 1997 in London, England, while on the way to Los Angeles in order to receive a kidney transplant. He died of a sudden cardiac arrest at Cromwell Hospital, London, on Saturday, August 16, 1997, aged 48.[11] His body was returned to Faisalabad, Pakistan, and his funeral was attended by the public.
Composition of Nusrat's qawwali party
The composition of Khan's ensemble, called a "party" (or "Humnawa" in Urdu), changed over its 26 years. Listed below is a snapshot of the party, circa 1983:

The one significant member of the party who does not appear on this list is Atta Fareed. For many years, he alternated with Rehmat Ali on vocals and second harmonium. He is easily identifiable in videos since he plays the harmonium left-handed.

This snapshot is non-representative in one respect: harmoniums were usually the only instruments. Only rarely were instruments like mandolin or guitar used.
Awards and Titles
Khan is widely considered to be the most important qawwal in history.[12][13] In 1987, Khan received the President of Pakistan’s Award for Pride of Performance for his contribution to Pakistani music.[8][14] In 1995 he received the UNESCO Music Prize.[15][16] In 1996 he was awarded Grand Prix des Amériques at Montreal World Film Festival for exceptional contribution to the art of cinema.[17] In 2005, Khan was awarded the "Legends" award at the UK Asian Music Awards.[18] Time magazine's issue of November 6, 2006, "60 Years of Asian Heroes", lists him as one of the top 12 artists and thinkers in the last 60 years.[19] He also appeared on NPR's 50 Great Voices list in 2010.[20] In August 2010 he was included in CNN's list of the twenty most iconic musicians from the past fifty years.[21]
Many honorary titles were bestowed upon Khan during his 25-year music career. He was given the title of Ustad after performing classical music at a function in Lahore on his father's death anniversary.[22]
Tributes, legacy and influence
Alexandra A. Seno of Asiaweek wrote:[23]

Nusrat Fateh Ali Khan's voice was otherworldly. For 25 years, his mystical songs transfixed millions. It was not long enough ... He performed qawali, which means wise or philosophical utterance, as nobody else of his generation did. His vocal range, talent for improvisation and sheer intensity were unsurpassed.

Jeff Buckley cited Khan as a major influence, saying of him "He's my Elvis", and performing the first few minutes of Khan's hit "Yeh Jo Halka Halka Suroor Hai" (including vocals) at live concerts.[24][25] Many other artists have also cited Khan as an influence, such as A. R. Rahman,[26] Sheila Chandra,[27] and Alim Qasimov.[28]

Paul Williams picked a concert performance by Khan for inclusion in his 2000 book The 20th Century's Greatest Hits: a 'top-40' list, in which he devotes a chapter each to what he considers the top 40 artistic achievements of the 20th century in any field (including art, movies, music, fiction, non-fiction, science-fiction).[29]