Named after Sam Nazarian, Chef Andres' partner and founder of SBE, Saam allows for the enjoyment of the cuisine in a more formal atmosphere, with attentive waitstaff at your beck and call. We came here tonight for a reservation of seven, and were blown away. The cuisine, apparently having matured and perfected since our initial visits, was enjoyed in a much different fashion than it has been in Blanco or Rojo, Bazaar's two dining rooms. The quieter, more formal setting only enhanced the dining experience and the ability to appreciate the food. Our 20 course meal began as soon as Brian and Jan arrived, joining Javier of http://www.teenageglutster.com/, Kevin of http://www.kevineats.com/, Ryan of http://www.tangbro.com/, Mike of http://www.pepsimonster.com/, and myself.

We began with a complimentary chef's cocktail, the salt air margarita. It's a margarita topped with salt and lime foam. The foam plays the part of the salted rim, and was infused in every sip. Then the food began:

Cotton candy foie gras: A cubed piece of foie gras terrine, covered in cotton candy, on a stick. The sweet cotton candy made for a playful companion to the richness of the terrine.

Olive oil bonbon: A olive oil from California with a green and nutty flavor, was encapsulated by a candied exterior. As you can see, the exterior was like a glass syringe. 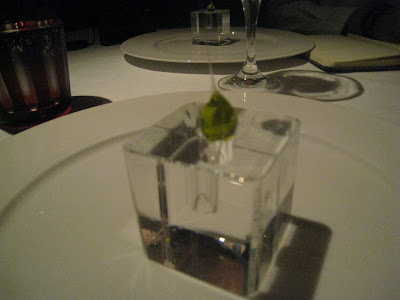 Benefits of onion juice for hair - Si…
What to wear: outfit ideas for Christ…
Equipment for IVF and Andrology Lab
Former Malta Government Official Beco…
Discover the Magic of Venice in Novem…
Caviar steamed bun: A Chinese bao stuffed with creme fraiche and topped with paddlefish caviar and salt foam. The saltiness from the caviar and foam contrasted well with the slight sweetness of the bun and cream fraiche.
Bagel and Lox Cone: The cream, filling the crispy cone, was topped with Salmon roe. Simply, it was delicious. The saltiness and texture of each individual salmon egg bursting in my mouth paired well with the creme inside.
Olives Ferran Adria: Juice made from the finest olives of the season from Spain, dipped in a calcium bath and sodium alginate. Dropping spoonfuls of the olive oil juice into the calcium bath forms a skin, giving liquid olives. Always a winner here.

Jose's Ham and Cheese: Air bread filled with cheese and topped with thinly sliced Jamon Iberico. A sophisticated interpretation of such a simple sandwich, this bite sized portion was heaven in my fingers.

Sea Urchin Conservas: Sea Urchin served in a can, over what was described as close to a pico de gallo, with the vegetables minced finely. Not as good as what we've had in the past at Bazaar, but still very refreshing.

Shrimp cocktail: Santa Barbara spot prawn, poached rare, with a syringe of broth made from the head. One of the highlights of the evening, with the sweetness of the shrimp sharpened by the broth in the syringe.

Nitro gazpacho: Made exactly in the same fashion as the nitro caiparinha, gazpacho is added to a bowl with liquid nitrogen, almost freezing the gazpacho and provided a creamy texture to this clean and delicious dish.

Bluefin tuna toro: A tender slice of toro accompanied by compressed watermelon, a slightly poached quail egg and salt foam. Though I heard some opinions that the sweetness of the watermelon didn't work with the toro, I thoroughly enjoyed it. The watermelon brought out some of the fishiness of the toro, and the quail egg yolk brought back the richness. 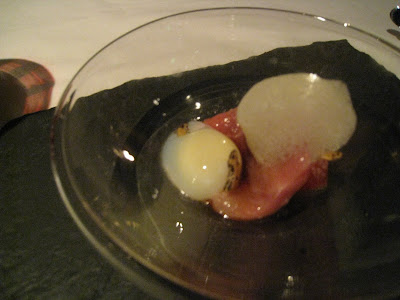 Norwegian Lobster: Another favorite, a sliver of lobster over fresh seaweed, accompanied by a broth in an espresso cup made from the head. The essence of lobster is revealed here in marvelous fashion.

"Smoked salmon": A one ounce to one and a half ounce portion of brined salmon, poached, was served with a tzatziki sauce that went through the spherification process similar to the olives Ferran Adria. The salmon was moist, with hints of the brine. Quite nice. 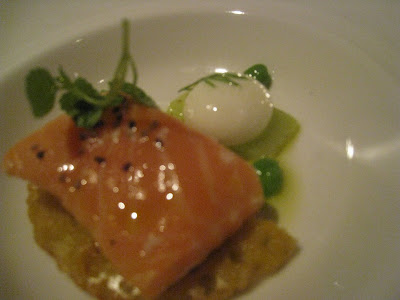 Not Your Everyday Caprese: A cherry tomato, compressed, with the 'sexy tomato seeds' and a mozzarella sauce prepared with the spherification process. Topped with a pesto sauce, this made a normal caprese seem pedestrian. 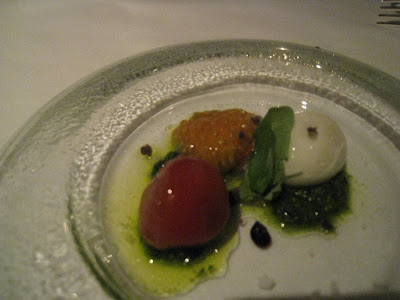 Tournedos Rossini 2009: Our final savory Dish of the evening. 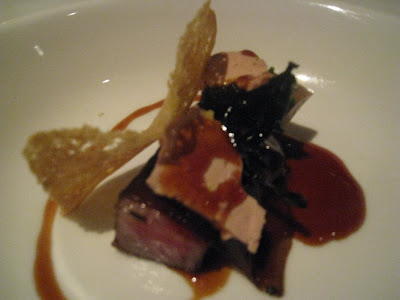 A dish was created in honor of Italian composer Gioachino Rossini, a noted gourmand. In Chef Andres' new interpretation, a piece of A-5 Japanese wagyu is topped with a truffle gelee, mushrooms and slices of foie gras. This extremely rich and decadent dish was a great finish to the savory dishes. I cannot adequately explain how delicious this dish was.

Dragon's Breath Popcorn: Candied and carameled pieces of popcorn, dipped in liquid nitrogen. Eaten with mouth closed, a puff of smoke comes through the nose. This dish has come under a bit of fire in the recent past. Intended by Chef Andres as something playful and unexpected, numerous internet writeups have taken the surprise away, causing Chef Andres to essentially remove it from the rotation.

Chocolate Biscuit Coulant Michel Bras- a mini chocolate souffle like cake over a bed of whipped creme flavored with cardamon and sugared ginger pieces. The souffle was runny on the inside and the cardamon added an interesting flavor contrast. Pleasant, but still trying to decide how much I enjoyed it.

Coconut in 'Half Shell': Coconut creme in a cocunut flavored edible shell. Passion fruit sauce made this dish Fiji on a plate.

Petit Fours: Candied passion fruit, chocolate drizzle on a stick and saffron truffles. Although the truffles were way too sweet, this was a great ending to a great meal.

At the end of the meal, our server got us a tour of the kitchen, where chef de cuisine Michael Voltaggio thanked us for our patronage. Our group of seven caused a bottleneck in the kitchen, but no one seemed to mind. Each and every person in that kitchen welcomed us like family, including Marcel Vigneron, of Top Chef fame. We stayed much too long in the kitchen, talking food with Chef Voltaggio. They even took the time to take pictures with us, and offered us full run of the place. We graciously got the heck out of there, as we saw how busy they were.

Saam is a true success that allows for the diner to have an option to enjoy the meal in a formal setting. In some instances, the lack of quality in food is exposed when eaten in a nicer atmosphere(try Father's Office). In the case of Saam and the Bazaar, the food was allowed to shine. This was truly a special meal.