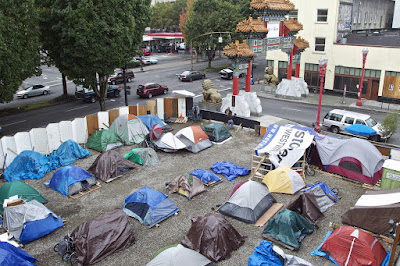 Living in Portland, Oregon not a day goes by that you do not see someone living on the street.  In covered entries to restaurants, on park benches, on the steps to your church...they're pretty much everywhere.  But, why there are so many is beyond the point of this article.   After our city declared a homeless emergency at the end of 2015, the city decided it needed to take legal action.

The city proposed a Safe Sleep Policy in 2016.  This policy was sanctioned in order to allow homeless communities within the city to camp on city sidewalks for a certain number of hours every night.  The point was to provide some rights to those without shelter in the city that can't make it to a shelter.  This provided a place for the 2,000 homeless people in Portland sleeping without shelter to get a safe night of sleep. This law was later redacted.

Still, Portland is struggling to find a place for all of those sleeping without shelter.  With the number of homeless individuals and families growing 10% from 2015 to 2017 in Portland, how can a city stretch it's resources to shelter some 2,500 people?

Dogecoin Gets a Zealous Push With Int…
Why Christians Need to Become Mature …
I braced for the storm that didn’t co…
OPINION - Shields and Brooks 7/19/201…
Mystic Messenger Guests List: Know Ho…