On January 23, 1897, Elva Zona Heaster Shue of Lewisburg WV, a bride of three months, was found dead at the bottom of the stairs leading to the second floor of the log house where she lived with her new husband. Her body was discovered by a neighbor, a boy of about 11 years, who did chores for her. Her case remains to this day a one of a kind event in the American judicial system … the only case in which the word of a ghost helped to solve a crime and convict a murderer!

LYRICS: Pdot O – Holy Ghost Cry
How To Help Your Husband Get On Board…
Brittney Griner's Cannabis Charges In…
Double Celebration As Actress, Mimi O…

A state highway marker several miles west of town sums up Shue’s amazing story: “Interred in a nearby cemetery is Zona Heaster Shue. Her death in 1897 was presumed natural until her spirit appeared to her mother to describe how she was killed by her husband Edward. Autopsy on the exhumed body verified the apparition’s account. Edward, found guilty of murder, was sentenced to state prison.”

Upon finding the dead woman, Andy Jones, the neighbor boy, ran back to his home where he informed his mother, and then continued on to the blacksmith shop where Edward S. Shue was working. When told of the situation Shue appeared in great anguish, ran to his home, gathered his dead Wife into his arms, and directed local doctor and coroner, Dr. George W. Knapp, be called. All during this time Shue held Zona’s head in his arms. After a brief examination, Dr. Knapp concluded that Zona “died of an everlasting faint,” i.e. a heart attack.

The body was prepared for burial with Shue assisting in the preparation of her body for burial, and placing her in the casket, always handling her head. He placed a folded sheet on one side of her head and an article of clothing on the other side of her head, which he said would make her rest easier. In addition, he tied a large scarf around her neck and explained tearfully that it “had been Zona’s favorite.”

Zona was taken to the home of her mother, Mrs. Mary Jane Heaster, on nearby Big Sewell Mountain. When the casket was opened Shue always remained at the head of the casket. The next day her body was buried in the little cemetery on the hill top. Nothing more was thought of the death other than that usual for a sudden death of anyone.

Within a month of the burial, however, the dead girl’s mother was telling neighbors that Zona’s spirit had appeared four nights in a row to accuse the blacksmith of her violent death – to “tell on him” – to set the record straight about her dying. Shue had been abusive and cruel, she said, and had attacked her in a fit of rage, savagely breaking her neck. Word spread quickly that these visions had convinced Mary Jane that the husband – who called himself Edward, but was really named Erasmus Stribbling Trout Shue, and was known as ‘Trout’ – had killed her daughter.

Mary Heaster and her brother-in-law Johnson Heaster went to Lewisburg prosecutor John A. Preston, who first disbelieved the story, but after several hours of questioning Mrs. Heaster became convinced that there was a basis for an investigation.

Dr. Knapp was consulted and he agreed that he might have been mistaken in his diagnosis. An investigation into Shue’s background revealed that he had served a term in the penitentiary and had been married twice previously, and both wives had died under strange circumstances. One wife was supposed to have died from a broken neck when she fell from a haystack. The other wife died while helping Shue to repair a chimney. He was on top the chimney and his wife was placing the rocks in a basket with a rope attached to it and as the basket was drawn up the basket turned and dropped the rock on the head of his wife. 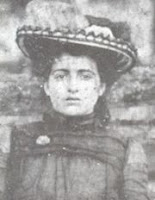 An exhumation was ordered and an inquest jury was assembled. The Greenbrier Independent reported that Trout Shue “vigorously complained” about the exhumation but it was made clear to him that he would be forced to attend the inquest if he did not go willingly. In rebuttal he replied that he knew that he would be arrested, “but they will not be able to prove I did it.” This careless statement indicated that he at least had knowledge that his wife had been murdered.

The autopsy findings were quite damning to Shue. An Independent report on March 9 said that “the discovery was made that the neck was broken and the windpipe mashed. On the throat were the marks of fingers indicating that she had been choken [sic]….. the neck was dislocated between the first and second vertebrae. The ligaments were torn and ruptured. The windpipe had been crushed at a point in front of the neck.”

The findings were made public at once, upsetting many in the community. Shue was arrested, charged with murder, and taken to the jail at Lewisburg where he was held until his indictment by a Grand Jury and the trial in June.

On June 22, 1897 the jury returned a verdict of guilty after only one hour and ten minutes of deliberation. The accounts in the Independent make clear that Shue was convicted of the murder of his third wife on circumstantial evidence, and not because of a “ghost’s testimony.” He was sentenced to life in the state prison. Following a foiled lynching attempt a few days later, he was taken by train to the state prison in Moundsville, where he died on the first of March, 1900.

The post The Greenbrier Ghost appeared first on Appalachian History.

This post first appeared on Appalachian History, please read the originial post: here
People also like
LYRICS: Pdot O – Holy Ghost Cry
How To Help Your Husband Get On Board With Prepping – Part 2
Brittney Griner's Cannabis Charges In Russia: What's Next For The WNBA Star?
Double Celebration As Actress, Mimi Orjiekwe Bags Multimillion Ambassadorial Deal On Her 34th Birthday Photos)