When the Emperor Has No Clothes: A Life Poem about Donald Trump, Revealed at Last, from the Buckeye State 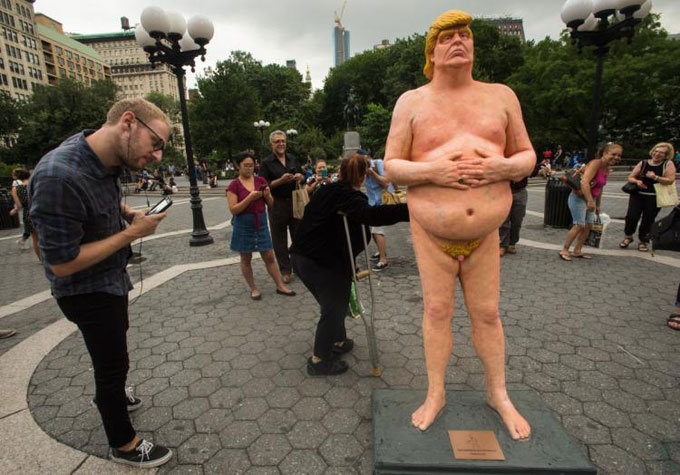 I wonder if it matters to a working man
figuring dimensions in August-Ohio heat,
doing the math and rounding off, this fence
and how easy it makes letting the dog out.
Because I don’t say any of that right off.
He says he had a stroke. Almost died.
After the epiphany of a recent brush
with death, he says, “Donald Trump
isn’t the asshole that we think he is.”
As if, by not quite dying, he tunneled
out of a warren of the Forgotten to say
what he says. Before that, he has said
death isn’t something as much as not
nothing. We’re standing in the yard.
And he thinks this is wisdom. Stuff
you don’t hear every day. But he is
here to estimate how much he will
charge to paint the backyard fence,
my fence. “Both sides?” he asks—
as if there are worlds where painting
one side is nothing, especially the side
of your choosing, a beacon of bare wood
visible in all directions. From streetside
or next door. He doesn’t flinch or smile,
but I’m sure he’s kidding. Waiting on him,
I had read an article on artificial intelligence.
And the whole sick run-off about Trump now
strikes me as funny. Until he launches into
what it’s like, or what he says he thinks it’s like,
on The Other Side—having recently passed over
the big-yikes Metaphysical Fence, not the one
for the US-Mexico border. That not nothing.
He thinks he is the only person who can speak
of what he has experienced as a living, breathing
Ohioan. I’m listening how I suppose a painted
fence listens to silence. Yes, both sides, I say.

How to Create a Winning Black Friday …
Does a Political ad Create a Problem …
Am I asking the right question?
OPINION - Shields and Brooks 9/6/2019
The Kintyre Experience

When the Emperor Has No Clothes: A Life Poem about Donald Trump, Revealed at Last, from the Buckeye State