The Power by Naomi Alderman 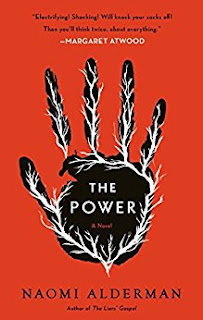 The Power by Naomi Alderman was first published in the United States this year and The United Kingdom last year. The Book is getting a lot of buzz and it is generating a lot of online discussion. This is a dystopian tale that explores the issues of gender, violence, oppression and religion.

How come so many Christians don’t rea…
Ecosusi – 15% off Cambridge Backpack
2 Women Last Seen At Wedding In Calif…
9 Best Pubic Hair Trimmers for Safe &…
Over the past year or so I have read several books that take place in fictional matriarchies. This book fits in with that reading. The links to my commentary on the other novels that I read on this subject are below.
I found this novel to be outstanding. The plot is gripping. The characters are interesting. The themes are fascinating. It is full of ideas. It is imaginative and inventive.
The book is framed as a historical novel written by a writer named Neil who lives in in the distant future. The story begins in the present time. One day, teenaged girls find that they have gained a new ability. They can administer electric shocks to others. Later they learn how to pass on the power to older Women. Women and girls can control the intensity and effect of shocks. Thus, most women gain the power to easily cause minor discomfort, paralysis, great pain, serious injury, or death. The new - found power gives women enormous physical advantage over men. In most cases, males are essentially helpless if assaulted by a woman. Most of the narrative of the book takes place over the ten - year period that follows the change. During this time radical transformations occur throughout the world.
Initially, in some places, there are enormous benefits. Abused and exploited women overthrow their oppressors. Women who are the victims of sex trafficking, physical abuse, oppressive laws, etc. are liberated. In Saudi Arabia for instance, women quickly overthrow the repressive regime and free themselves from male domination.
Things quickly go awry however. Chaos and war break out in many places as revolutions spiral out of control. Much of the narrative takes place in Moldavia. There, a repressive and violent female supremacist regime takes power. Men are reduced to a status of near slavery. Males are brutalized, raped and murdered on a large scale. Lest anyone think that there is no equivalent to this in our world, this part of the book reminds me of ISIS's treatment of women. The regime also institutes laws that are very similar to Saudi Arabian Male Guardianship Laws  but in reverse. The narrative, as told by the writer in the far future, makes clear that this is a pattern that will repeat itself in many times and in many places in the future.
In places like The United Kingdom and the United States, change is less chaotic but still dramatic. Violence committed by young girls skyrockets. In schools girls and boys are segregated for the protection of the boys. Men and boys fear being out alone and need to be cautious around girls and women. Domestic violence and murder perpetuated against men by women becomes much more common. Men begin to be displaced from leadership roles in both business and government. Men begin to be objectified and sexually harassed.
In one passage, the President of Moldavia and her entourage is described,
“Tatiana is followed into the room by two well-built men in fitted clothing: black T-shirts so tight you can see the outline of their nipples, skinny trousers with noticeable crotch bulges. When she sits— in a high-backed chair on a dais— they sit beside her, on somewhat lower stools. The trappings of power, the rewards of success.”

The Power by Naomi Alderman