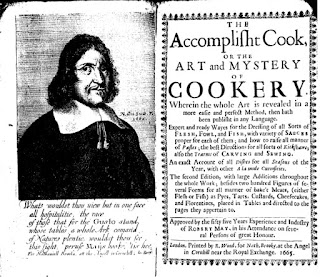 The image of the 17th century English aristocrat is fixed forever by Van Dyke. In this post, which is inspired by Adam Smyth’s review of Wendy Wall’s Recipes for Thought: Knowledge and Taste in the Early Modern English Kitchen in the latest LRB, I look at another artist who worked under aristocrat patronage, and what kind of image of the aristocracy he provides. He’s the cook, Robert May, author of The accomplisht cook, or The art and mystery of cookery (1660).

Otherwayes to counterfeit Ram, Wether, or any Mutton for Venison.
Bloody it in sheeps, lambs, or pigs blood, or any good and new blood, season it as before, and bake it either for hot or cold. In this fashion you may bake mutton, lamb, or kid.
I will leave him with his recipe to make umble pie. This is again a matter of eking out your venison. I gather that the edible inner organs of a deer were the perquisite of the huntsman who had given his professional assistance at the hunt. Samuel Pepys was eating Umble pie in 1663: “Mrs. Turner… did bring us an Umble-pie hot out of her oven”. It became a joke in the 19thcentury:

To make Umble Pyes.
Lay minced beef-suet in the bottom of the pye, or slices of interlarded bacon, and the umbles cut as big as small dice, with some bacon cut in the same form, and seasoned with nutmeg, pepper, and salt, fill your pyes with it and slices of bacon and butter, close it up and bake it, and liquor it with claret, butter, and stripped time.