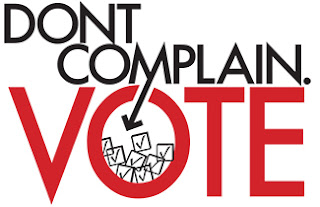 On Saturday I received my UFT ballot in the mail. I don't know about you, but I vote every chance I get. Often the people I vote for don't win, and sometimes I have buyer's remorse after they do, but I never give up. Sadly, I'm in the minority.

With such awful background music, it's often hard for me to tell people that their votes are important. History suggests that retirees, who have no interest in who negotiates our contracts, will drown us out. History suggests that the overwhelming majority of us will take our ballots and toss them in the trash. If we do that, of course, we lose. It's a self-fulfilling prophecy. How do we turn the tide?

We do it together. You pay over a thousand dollars a year, literally, to be part of union. What do you want to do with that money? Do you want to pay for Michael Mulgrew to bring his sycophantic loyalty oath signers all over the country to eat crème brûlée and drink 14-dollar beers? Or do you want to buy yourself a little hope, a little voice, a little change?

I'm opting for the latter. I'm figuring that most people who take the time to come over here and read this blog are too. Of course you need to get off your ass and vote.

I'm asking you to reach out to everyone you know and tell them they have a real choice this year. That choice is either to vote for status quo or to vote for MORE/ New Action, a group of hundreds of diverse activists who think out of the box. We are not motivated by perks, trips and jobs. We reject them if they cost us our voices. We are not seeking a seat at the table. We will build our own damn table and create our own destiny.

We don't believe in consulting with Bill Gates about what we do, because he's not an expert. We are out there in the field every day, we deal with kids in the largest school district in the country, and make no mistake, we are the experts. We have a big voice, the biggest voice of any union in the country. The only remaining question is whether or not we will use it.

There's no question for me. I'm voting for MORE/ New Action. I urge you not only to vote, but also to tell your colleagues to do so everywhere you go today, tomorrow, and all week. You are powerful, word of mouth is powerful, and we own what we do. Let's raise our voices, raise our profile, and raise our flag.

We are the United Federation of Teachers. We are leaders. We are agents of change. It's time to raise our voices. Watch and share the video below, because this is step one.