May: Latent Work Demand and Official Unemployment Move In Opposite Directions, as the American Job Shortage Number (AJSN) Increases 260,000 to 17.6 Million

Commentators yesterday called this morning’s Bureau of Labor Statistics employment release “the big one,” and expected we would gain about 160,000 net new positions.  Well, one out of two ain’t bad.

Useful Tips for Building a Stronger C…
Beard Bib – Solution For Messy Groomi…
Man Confronts Girlfriend For Wearing …
PDF Extra – NEW! Team Plan
Farm to School to Future!
This 44th month of the American Job Shortage Number, or AJSN, started with the strangest set of federal data I have yet seen.  What on earth happened?
First, seasonally adjusted official joblessness, the headline number from this government-released report but not for much longer, fell all the way from 5.0% to 4.7%.  That was tremendously good.
Second, we gained only 38,000 net new nonfarm jobs.  That was terrible, about 100,000 less than absorbed by our population increase, a five-year low, and a full 122,000 under than the solid consensus projection.
Third, the count of people not technically Unemployed, but wanting work and not having looked for it for a year or more, soared a staggering 545,000 to just over 3.8 million.  The increase in Latent Demand for jobs from this group dwarfed the changes from all others, including those from 206,000 fewer unemployed, almost 900,000 fewer claiming no interest in work, and the oddly opposite 30,000 fall in persons discouraged.
Fourth, the two figures best showing how common it is for Americans to be working were split, with the employment-population ratio staying even at 59.7%, but the labor force participation rate matching April’s loss to reach 62.6% and heading again toward levels not seen since Jimmy Carter’s first full presidential year.
Fifth, while the number of Officially unemployed people out for 27 weeks or longer actually fell almost 200,000 to 1.9 million, the count of those working part-time for economic reasons, or keeping short-hour positions while unsuccessfully seeking full-time ones, which had been ratcheting down for years, skyrocketed 468,000 and is now at 6.4 million, only 800,000 less than the officially completely jobless.  I know of no statistics on the number of people with temporary positions paying, say, half of what they once earned before, but that must be in the same range if not beyond it.
Sixth, average wages, though given to fluctuation and up significantly last time, rose another 5 cents per hour.
Overall, the AJSN is significantly up, as follows: 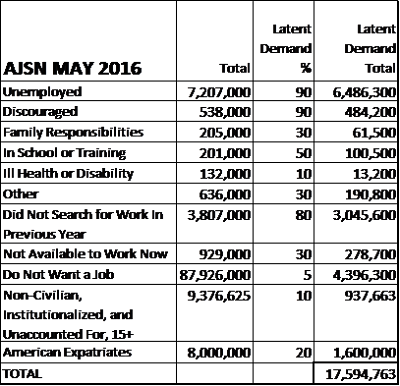 The share of Latent demand coming from those officially jobless is now under 37 percent, which I suspect is an all-time American high.  For decades, most people ready to go from working to not working were technically unemployed – now, that is not even close to true.
Two other good things went into May’s peculiar mix.  The unadjusted jobless rate went down as well, to 4.5%, and compared to a year before the AJSN is 900,000 lower, reflecting reduced latent demand of 1.05 million from those Officially Unemployed but 150,000 more from those with other statuses.  We also should not need to worry about interest rate boosts for a while.
The turtle was confused – he moved his legs around quite a bit for a member of his species, and considered various possibilities.  In the end, he took a decisive step, and forward or sideways it was not.

May: Latent Work Demand and Official Unemployment Move In Opposite Directions, as the American Job Shortage Number (AJSN) Increases 260,000 to 17.6 Million