At first glance, this morning’s Bureau of Labor Statistics October employment report was nondescript.  There were 161,000 net new nonfarm positions created, a tad below the publicized 175,000 expectation, but still more than needed for population increase.  Official seasonally-adjusted joblessness was down a tenth of a point to 4.9%, offset by labor force participation down the same to 62.8% and employment to population also off 0.1% to 59.7%, with all three of those results returning to where they were in August.  The count of those out of work for 27 weeks or longer held again at 2.0 million.

How Universal Basic Income Gets Attra…
Home Decorating with Small Rugs
Ultimate Guide to CBD Edibles 2020
A Comparison of the Environmental Imp…
Reasons Why Your Content Won’t Rank E…
The other primary metrics, though, were better.  Those working part-time for economic reasons, or unsuccessfully seeking full-time employment while holding on to something shorter, kept its 200,000 September improvement to stay at 5.9 million.  Unadjusted joblessness improved a tenth of a percent to 4.7%.  And, most dramatically in this generally dull month, average private nonfarm hourly earnings rose 10 cents per hour, and 13 cents over the originally stated September result, to reach $25.92.  That is double the inflation rate, and noteworthy to see after last month’s net 9 cent gain.
What really made these results a success were changes in the categories of marginal attachment.  Those reporting wanting to work but not having looked for it in the previous year tallied 78,000 Fewer.  People describing themselves as discouraged fell 66,000, a lot for one month, to 487,000, and counts of those in the “other” and “family responsibilities” groups declined 59,000 and 56,000.
So how many more positions could be quickly filled if getting one were as easy as getting a pizza?  The American Job Shortage Number, which takes shares of all of these statuses, shows that we could now absorb 300,000 fewer than in September, as follows: 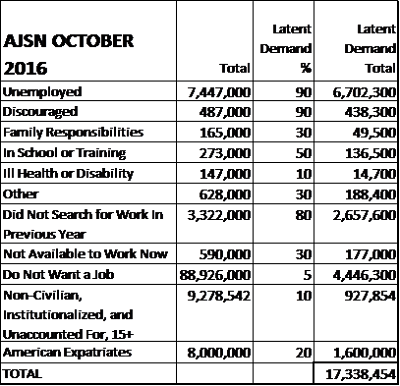 The Ajsn also improved over a year ago, when, at 17.485 million, it reflected higher official unemployment and many more with discouraged status, but fewer expatriates, fewer interested but not having looked for a year or more, and of course fewer people claiming to not want work at all, which rises annually like clockwork.  That is an improvement from September, when the AJSN had its first year-over-year worsening since 2010.  With unemployment down, only 38.6% of these jobs would be taken by those officially jobless, a yet smaller share.
Overall, October was positive, especially since, per last month’s post, we are approaching the good times’ limit.  I am glad to see the less publicized statuses improving.  Will it last?  We will see.  In the meantime, the turtle did, once more, take a small step forward.