29 Minutes and 48 Seconds of Sexual Harassment 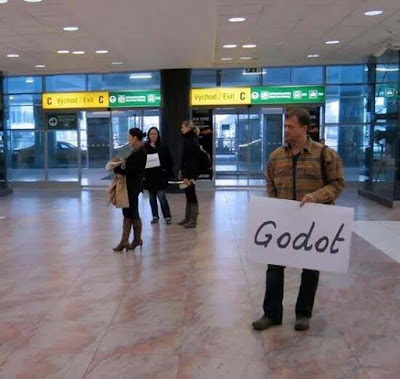 That's how long it took me to take the DOE's sexual harassment webinar this morning. I've been wondering what exactly the point was of making us take it over and over again each year. Now I think maybe I've figured it out. There's always stress on how you should report things you see as a bystander. Maybe now, when incidents are reported, they'll be able to point fingers at people who were uninvolved and say, "Hey,  you didn't report it, so it's YOUR fault."

After all, a big stress was on notifying OEO. I don't want to burst any bubbles, but I've seen how OEO works up close and personal more times than I care to remember. On any given case, OEO has six months to investigate. I have never, ever seen them complete an investigation in six months. In their favor, I will say their treatment of people is absolutely equitable. Whether you've committed an atrocity, made a minor error, or done nothing whatsoever, they will contact you, terrify you, and make you wait years before they decide on your relative culpability.

Now on the positive side, if you've done nothing wrong and they decide you did, there's really nothing they can do about it. They can't put a letter in your file once they miss their deadline. On the other hand, if you actually do commit atrocious acts, whether or not they've discovered them, they can't really do anything about it. It's kind of amazing they can't complete investigations within six months. Judge Judy does it in 15 minutes. To my mind, at least, it makes sense to interview people immediately while their memories are fresh rather than waiting months or years. Of course, I'm just a lowly teacher, not an expert investigator doing my job ever so carefully, making sure to miss every deadline. (If I missed every deadline, I'd be a lowly unemployed teacher.)

Too bad we didn't have the harassment training earlier. For example, years ago I taught in a school where a friend was going to be excessed. I wasn't a chapter leader or anything, but I knew the AP's favorite had less seniority than she did. This friend of mine told the boss, "Arthur says you can't get rid of me unless you get rid of Miss Wormwood first." The APs fondness for me declined sharply at that point.

I don't really know why. I was pretty cooperative. She asked me to give one of my students 100%. It happened that this student's brother, a now-graduated Student, was a particular favorite of the AP. In fact, she was pregnant by him and eventually had his child. It happened that the sister was a great student, and I had no issue giving her 100. But it was kind of undue pressure. Maybe I should have reported the AP to OEO and waited a few years to see what they said back.

On the other hand, things were about to get tougher for me. I had just bought a house, and I needed my college job to make ends meet. Because the Spanish teacher threw kids out of classes (which was inconvenient for the AP, because she then had to meet with the students) and I did not, she said, "You will teach all Spanish 1 next year, or I'm giving you a late schedule and you'll lose your other job.

This was disturbing. Should I have called OEO, lost my job and hoped for the best? What I actually did was look at the now-defunct UFT transfer plan. Because I was working at Queens College, I selected two nearby schools, neither of which had late schedules at the time: Francis Lewis and John Bowne. The principal, upon signing my request, quipped, "You'll never get into Francis Lewis."

Six weeks later, the DOE called and told me to report to Francis Lewis. A colleague told me, on the first day, that the AP was walking around asking, "Where is Mr. Goldstein?" (I guess she had to find someone else to teach Spanish.)

A few months later she came to our school for some meeting. She saw me in the hall and upbraided me for not saying goodbye to her, or coming by to explain my abrupt departure. In fact, I had considered saying many things to her and thought I showed great discretion and restraint by having kept my big mouth shut. I assure you if I spoke to her, she'd have liked my words far less than the nothing she received.

Anyway, pardon me if I doubt the DOE would provide anything beyond lip service to any complaint I made. It's nice that they put out the webinar, but they're absolutely the last people I'd go to if I had a problem, then or now.

29 Minutes and 48 Seconds of Sexual Harassment