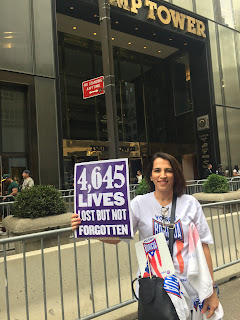 I really loved the parade last year, so I went again this year. Post Hurricane Maria, there was a markedly different tone, My friend and colleague Mayra, who's from Puerto Rico, has the message in her hand. At this point, we were in front of Trump Tower.

A lot of people were wearing hats that said 4645. That was well over the President's cheery estimate of forty some-odd lives lost. Throwing a bunch of paper towels was far from an appropriate response, and his profoundly insightful observation that Puerto Rico was a big island surrounded by water was not particularly helpful either.

Puerto Rico is under siege by vulture capitalists set on bleeding the island dry, closing the schools, reducing services, and doing pretty much whatever they can to squeeze every last drop of profit from the island. The United States could pay off the debt and free them from this nonsense, but chooses not to. 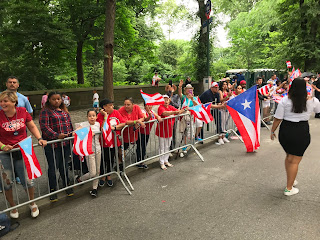 I was curious about the different colored flags. You can see in the picture at right that some are lighter blue than the others. I'm not sure why that is or what it signifies. Maybe nothing. My Puerto Rican friend couldn't explain it either.

I also saw some in black and white, and a lot of people dressed in black and white. I'm told that's a sign of militancy, standing against the vulture capitalists who have their eyes on decimating the island because they haven't yet acquired sufficient millions of dollars. A group pictured below sends that message to the President. 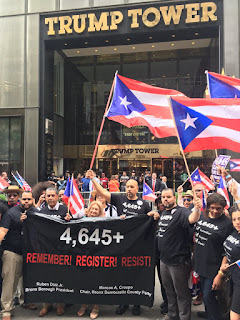 And despite that, there was still a lot of visible celebration. Though I didn't see him, I heard Andrew Cuomo was around. A lot of people had signs that said Cuomo's name and proclaimed Puerto Rican pride.I was very glad not to have seen him because I hear if you accidentally touch Andrew Cuomo you have to scrub your whole body with Brillo pad. (Otherwise, you might find yourself eating Sandra Lee's Kwanzaa cake,  which can be detrimental to your health. Lee is a Food Network personality and Cuomo's girlfriend, the one who helps Andy evade taxes by locking out home inspectors checking for unlicensed and untaxed improvements to their house.) 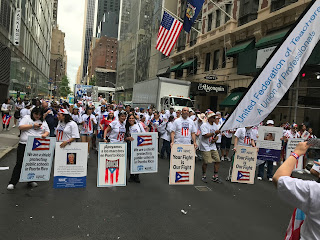 Here's the thing about parades--they involve a whole lot of waiting. Here you see the front of the UFT parade contingent. I don't remember what time it was when we took that photo, but UFT asked us to get there by 8:30. I missed a train and didn't make it until ten. We were supposed to start marching at 11, and I don't think we made it out until 12. So my advice, if you go to the Labor Day Parade in September, is get there at 9:30 instead of 8:30. The toughest part of a parade is standing around and waiting for it to begin.

This notwithstanding, for us it was a great celebration. We gave away t-shirts, flags, fans and bandanas. I tried to give them to children and the elderly, but there's something in America that pushes us to do anything for free stuff, and I sometimes gave in to demands. The most treasured item appeared to be the "Yo soy Boricua" t-shirt that most of us were wearing. Next was the bandana. My friend Mayra had a huge stack of them, but seemed to give them only to people who either cheered relentlessly or praised teachers. She criticized me for giving away stuff faster than I could replenish it. 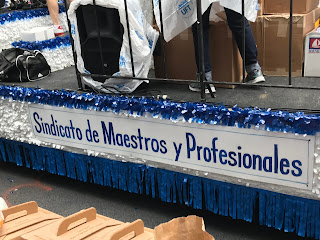 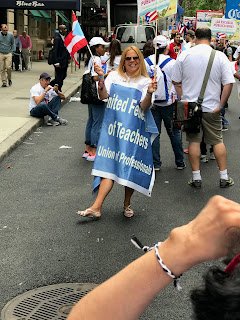 I found none of that persuasive. In fact now, very much like Puerto Rico, we're facing an existential crisis. As far as I can see, there's never a particularly good time to stop telling the truth. Side effects of ignoring truth include Donald Trump and the crisis in Puerto Rico, among other things. But we're still the biggest teacher local in the country. Our fight for survival is crucial to us and all who'd follow in our footsteps.

At the parade on Sunday, we saw protest and celebration come together as one. On the right is my friend Alexandra, who was dancing to the ubiquitous loud music while a whole lot of us were standing around and complaining about how long we had to wait for the parade to begin.

In times of crisis, it's always hard to find a balance. I think the Puerto Rican Day Parade struck it on Sunday. Now all the rest of us have to do is figure out where the balance is each and every other day from now on.

The Monsters of Toulouse