MLK Was a Strong Proponent of Union--Let's Honor His Memory 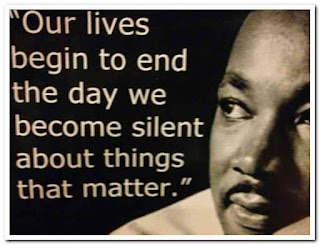 AFL-CIO has an entire section devoted to Martin Luther King Jr. and his ties to organized labor. Make no mistake, he would be horrified by what's going on in the United States today. While King is largely remembered for his battle for civil rights, it's less widely known that said battle included raising all boats via a unionized work force.

I have a lot of disagreements with union leadership about how the UFT is run, but one thing I hope I have in common is a strong and unyielding belief that we are stronger when we stand together. I look at our enemies, people like Michael Bloomberg and Donald Trump, people who'd have us fend for ourselves against huge corporations, and I know our best bet is to stand strong.

Trump knows it too, which is why he believes in the misleadingly named Right to Work nonsense. He knows human nature often suggests the path of least resistance, which is keeping your union dues in your pocket and letting someone else do the work. In fact, that's a huge part of our own union's issue. Even as we all pay into union, we are plagued by the twin menaces fear and apathy. I understand fear. After all, I've been watching Andrew Cuomo bloviate for years about how awful we are and how he couldn't wait to fire us. I've seen him refer to his own programs as "baloney" because not enough teachers were on the unemployment line. I don't trust anything he's had his paws on, including the state APPR system.

Apathy is something else. We are quite guilty of it, and though though UFT voting has risen to 24 from 17%, we're still nothing less than a disgrace. MLK believed in people taking a stand and so do I. As long as we're hiding in the bushes our voices will not be heard. MLK's fight was not for any one group, but rather for all of us. When some of us are oppressed, all of us are oppressed.

It's pretty sad that we're facing a President, a Senate, a Congress, and soon a Supreme Court that hasn't got our interests at heart. But MLK didn't give up against overwhelming odds and that's why we remember him. We can't allow Trump and his flunkies to move us back without a fight.

Let's honor MLK's memory. Let's not watch the grass grow under our feet. Let's stop being afraid of anything but our own apathy. MLK would want us to stand against the execrable Donald Trump and his band of thugs. Let's do so. Let's honor his memory not only today, but also next Saturday. Find your warmest winter coat and meet me, meet MORE, and meet the UFT at 10:30 AM at 1 Dag Hammarskjold Plaza on 47th Street between 2nd and 3rd Avenue.

In fact, King was in Memphis to address and stand up for the Sanitation Workers when he was assassinated. Let's go to Manhattan, take our own stand, and follow in MLK's footsteps. Let's stop Donald Trump and the morally bankrupt GOP from moving us backward.

Will I see you there?

MLK Was a Strong Proponent of Union--Let's Honor His Memory