August Jobs Report: Almost Everything Got Smaller, and the AJSN Showed Latent Demand Off 1.2 Million to 18.8 Million

This time, nearly all the numbers in the Bureau of Labor Statistics Employment Situation Summary decreased.  Starting with net new nonfarm payroll positions, which at 235,000 hit neither one-third of the consensus 750,000 projection nor one-fourth of July’s 943,000 rise, that polarity was also matched for better by seasonally adjusted unemployment (down 0.2% to 5.2%), unadjusted unemployment (down 0.4% to 5.3%), the total Number of officially jobless (down 300,000 to 8.4 million), and those out for 27 weeks or longer (down 200,000 to 3.2 million).  Staying even were the labor force participation rate, at 61.7%, and the count of those working part-time for economic reasons, or holding on to such jobs while thus far unsuccessfully seeking full-time ones, still 4.5 million.  Increasers were the number on temporary layoff, up 100,000 to 1.3 million, the employment-population ratio, strange since the number working fell, up 0.1% to 58.5%, and average private nonfarm payroll hourly earnings, with an adjustment gaining 19 cents to $30.73.  This time, higher pay seems to have reflected higher wages at the bottom instead of such jobs going away, as employers are, if slowly and grudgingly, raising pay to keep positions filled.

The American Job Shortage Number or AJSN, the measure of how many additional positions could be quickly filled if all knew they would be easy to get, also shrunk, decreasing 1.188,000 as follows: 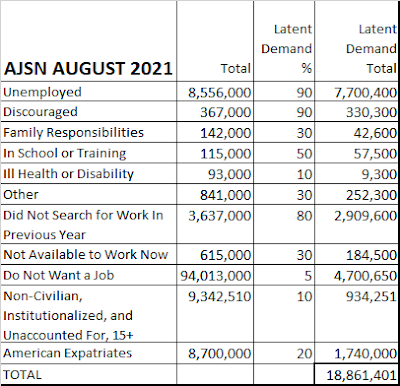 Of its 11 components above, ten decreased.  The only exception was spectacular – the count of those saying they did not want a job soared almost 2.2 million, possibly its largest monthly change ever.  That, which had declined almost 1.7 million over the previous two months, more than rebounded, showing that many people rejoining the labor force from mid-May to mid-July and not finding what they wanted went back on the shelf.  The share of the AJSN from those officially jobless, 40.8%, edged down 0.6%.

What can we make of this data?  The statistic that explained the others was the fall in those not wanting to work – that fit with lower counts of both unemployed and marginally employed people, which, with higher latent demand percentages, accounted for the AJSN’s otherwise surprising drop.  It was a sort of consolidation month, with a disappointing number of new positions but others not bad overall and looking more like they did, though with half-again-higher unemployment, before the pandemic.  I can no longer trade heavily on how we have been doing with the coronavirus, as the massive majority of cases are preventable through convenient and long-available vaccinations, so we are left with a moderately progressive outcome.  Accordingly, the turtle took a medium-sized step forward.

August Jobs Report: Almost Everything Got Smaller, and the AJSN Showed Latent Demand Off 1.2 Million to 18.8 Million