The Number of advertised jobs keeps rising to new highs, but the seekers are there too, and they’re not all connecting.

That’s one of the findings from this morning’s Bureau of Labor Statistics Employment Situation Summary.  That report started with the marquee result of 850,000 net new nonfarm payroll positions, which beat out 675,000 and 700,000 published projections.  The adjusted employment rate fell 0.2% from 6.1% to 5.9%, and people working part-time for economic reasons, or holding onto that sort of job while seeking and not finding a full-time one, dropped 700,000, or over one-eighth, to 4.6 million.

Otherwise the numbers were weak or neutral.  Unadjusted joblessness, reflecting a normal drop in the count of people working from mid-May to mid-June, rose 0.6% from 5.5% to 6.1%.  The adjusted number of unemployed people was up 200,000 to 9.5 million.  There were also 200,000 more out for 27 weeks or longer, or 4.0 million.  Results unchanged were the number of those on temporary layoff (1.8 million), the labor force participation rate (61.6%), the employment-population ratio (58.0%), and, in effect, average private nonfarm payroll hourly earnings (up 7 cents to $30.40).

The real changes were among inputs to the American Job Shortage Number or AJSN, the metric showing how many more positions could be filled if everyone knew that getting one would be as easy as running an errand.  That gained 827,000, to reach the following: 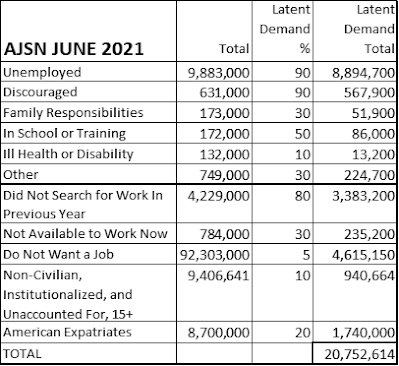 The total number of unemployed, unadjusted as is the entire AJSN, which jumped up over 1 million, was responsible for more than the measure’s entire gain.  Other factors, though, changed by unusual amounts.  The count of those out of the labor force fell from 100,603,000 to 99,172,000, a large difference for one month.  The number claiming no interest in working, here, was off just over 1.2 million.  The catchall “Other” category, also above, fell 16%.  As a result, even though we added jobs, so many people returned that we needed more positions than before.

Otherwise on the AJSN front, its share from those officially unemployed rose from 39.9% to 42.9%.  Compared with a year before, which was deeper into the Covid-19 crisis than now, the metric is 8.4 million lower, with all but one million of that from higher joblessness.

How can we best assess all of this?  We are still gaining filled jobs, but not huge quantities of them.  As always, people change their mind about whether they want to work depending on how they see their prospects, and many, this time, decided they had improved.  However, our 9.3 million advertised positions were lacking, as the count of those unemployed rose more than the net number of opportunities filled.  The coronavirus results say we were not sending people back to work too soon.  Overall, good but not great – the turtle has taken larger steps forward, but he did make another substantial one.