With last month’s issue causing concern about the intensity of the expected recovery, this morning’s Bureau of Labor Statistics Employment Situation Summary was a particularly important one.  Last time was superficially disappointing, but once we got under the surface, especially in conjunction with our pandemic results, it was generally good.

This time, though, was better even at first glance.  Although the number of net new nonfarm payroll positions, at 559,000, did not reach the consensus 650,000 to 675,000 prediction, it was still a healthy gain.  Seasonally adjusted unemployment fell from 6.1% to 5.8%, with the unadjusted version off from 5.7% to 5.5%.  The count of those jobless dropped 500,000 to 9.3 million, with those on temporary layoff down 300,000 to 1.8 million and people out for 27 weeks or longer decreasing 400,000 to 3.8 million.  The two measures of how many Americans are either working or one step away, the labor force participation rate and the employment-population ratio, were mixed, with the former down 0.1% to 61.6% and the latter up the same amount to 58.0%.  The total of people working part-time for economic reasons, or holding on to part-time work while thus far unsuccessfully seeking full-time propositions, gained 100,000 to 5.3 million.  Average hourly private nonfarm payroll earnings increased substantially again, this time 16 cents higher to reach $30.33 – that continues to reflect higher wages as well as lower paying positions still unrestored.

The American Job Shortage Number or Ajsn, the measure showing how many new positions could be quickly filled if all knew they were easy and routine to get, increased 169,000, to reach the following: 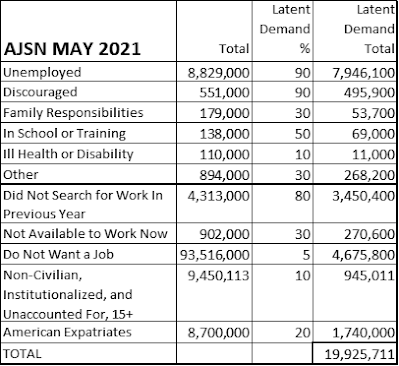 The largest differences from April were the effect of those unemployed, reducing the AJSN by 351,000, along with people not looking for a year or more, adding 278,000 to the metric, and a jump in those non-civilian, institutionalized, or off the grid, which was in effect a correction since newly implemented census results showed about two million more Americans than previously projected, which added 201,000.  If the overall population were the same for both months, the AJSN would have been almost unchanged.  The AJSN’s share from official joblessness for May was 39.9%, down from April’s 42.0%.  The statistic may now be somewhat overstated, due to those getting unemployment compensation not being required to search for work, but that was nothing new in May, has already changed in some states, and will follow in more.

The overall results here were only slightly positive, so how did we do at the same time with the coronavirus?  Per the New York Times, the 7-day average of new daily cases fell 53% from April 16th to May 16th, reaching 33,040.  The same average of deaths was off 18% to 611, and the number of people hospitalized, calculated the same way from the same dates, lost 25% and is now at 33,693.  The number of daily vaccinations, though, decreased 44% to 1,886,917, reflecting, with 41% of Americans now fully vaccinated, quickly dropping demand.

It is simple, then to evaluate how we did with employment this time.  We did fine.  We can see that the increase in people going back to work, though not massive, did not interfere with national pandemic recovery.  While this month was not flawless, the turtle took another solid step forward.