Once again, the American employment situation improved, though not in the ways we expected.
Again we didn’t make the projected increase in net new nonfarm payroll positions.  It was 204,000, and we missed that by 40,000.  But, once more, the other numbers more than compensated.

What Are Your Worst Grief Triggers ?
Universal Tips on How to Promote Your…
MICRO BUSINESSES
The big news was the headline seasonally adjusted unemployment rate ending its six-month stay at 4.1% in the good direction.  Its current 3.9% is the lowest it has been since December 2000, and came with a 300,000 cut in the number of officially jobless people, to 6.3 million.  The unadjusted rate also reached a long-term low at 3.7%, the difference showing that April is an above average month for jobs.
The worst of this morning’s readings were in the labor force participation rate and employment-population ratio.  These measures of how common it is for Americans to be working went down, falling 0.1% apiece to 62.8% and 60.3% respectively.  Although both greatly improved earlier this year, these have now given back about half of that gain, a seemingly unusual result given unemployment’s drop.  The count of the long-term jobless, those without work for 27 weeks or longer, stayed the same at 1.3 million, as did the number of people working part-time for economic reasons, or holding on to short-hours propositions while unsuccessfully seeking full-length ones, still at 5.0 million.
The American Job Shortage Number or Ajsn, which shows in one figure how many new positions could be filled if all new that getting one were as easy as ordering a pizza, also improved more than the season would indicate (the AJSN is unadjusted), down 492,000 from March as follows: 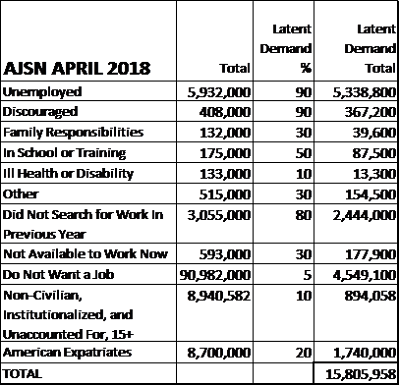 The nature of the drop, though, tells us why the two percentage indicators of working-likelihood worsened.  While latent demand from officially jobless people fell 665,000, over a quarter of that was offset by a 238,000 rise in the number wanting employment but not looking for it for a year or more.  There were also increases in the counts of those currently and temporarily unavailable and those claiming no interest in jobs, though the discouraged category fell more than 10%.
Compared with a year before, the AJSN is down just over 800,000, with over two-thirds of that difference coming from reduced official unemployment and the rest more or less from an annual cut, despite this month’s worsening, in those wishing to work but not trying for 12 months or longer.
The monthly AJSN decrease, and more so the annual one, is another outcome in support of the interpretation, accurate I believe, that our employment situation is still improving.  Jobs growth is only sitting around the 130,000-140,000 needed to cover our population increase, but with other numbers tending to improve, even with their advances in the past few years, that is good enough.  Once again, the turtle took a small but significant step forward.