The news is in from two classic American places this morning.  The first was discouraging but expected.  Washington, though, did better than Gobbler’s Knob.
We were led to anticipate a poor Jobs Report, with indifferent employment gains at best, after how much, a year ago, January dropped off from December.  Once again, though, this morning’s Bureau of Labor Statistics Employment Situation Summary was more moderate than expected.  While unadjusted joblessness did worsen considerably, from 3.9% to 4.5%, the adjusted version held at 4.1%.  We added 200,000 net new nonfarm payroll positions, half again what we needed to cover population growth.  The count of long-term unemployed, or those officially jobless for 27 weeks or longer, shed 100,000 to reach a new prerecession low of 1.4 million.  Average private nonfarm wages added 9 cents to a 2-cent December adjustment and is now at $26.74, for the past year up 2.9% and more than inflation.  The two measures of how common it is for Americans to be working, the labor force participation rate and the employment-population ratio, held for the second straight month at 62.7% and 60.1% respectively.

Useful Tips for Building a Stronger C…
Man Confronts Girlfriend For Wearing …
10 Attractive Circle Beard Styles & H…
Farm to School to Future!
Top 10 Highest-Paid Crypto Jobs in 20…
Bringing up the rear in January’s federal statistics were adjusted unemployment, which rose 100,000 to 6.7 million, and the count of Americans working part-time for economic reasons or holding on to part-time jobs while looking for full-time ones, up the same amount for the second straight month to 5.0 million.
The American Job Shortage Number or AJSN, the measure of latent demand which shows in one figure how many additional positions could be quickly filled if all knew they were available, gained 867,000, almost completely on unadjusted unemployment’s bump, as follows: 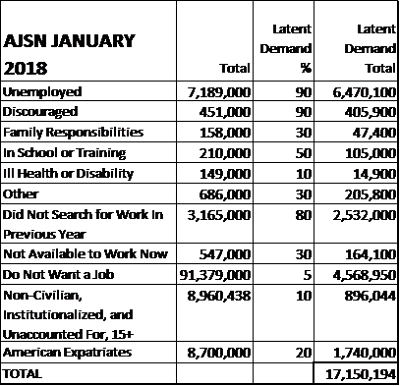 Comparing the AJSN with last January’s, though, gives a more encouraging story.  It is now almost 1.2 million lower, with more than one quarter of that difference coming from people marginally attached to the labor force, specifically those discouraged or not searching for work in the previous year.  There are also now about 1.1 million fewer Americans in the armed services, in institutions, or off the grid.  On the other hand, to what should be nobody’s surprise, the count of those claiming no interest whatever in working continued its steady climb with 1.9 million more, in large but hardly entire part from the increasingly aging population.
So how good a month was this January?  Quite respectable, if unspectacular.  We avoided as large a seasonal drop as we had last year, and the strong gain in jobs was not offset much by anything else.  Accordingly, I saw the turtle shake his legs and take a step forward.


This post first appeared on Work's New Age, please read the originial post: here
People also like
Useful Tips for Building a Stronger Company Culture
Man Confronts Girlfriend For Wearing Lingerie To Her Job At Burger King
10 Attractive Circle Beard Styles & How to Get Them
Farm to School to Future!
Top 10 Highest-Paid Crypto Jobs in 2022