I was surprised by this morning’s Bureau of Labor Statistics employment figures.  Were you?
I wrote last month that September’s data was mangled by the storms, giving us strange results such as the loss of 33,000 net new jobs.  Accordingly, we would need to combine it with October’s to get a fairer view of how our working economy is really doing.  So, what happened?

benefit of coconut milk
Karen Wiesner: I Have Dreamed a Littl…
CoinMENA Raises $9.5M Seed Fund
5 things to look for when shopping fo…
Among Physicians, Men Make More Than …
In October, we gained 261,000 net new nonfarm payroll positions.  That would normally be outstanding, but when we combine it with the last set and divide it by two we get 114,000 per month.  With population increase consuming over 130,000, that’s a slowdown.  Also on the down side, the two measures of how common it is for Americans to be working, the employment-population ratio and the labor force participation rate, erased and more than erased respectively their September improvements, going off 0.2% and a steep 0.4% to reach 60.2% and 62.7%.  Average private nonfarm payroll hourly earnings gave up a little of its large September improvement, down 2 cents per hour to $26.53.
Many of the other numbers were unexpectedly good.  The adjusted unemployment rate fell 0.1% to reach another post-Great-Recession low of 4.1%.  The unadjusted variety, lower since October is typically an above-average working month, achieved the same, shedding 0.2% to get to 3.9%.  These two numbers were also down, 0.2% and 0.4%, in September.  Those officially jobless and out for 27 weeks or longer cut another 100,000 to reach 1.6 million, and the count of people working part-time for economic reasons, or seeking full-time work while holding on to shorter-hours employment, plunged over 300,000 to 4.8 million.  In September the former Number stayed the same, but the latter one, which usually changes half that amount or not at all, improved 200,000.
The American Job Shortage Number or AJSN, which shows in one figure how many more positions could quickly be filled, dropped an unexpected half-million to reach another post-recession low, as follows: 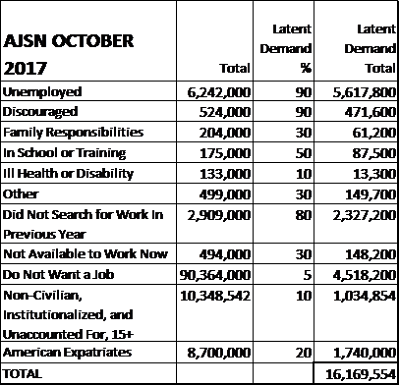 The AJSN’s drop was only partially caused by lower unemployment, which accounted for 282,000 of the difference.  More significant was a cut of almost 400,000 in those wanting to work but not looking for it in the previous year.  Both were offset slightly by increases in those calling themselves discouraged and a surprising 1.2 million gain, precipitating a 60,000 AJSN difference, in the count of those claiming no interest in employment.
Compared with a year before, important since the AJSN is not seasonally adjusted, it has dropped over 1.1 million, with almost that amount from lower official unemployment, and over 300,000 from the did-not-search-in-previous-year category partially neutralized by 1.2 million growth in those in the armed forces, in institutions, or off the grid, and by a 700,000 gain in the number of American-citizen expatriates now overseas.  The share of the AJSN coming from those officially jobless, now under 35%, reached another post-recession low, and means that almost two-thirds of those taking new positions would not be expected to be counted as unemployed.
Overall, how good was the data for the past two months?  Lukewarm.  Fewer people are unemployed, unemployed for six months or longer, or struggling with part-time positions instead of the full-time ones they want.  Wages are ahead of inflation.  Yet jobs growth and labor force participation are on the wane.  We’re only one number, specifically “did not search for work in previous year,” away from saying we’re going nowhere, and that work in America is continuing to depart, however slowly, from being the norm – and with that metric’s tendency to fluctuate without a long-term trend, that isn’t enough.  The turtle stayed put.