September a Strange Employment Data Month: We Lost Jobs, But Most Numbers Were Better, Including Latent Demand with the AJSN Showing We’re “Only” 16.7 Million Jobs Short

Tags: number september employment
October 6th 2017
View original
The story going into this morning’s Bureau of Labor Statistics September report was about our two major mainland-affecting hurricanes, Irma and Harvey, and what their consequence would be.  The numbers turned out worse, in some ways, than expected – instead of the consensus prediction of 90,000 net new nonfarm positions, we had a loss of 33,000 – but otherwise, headed by the seasonally adjusted unemployment rate which instead of breaking even as projected improved from 4.4% to 4.2%, they got better.  September seemed to be a good month, with unadjusted joblessness off from 4.5% to 4.1%, average private nonfarm wages up 12 cents per hour to $26.55, the count of those working part-time for economic reasons or keeping shorter-hours positions while unsuccessfully looking for full-time ones down 200,000 to 5.1 million, and the two measures of how common it is for Americans to actually be working, the labor force participation rate and the employment-population ratio, up 0.2% and 0.3% to 63.1% and 60.4% respectively.  The Number of long-term jobless, however, did not improve, holding at 1.7 million.

How come so many Christians don’t rea…
Why PPE Is Crucial for Health and Saf…
9 Best Pubic Hair Trimmers for Safe &…
Zuma Office – FREE Pentel Oil Pastel …
Save Cost And Time With This Guide On…
The categories of marginal attachment mostly bettered as well.  The number of those wanting work but neither officially unemployed nor looking over the previous year dropped over 300,000 to reach 3.3 million, while that of those claiming to be discouraged and those wishing for employment but momentarily not available for it fell as well.  The counts of those purporting no interest in employment and people wanting work but currently in school or training were exceptions.  Overall, the American Job Shortage Number or AJSN, the monthly measure of latent demand for jobs across 11 different employment categories, fell 940,000 to reach its lowest outcome since April, as follows: 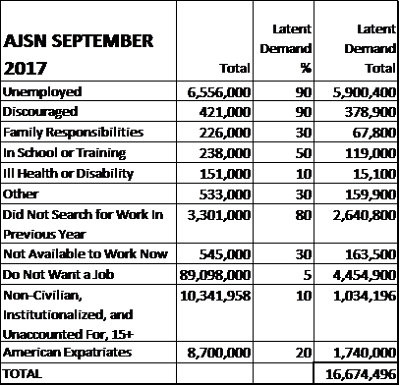 Since the AJSN is not seasonally adjusted, we expected some decrease between relatively jobs-poor August and jobs-rich September, but the drop was more than that.  That was also shown in the difference between last month and a year before, also over 900,000 and almost all due to the almost exactly one million cut in the number of officially unemployed.  Note that according to the BLS, “persons with a job are counted as employed even if they miss work for the entire survey reference week… regardless of whether or not they are paid.”  Although that 7-day-period started the day Irma reached the Florida coast, this BLS rule, unless people knew their jobs were gone with the storm, canceled out most of its September statistical effect.
It is peculiar indeed that employment data for a month with so few work opportunities added should look so good, not only in spots but otherwise across the board.  Overall, it is now best to judge September’s data as showing potential but not yet solid improvements.  If its gains hold, and October’s new positions reach at least 300,000, we can take credit for an unexpectedly fine month.  If not, we will need to average these two together to see just how well we are doing.  So, although I couldn’t clearly see the turtle through the wind and rain, I think I saw another step forward.


This post first appeared on Work's New Age, please read the originial post: here
People also like
How come so many Christians don’t really know God?
Why PPE Is Crucial for Health and Safety in the Workplace
9 Best Pubic Hair Trimmers for Safe & Painless Grooming
Zuma Office – FREE Pentel Oil Pastel Set
Save Cost And Time With This Guide On Hiring Graphic Designers
Best homebrew games for your A500 Mini

September a Strange Employment Data Month: We Lost Jobs, But Most Numbers Were Better, Including Latent Demand with the AJSN Showing We’re “Only” 16.7 Million Jobs Short