According to the prognosticators of record, July was supposed to be another winner for employment, and it was.  We added another 209,000 net new nonfarm payroll positions, almost matching June’s 222,000.  Seasonally adjusted unemployment returned to its May 4.3% level, and the two measures of how common it is for Americans to be working, the labor force participation rate and the employment-population ratio, each matched June’s 0.1% gain to return to their April levels and end concern about May’s beginning a trend.  Average hourly earnings, for the first time in three months, increased more than inflation, to reach $26.36.

Should the ends justify the means wit…
Megan Thee Stallion Details Alleged T…
20 Deep-Rooted Beard Myths Busted Onc…
Life Extension – Lab Test Sale
Best homebrew games for your A500 Min…
The other measures were flat or slightly down.  The adjusted number of unemployed Americans stayed at 7.0 million.  The count of those working part-time for economic reasons, or holding on to less than full-time positions while seeking ones with longer hours, stayed at 5.3 million.  The number of long-term jobless, or those without work for 27 weeks or longer, stepped up 100,000 to 1.8 million, and the unadjusted unemployment rate gained 0.1% to reach 4.6%.
The American Job Shortage Number or AJSN, which shows in one figure how many more positions could be quickly filled if all knew they were easy to get, shrugged everything off and increased a mostly but not entirely seasonal 154,000, as follows: 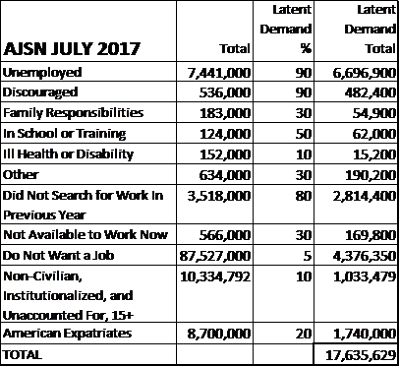 July’s gain was essentially all due to higher official unemployment, which rose 191,000 over June’s.  Otherwise, the categories of marginal attachment above changed little, with none adding or subtracting more than 20,000 fillable jobs.  The AJSN’s 766,000 improvement over a year before was much the same story, with Bureau of Labor Statistics-defined joblessness responsible for 743,000 of that.
A simple month, a simple report.  The positives clearly outweigh the modest negatives, and, although progress is sketchy outside that 209,000 payroll gain, we don’t need much more to call these relatively good times.  We’ll continue watching.  As for July, the turtle, once again, took a small step forward.


This post first appeared on Work's New Age, please read the originial post: here
People also like
Should the ends justify the means with Donald Trump?
Megan Thee Stallion Details Alleged Tory Lanez Shooting: ’He Said, ‘Dance, B—,’ and He Started Shooting’
20 Deep-Rooted Beard Myths Busted Once and For All
Life Extension – Lab Test Sale
Best homebrew games for your A500 Mini
How Real Estate Companies Are Growing With Blockchain Technology?