Latent Demand for Jobs, Most from Those Not Officially Unemployed, Lowest Since Great Recession as AJSN Drops to 16.6 Million

Once again, the American Employment situation exceeded its expected improvement.
Estimates called for a gain of 189,000 net new nonfarm positions, with the adjusted jobless rate worsening from 4.5% to 4.6%.  We got 211,000, and a bettering to 4.4%.  Other key numbers, while mixed, were generally also positive, with the count of those Officially Unemployed for 27 weeks or longer down 100,000 to 1.6 million, and the number of people working part-time for economic reasons, or wanting full-time engagement while holding on to something with fewer hours, plunging 281,000, rounding to 300,000, to 5.3 million.  The two measures showing best how common it is for Americans to have jobs, the employment-population ratio and the labor force participation rate, were split, with the former up a significant 0.1% to 60.2% and the latter down the same amount to 62.9%.  Average wages were adjusted 2 cents per hour downward for March, but even with that are up another nickel, more than inflation once again, to $26.19.  Best of all was the unadjusted employment rate falling 0.3% to a clearly prosperous 4.1%.

64 Awesome Things to Do in Costa Rica…
How come so many Christians don’t rea…
When does Botox Kick in for Your Pati…
30 Epic 50s Hairstyles for Men That A…
iHerb – 38% off LactoBif Probiotics
The measures of marginal attachment, though, did not improve.  The count of people wanting work but not looking for it over the past year, those also desiring employment but temporarily unavailable, and those with a similar view but out for Ill Health or disability all rose.  Those claiming no interest whatever in a job continued its steadyish rise upwards, up over 200,000 to 89,210,000.  Overall, the American Job Shortage Number, which shows in one figure how many more positions could be quickly filled if getting one were as easy as getting a pizza, was down over 600,000, as follows: 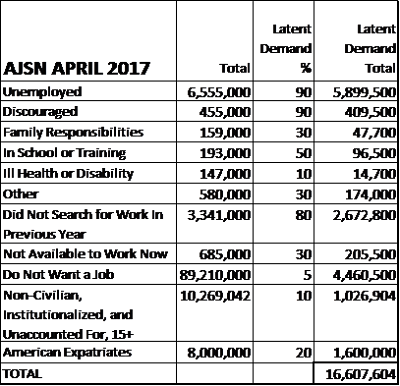 Compared with a year before, the AJSN has dropped over 700,000 from 17.3 million, completely from lower official joblessness.
Even though times are clearly improving, we have one cause for concern.  The statuses outside official unemployment are almost all collecting more people.  A year ago, although there were 858,000 more technically jobless, there were fewer in the family responsibilities, in school or training, ill health or disability, other, and did not search for the previous year categories.  There are now 400,000 more Americans saying they do not want to work than in April 2016, some of whom would change that view if the right position came along, and the non-civilian, institutionalized, and off-the-grid total is almost 900,000 higher.  All told, if this many opportunities were created and filled, more than 64% would go to those not officially jobless.  There are still plenty of potential workers on the sidelines, and most are not getting unemployment checks.  They should not be ignored, and constitute a real social change about which organizations seeking employees should be aware.  In the meantime, the turtle, who would be surprised if he looked behind him to see how much ground he has covered over the past two years, took another clear step forward.


This post first appeared on Work's New Age, please read the originial post: here
People also like
64 Awesome Things to Do in Costa Rica, Where to Stay, Know Before You Go
How come so many Christians don’t really know God?
When does Botox Kick in for Your Patients?
30 Epic 50s Hairstyles for Men That Are Popular Again
iHerb – 38% off LactoBif Probiotics
Why PPE Is Crucial for Health and Safety in the Workplace

Latent Demand for Jobs, Most from Those Not Officially Unemployed, Lowest Since Great Recession as AJSN Drops to 16.6 Million