This morning the headline jobs number came in much worse than expected.  Far from a projection of 180,000, there were only 98,000 net new nonfarm positions created in March.  But don’t let that fool you.

benefit of coconut milk
Karen Wiesner: I Have Dreamed a Littl…
CoinMENA Raises $9.5M Seed Fund
5 things to look for when shopping fo…
Among Physicians, Men Make More Than …
Almost everything else improved, starting with stunning drops in the official unemployment rates.  The one you hear about the most, seasonally adjusted, did not stay at 4.7% as some expected but fell to 4.5%.  The unadjusted figure, higher since in March fewer people are working than in an average month, plunged even more, from 4.9% to 4.6%.
The other results were consistently favorable.  The count of long-term unemployed, or people officially jobless and out for 27 weeks or longer, was off 100,000 to 1.7 million.  The tally of those working part-time for economic reasons, or unsuccessfully seeking full-time work while maintaining shorter-hours employment, also dropped 100,000, reaching 5.6 million.  Average private nonfarm wages were up a nickel an hour to $26.14, nothing trivial when inflation is less.  While the labor force participation rate stayed at a strong-by-recent-standards 63.0%, the employment to population ratio, helped by lower joblessness, ticked up 0.1% to 60.1%.
The American Job Shortage Number or AJSN, which shows latent demand for work, or how many more American positions could be filled if getting one were known to be easy and routine, dropped a surprising 647,000, with the categories of marginal attachment adding 105,000 to the effect of reduced official joblessness, as follows: 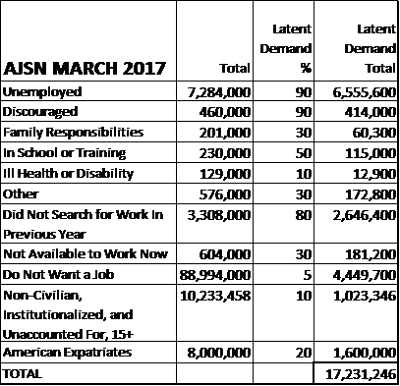 Compared with a year before, an important evaluation since the AJSN is not seasonally adjusted, the metric is down 584,000, with lower unemployment partially offset by a substantial increase in the count of those reporting interest in work but not having looked for it for at least a year.
The net new jobs disappointment, and its failure to match those needed for population increase, notwithstanding, March was clearly a positive month.  With room to spare in February’s 235,000 gain, the data gives no signs of a correction, and already excellent figures such as the unemployment rates are still improving.  The share of latent demand coming from official joblessness is now only 38%, meaning that there is too much unfulfilled general interest in work for the economy to be as robust as that 4.5% would indicate.  Yet the turtle, once again, did take a step forward.