February: Almost Every Jobs Number Improved, Including the AJSN Showing Latent Demand Down to 17.9 Million

This morning’s Bureau of Labor Statistics employment data was superb.
All 9 of what I consider the front-line BLS statistics were positive.  Nonfarm Payroll employment went up 235,000, about 100,000 more than our population increase absorbed.  Seasonally adjusted unemployment was down 0.1% to 4.7%, and the unadjusted one fell 0.2% to 4.9%.  The total number of officially jobless Americans was off 100,000 to 7.5 million, including 1.8 million out for 27 weeks or longer, also down 100,000.  The count of those working part-time for economic reasons, or seeking full-time work while holding on to part-time labor, now 5.7 million, dropped the same amount.  The two measures showing how common it actually is for people to have jobs, the labor force participation rate and the employment-population ratio, after gaining a large 0.2% apiece last month, were each up another 0.1% to reach 63.0% and 60.0% respectively.  Average nonfarm payroll earnings, which had done well recently, were given another positive adjustment, and might have been due for a correction, were up a well-over-inflation 6 cents per hour to $26.09.

Why PPE Is Crucial for Health and Saf…
9 Best Pubic Hair Trimmers for Safe &…
Zuma Office – FREE Pentel Oil Pastel …
Biden official says U.S. will likely …
The American Job Shortage Number or Ajsn, which shows in one non-seasonally-adjusted figure how many more positions could be quickly filled if getting one were as easy as getting a pizza, also improved, as the counts of people in most statuses of marginal attachment improved as well.  Overall, the AJSN fell 448,000, as follows: 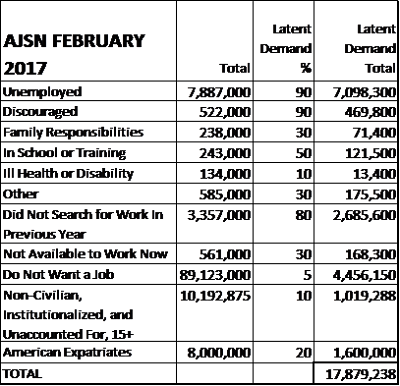 Compared with a year before the AJSN is almost 300,000 lower, with almost exactly that amount due to a drop in official unemployment.  Otherwise, the largest changes were in those reporting they wanted to work but did not search for it in the previous year, down 269,000 for a latent demand reduction of 215,200, and in those who fall through the cracks, the non-civilian, institutionalized, and unaccounted for, up almost 1.5 million since February 2016 and thus expectable to absorb about 150,000 more positions.
There is no doubt about the strength of this data.  February was the best month in years, with its advance unusually broad-based.  The AJSN went along with that, with its large improvement completely meaningful as similar numbers of people usually work in January and February.  The only bad news is that another interest rate hike is now almost certain – however, if it is small, the economy can take it.  As for the turtle, he took another step forward – and even stretched in the process.

February: Almost Every Jobs Number Improved, Including the AJSN Showing Latent Demand Down to 17.9 Million