November: Unemployment and AJSN Both Down, Latter Showing a Shortage of 16.9 Million More Jobs

It was another good, steady, positive month on the employment front.
The marquee Number of seasonally adjusted joblessness will take the headlines this morning, and well it should, since it fell 0.3% to 4.6% to reach the lowest level since December 2006.  The unadjusted figure matched that with a drop to 4.4%.  The next best was the count of those working part-time for economic reasons, or keeping shorter-hours positions while seeking full-time ones, down 200,000 to 5.7 million.  The number of people officially unemployed for 27 weeks or longer was also off, 100,000, reaching 1.9 million.  There were 178,000 net new nonfarm jobs created, below a published estimate of 208,000 but continuing its steady trend of coming in at more than needed for incoming people.  The employment to population ratio remained at 59.7%, and the labor force participation rate worsened, down 0.1% to 62.7%.  The poorest news was in average private nonfarm hourly earnings, which, following a 13-cent gain in October, fell back 3 cents to $25.89.

Albania: Explore the Forgotten Side o…
How come so many Christians don’t rea…
Why PPE Is Crucial for Health and Saf…
The American Job Shortage Number or Ajsn, which shows in one non-seasonally-adjusted number how many more positions we could fill if getting one were quick, easy, and routine, hit another post-recession low, though its change was not as extreme as in the unemployment percentages.  That was because while the count of people officially unemployed fell almost 400,000, and those wanting work but not looking for it during the previous year was off a surprising 331,000, those improvements were offset somewhat by gains in those discouraged, people claiming no interest in a job, and the “other” category of those wishing to be employed but having a specific reason why that was not possible now.  Overall, the AJSN was off 455,000 from October, as follows: 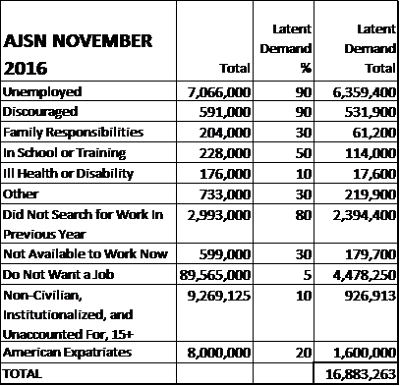 Compared with November 2015, the AJSN is down 347,000, with demand from those counting as unemployed showing a 456,000 improvement, but with that from other statuses, particularly the number of expatriates, the Other category above, and those wanting work in general but now in school or training, working against that.  We would need to go back to 2008 to find any month at all with a lower AJSN.
Overall, despite the small negatives and lack of truly large job creation, November gets a thumbs-up.  Our incoming presidential administration will have its hands full improving further.  I hope those responsible for understanding our need for more employment opportunities know that less than 38% of them, even after disregarding those filled by people working already, would go to those officially jobless.  Meanwhile, the turtle, once again, took a modest but unmistakable step forward.


This post first appeared on Work's New Age, please read the originial post: here
People also like
Albania: Explore the Forgotten Side of Europe – 15 Best Things to Do in the Albanian Lands
How come so many Christians don’t really know God?
Why PPE Is Crucial for Health and Safety in the Workplace

November: Unemployment and AJSN Both Down, Latter Showing a Shortage of 16.9 Million More Jobs