Don’t Pick One, You Have The Power to Choose Both 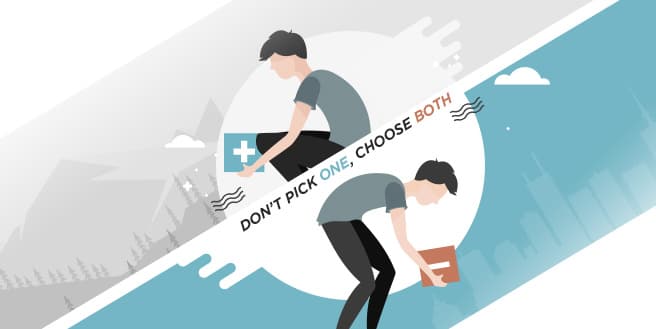 More often than not, people get easily swept by the latest trend taking over the internet. Be it the newest challenge or a song that have gone viral. People consciously follow them religiously and those who say they don’t, subconsciously stays in touch.

It’s the prevailing mindset of everyone particularly in terms of modern technology. A year after the much-awaited release of Apple’s Iphone 6, fanatics immediately dropped them when announcements for the newest model made its rounds. It is easy for society to simply drop the old ones to make room for the new ones.

And though it’s hard to believe, sometimes, opting for what’s new won’t go the way we want it to. Instead, finding a way to utilize both the old and new is the best way to go. One great example of this Principle would be during the peak of electronic books or e-books in the market.

When electronic reading mediums such as Kindle was introduced to the public, the printing industry was put in danger. Between the years 2008 and 2010 alone, the sales of e-books escalated to 1,260 percent causing a few print booksellers to into bankruptcy. It seemed then that the time that print books is almost over.

But much to the surprise of many, instead of going to an upwards trajectory, e-book sales began to decrease. In the first few months of 2015, it already fell by 10 percent. All the while, the American Booksellers Association expanded to 1,712 member stores in almost 2,227 locations within the same year from 1,410 in 1,660 locations five years earlier.

The Power to Choose Both

Amidst the numerous publications who have gone digital, one company made the conscious decision to choose both.

Penguin Random House decide to expand and update its warehouses as well as speed up the distribution of its books by investing nearly $100 million on the shift from their traditional operations. Some have traced back the inversion to print to the escalating prices of e-book while there are some who said that a handful of bookworms who still missed the feeling of a heavy paperback in their hands. Other buyers have said that enthusiasts have found a way to utilize both e-books and actual books.

In the end, consumers created a middle ground for both traditional and modern tool to contribute to the overall pleasure of reading.

By knowing what both sides have to offer to the situation at hand, we get a better understanding of how the Both/And principle could fit to certain circumstances. Kinder may never replace the feeling of an actual paperback, at the same time, books can never recreate the immediate assistance of Kindle’s dictionary system. Both the old and the new carries distinct individual strengths, hence, having the option to choose both isn’t a bad idea after all.

There are several other existing examples that fortifies the advantages of the principle to always choose both available options. There’s the commercial real estate market who have taken use of it to their advantage.

The innate nature of the world of business to be in constant state of flux have rendered Office space providers to become innovative and adaptive to the passing trends of the industry. As modern technology made it much easier for humankind to work anywhere they want, more and more people are turning away from traditional work areas. Pioneers of the new movement found a way to instill the need for an actual office to the newer needs of professionals. Serviced offices such as coworking spaces and private offices made sure that the new generation of startups remained true to the tradition of having their own headquarters. Though they started catering to most remote workers of today, they still managed to aid the needs of the older members of the workforce.

The post Don’t Pick One, You Have The Power to Choose Both appeared first on Salesrain BPO.

This post first appeared on Don't Chain Yourself To A Desk, please read the originial post: here
People also like
Building a Talent Pool in a Tight Market
Lustre ajustable Chrome Aire 16L Mantra
Easy Pet Rocks Craft Idea For Kids
The Sign of Four
10 of the best rural glamping hideaways in Britain
Day 4 – How to Rehab a Painful Shoulder
Proven Methods for Successful Weight Loss
Giant Piece of Space Junk Expected to Crash into Earth this Weekend

Don’t Pick One, You Have The Power to Choose Both