58 years after Dr. Kings "I have a dream speech" we are still fighting the same battles 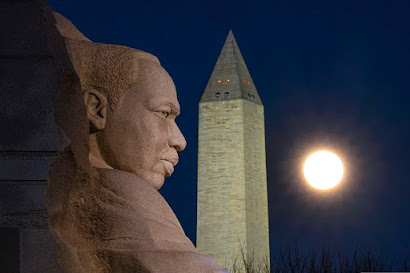 When President Ronald Reagan signed the bill creating a federal holiday honoring the Rev. Dr. Martin Luther King Jr., he warned that “traces of bigotry still mar” the country.  After the racial strife of the summer of 2020 Reagan’s words seem like the understatement of the 20th century; it would be an understatement today.

In late August of 1963, Dr. King spoke in his “I Have a Dream” speech of the “sweltering summer of the Negro’s legitimate discontent” on the steps of the Lincoln Memorial --- not far from where armed insurrections last week tried to overturn an election decided, in part, by Black southern voters.  He said it not far from the White House, where on the first day of June the president of the United States ordered the tear-gassing of peaceful protesters to clear his way for a photo op.

President Trump held up the same Bible from which King preached to send the opposite of his righteous message: exhorting governors to “dominate the streets” with troops to silence Black Americans, who, in their own summer of discontent, were crying out precisely against being dominated. The killing of innocent men such as George Floyd by police, the incarceration of so many more for minor offenses, the systemic neglect and disenfranchisement of communities of color even in an age when redlining and voter suppression are supposed to be illegal. These are the so-called traces of bigotry that continue to disfigure our country.

Dr. King also warned of two Americas one full with the “sunlight of opportunity” and the other with a “daily ugliness about it that transforms the buoyancy of hope into the fatigue of despair.” The reality that the invigorating autumn of which King dreamed has not yet arrived is met with resistance today, too. It is easier to think about how far we’ve come than how far we’ve yet to go.

But without thinking about the great distance to our destination, we will never get there.

58 years after Dr. Kings "I have a dream speech" we are still fighting the same battles