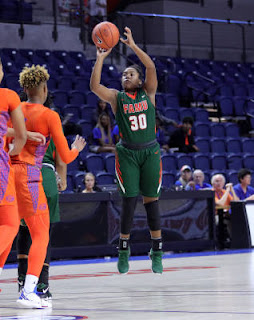 There was a huge sense of relief that could be sensed from FAMU Head Coach LeDawn Gibson and her team, as the final buzzer sounded at the Lawson Center Monday, signaling the Rattlers first win in conference play against the Delaware State Hornets, 57-52.

After Saturday’s humbling defeat to Maryland Eastern Shore, the Rattlers came out of the gates with intense energy, and precision on the offensive end, scoring 21 points in the opening period of the game on 63% shooting from the field.

A new starting line-up for FAMU, which included typical reserves Morgan Mitchell and Jasmine Ballew as starters, was a major reason the Rattlers got up to such a big lead which ballooned to as much as eleven in the first period.

In her post-game press conference coach Gibson said she attributed the inspired start on offense to improved effort on defense.

“When I was looking at who to start the game with I looked at seeing who would bring the most pressure on defense”.

The defense was definitely a catalyst for the Rattlers great start, playing a mix of 2-3 zone and half court presses is what held the Hornets to twelve first quarter points on 23% shooting.

However, it would be a painful second quarter on offense for the Rattlers, only scoring 3 points in the period on 1 for 14 shooting. The lackluster offensive performance, including seven turnovers is what allowed the Hornets back into the game, even taking their first lead of the game right before halftime with a 26 to 24 advantage.

“We are going to look at film and see where we were making mistakes and how to improve on them to avoid quarters like that going forward” said Gibson.

Despite the less than optimal way they finished the first half, the Rattlers came out ready to clean the slate to start the second half just like they did at the beginning of the game.

The turning point of the game came in the third quarter when Jasmine Ballew caught on fire and scored eleven straight points for FAMU, including three straight three pointers.

“They just kept leaving me open in the corner,” Ballew said with a smile in the post game press conference. The run is what helped propel FAMU ahead and it was a lead they would never surrender again for the remainder of the game.

Ballew was the leading scorer for her team, leading the Rattlers with 14 points with teammate Dy’Manee Royal right behind her with 12 points to go along with her 10 rebounds in a double-double effort for the team’s star forward.

Usual starter Mya Moye embraced her role change to sixth man off the bench, leading all bench scorers with 10 points.

For Delaware State, it was NaJai Pollard who showed up to play leading all players in points with 22 and in rebounds with 13. She and starter Lanayjha Ashe played every second of the contest and still had enough energy to force a run to try to close the gap.

However, it would be an improved effort from the Rattlers at the charity stripe that would fend off the furious rally from the Hornets.

“It is truly a morale boost and it felt amazing to see the team smiling instead of mad in the locker room after the game,”Gibson said to close her press conference.

FAMU (3-14, 1-4 MEAC) will take a two-game road trip this weekend, as the team travels to Baltimore to play Coppin State on Saturday followed by Morgan State next Monday.