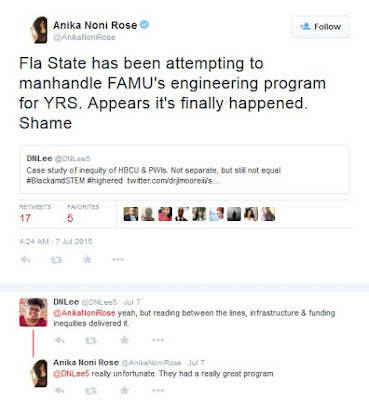 Back when Anika Noni Rose was a theatre student at Florida A&M University, Frederick S. Humphries was her president. She watched while he battled to make sure that the university kept control of the multi-million dollar budget for the FAMU-FSU College of Engineering (COE).
Humphries struck a deal with Florida State University President Bernie Sliger in 1987 that gave FAMU control of the budget in exchange for an agreement to support Innovation Park as the building site for the COE. The deal was made final by the 1987 “Memorandum of Agreement.”

14 Best Black Friday Deals on Refrige…
Details To Remember When Planning a W…
Best Above-Ground Swimming Pools Avai…
How to Take Advantage of Technology t…
Cornell University and Pool & Hot Tub…
But FAMU’s control of that budget came to an end in 2015.
That year, a new FAMU administration gave its backing to a proposal to shift the $12.9M COE legislative appropriation from the FAMU general revenue line to a new budget entity. The new FAMU administration then joined FSU in stating that a new Joint College of Engineering Governance Council would call the shots on the COE operating budget. That made it possible for the FSU representatives and BOG Chancellor Marshall Criser, III to out-vote FAMU on budget decisions.
On May 20, 2015, the council also unanimously voted for the $12.9M appropriated for the COE to be released to FSU instead FAMU.
Those changes all happened even though the FAMU Board of Trustees never voted to give up budget control of the COE.
Rattler Nation broke the news about the plan to take away FAMU’s budget authority of the COE on June 26, 2015. HBCU Digest followed upwith a story on the COE on July 2, 2015 and Diverse: Issues in Higher Educationran a story on the COE on July 6, 2015.
Humphries responded to the Diverse: Issues in Higher Education article on his Facebook page the next day.
“I believe this to be a significant blow to FAMU, in particular, and HBCUs in general,” Humphries wrote.
That same day, Rose also spoke out against FAMU losing budget control of the COE.
“Fla State has been attempting to manhandle FAMU’s engineering program for YRS. Appears it’s finally happened. Shame,” Rose wrote in the tweet sent July 7.
FAMU Faculty Senate Bettye A. Grable also later criticized the shift of the COE appropriation from FAMU to FSU.
She wrote that “the decision to move the [FAMU-FSU College of Engineering’s] budget control to FSU was based on a unilateral approval without the prior approval by the Board of Trustees and other constituents.”
But even after the public outcry from the leadership of FAMU Faculty Senate and FAMU National Alumni Association, the FAMU alumni who were in the Florida Legislature at that time chose to ignore the issue and just let FSU and BOG chancellor run over their alma mater in the COE.
Rose is a real Rattler who spoke up for FAMU at a time when a number of others who claimed to care about the university didn’t.


This post first appeared on Rattler Nation, please read the originial post: here
People also like
14 Best Black Friday Deals on Refrigerators
Details To Remember When Planning a Wedding
Best Above-Ground Swimming Pools Available in Australia (2022)
How to Take Advantage of Technology to Save Money
Cornell University and Pool & Hot Tub Alliance Announce Executive Leadership Program
AMD vs Intel: Which one has the best CPU in 2022?
The 5 Best Exercises to Get Rid of Sciatica Pain In the Hip and Lower Back   
CGTN: A powerful Chinese military contributes to global stability
After Escaping the Taliban, This Afghan Couple Is Reunited in Las Vegas
Therapy for Young Adults: What To Expect, The Benefits And Where To Find Help