Are we as a planet overpopulated ?

The top of the mind answer to this question would be an unqualified “yes”. The Maltusian prognosis of death by overpopulation seems to be coming true when we see visuals of overcrowded trains, cramped living spaces, festering slums and clogged roads.

However that is not overpopulation. It is congestion.

With congestion we get cramped for living and moving space. Because of rapid urbanization, prevailing economic paradigm and the failure of strategy of urban planners, most urban human clusters are definitely getting congested.

However the question remains: As a specie with 7billion members on the planet are we overpopulated? To reframe this question, we should ask : What is the Earth’s human carrying capacity.

Now the answer to this question becomes rather ambiguous. EO Wilson the famous biologist, factoring in the food security estimated the Earth’s capacity at 10B humans (if everybody turned vegetarian so that animals grazing pastures can be utilized for crop production) while other estimates, factoring in sundry environmental factors also put earth’s carrying capacity estimates at around 10-11Billion.

So the surprising answer to the question of overpopulation is a NO at the moment. At our current population of 7B we are probably at 2/3rd level of our peak capacity. However this good news should be tempered by the bad. By 2100, discounting an epidemic, alien attack or zombie apocalypse, we are slated to reach our peak capacity levels. That will be the tipping point where more draconian policies (like China does) “one kid per family” will have to be adopted worldwide. All individual liberty would then be at an end.

To avoid reaching that level, the solution propagated by rich countries, who are also the main sponsors of all World Bank and other population studies is, that developing countries should reduce population. However the solution to our population management, at a sustainable level, lie in three parts:

1) More Technology
We need to be able to find less water intensive way of producing crops, as also drinking water technologies would need an overhaul. Lab grown meats should replace animal meat as also we have to find ways to recycle the trash and greenhouse gases produced by humans. Finally if we can set up a colony on another planet in next 100 years that would take some load off earth.

2) Less Consumption
Rich countries have been guilty of consuming disproportionate amount of earths commons, polluting environment and appropriating large amount of wealth and resources. A sustained campaign has to be run in developed countries for next 2-3 decades asking people to consume less and share more. A rich man in days to come will not be one who has ten cars but who lives in a city where public transport is used by everyone.

3) Less People
Because of the sustained campaigns in last 3 decades fertility rates across the world are dropping and the current global rate of 2.1 kids per family are near the replacement rates ( 2.1 kids replacing two parents and any young adult deaths). Thus this fertility rate needs to be maintained at the current levels or can also be reduced a little in days to come.

So in nutshell the surprising answers to the question asked at top of this post are :
1) we are not too populated yet but too crowded.
2) We do not need to reduce number of kids per family but the average consumption per individual. 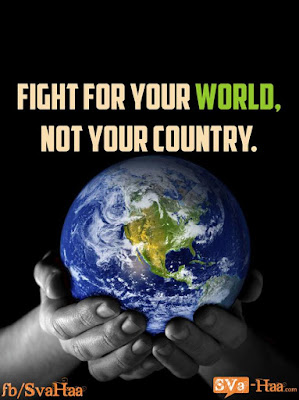 A Comparison of the Environmental Imp…
Biology Notes PDF Download In Hindi S…
‘The Angry Cabbage’. A Vegetable Rese…
Merry Christmas and Mahatma Gandhi
What Marathon Running and Successful …