What is The Difference Between the 3 Main Types of Iron Filter Media?

We use a few different methods used to remove iron and Manganese from well water.

Iron and manganese are typically found in groundwater in a dissolved state and have a clear color.
While there are various less common treatment methods used (such as ion exchange and ultra-filtration), the most effective and popular systems oxidize (turn to rust) the clear state of iron to a rust or solid form so the solid particles can then be filtered out.

Darmowe widgety
Creating and Selling Digital Products
Pineapple juice benefits for skin
How To Invest in Real Estate With no …
The oxidation step can be accomplished with aeration, chlorine (gas, sodium hypochlorite, calcium hypochlorite or on-site generation of sodium hypochlorite), chlorine dioxide, potassium or sodium permanganate, or ozone.

The most common methods are aeration and chlorine injection.

Oxidation… Then Filtration
Filter Media is the granular sand-like media found in backwashing iron filters.
The filter media used in the filtration step after oxidant injection can be generally divided into three types:
Sand and Anthracite Dual Media
Filter sand combined with a top player of anthracite coal, typically employed with conventional sedimentation and filtration have been used for many years to remove iron and manganese. These processes require careful operation to achieve complete removal.
They often operate at lower flow rates compared to Manganese Dioxide media. A big advantage is lower cost.  If manganese is present in the feed water, filter sand can develop a layer of manganese dioxide over time and operate as a catalyst like manganese dioxide coated and manganese ore media. 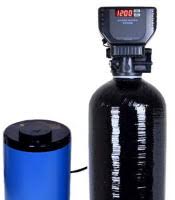 Manganese dioxide coatings act as a catalyst for the oxidation and reduction of iron and manganese.

Coated filter media such as manganese greensand typically contain 1% - 10% manganese oxide in a coating over a mineral substrate such as silica or dolomite.

To provide the oxidizing power to precipitate iron and manganese, greensand iron filters are automatically cleaned and regenerated with potassium permanganate during each backwash cycle. This is known as ‘intermittent regeneration’.
More commonly ‘continuous regeneration’ is used.  This involves injecting chlorine, and sometimes potassium permanganate, ahead of the filter to regenerate the filter media continuously: 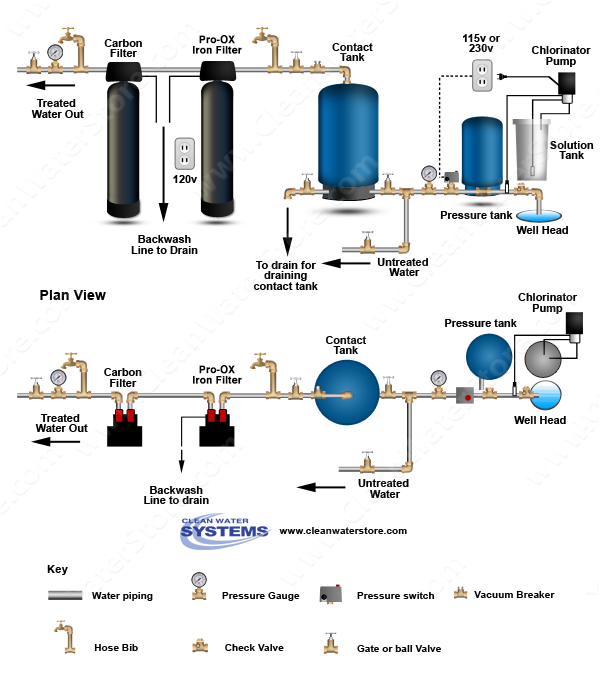 In some applications where the water has hydrogen sulfide “rotten egg” odor in it, and/or iron bacteria, pre-chlorination or ozone gas injection also aids in oxidizing the hydrogen sulfide and disinfecting the water.   Ozone has the added benefit of not increasing the formation of THM’s if organic matter is present as is the case with chlorine.
High Purity Manganese Dioxide Solid Core Iron Filter Media 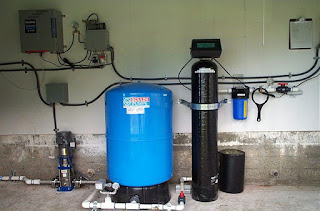 Unlike manganese greensand which is coated with a manganese oxide coating, manganese dioxide iron filters use a natural mined solid manganese oxide ore in a relatively pure form.
Most manganese ore is often found in lower concentrations of less than 50% manganese and is widely used to in the manufacture of batteries and many other important industrial uses.

In a few areas in the world, there are mines that contain manganese with a very high concentration of manganese oxide with highly active nsutite and pyrolusite structures.   This mineral is selected and carefully graded especially for water treatment.
Manganese dioxide solid core iron filter media such as NSF certified Pro-OX media, utilize an oxidation-reduction reaction and filtration process like greensand, but at a much higher level of performance.  This type of filter media contains greater than 85% manganese dioxide.
Because of the higher performance, faster throughput can be realized, and higher flow rates with smaller filter vessels can be used.  Depending on pH and other water chemistry factors a contact retention tank may not be required and injection of oxidants can be accomplished directly upstream of the filter media.
The performance of this type of media is directly related to the purity of the manganese dioxide ore, the porosity of the granules, and the level of highly active sites on the mineral structure.  The higher the purity and the more porous the media is, along with strict particle sizing (high uniform coefficient) can have a tremendous effect on how well this type of manganese dioxide media performs. 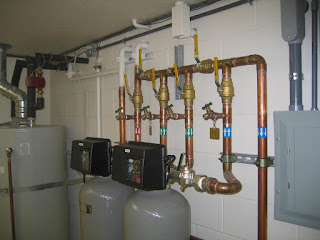 These filters can use either Intermittent or Continuous Regeneration.
In many applications where the ORP can be raised above 200 millivolts with aeration alone, no chemical regeneration is required.   An aeration treatment plant will include air injection under pressure where the water flows through a tank containing dissolved air.  This increases the dissolved oxygen in the water and raises the ORP so the manganese dioxide media can be regenerated with simple backwashing and rinsing.
This type of solid manganese dioxide is very long lasting and easily lasts 10 to 15 years.

This post first appeared on Clean Well Water Report, please read the originial post: here
People also like
Darmowe widgety
Creating and Selling Digital Products
Pineapple juice benefits for skin
How To Invest in Real Estate With no Money in 2023

What is The Difference Between the 3 Main Types of Iron Filter Media?