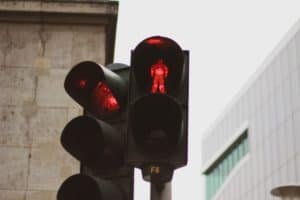 A 52-year-old woman was killed while using a crosswalk in the Auburn Gresham neighborhood of Chicago, Illinois. Police said she was struck by a car that ran a red light.

A 23-year-old man was driving a Chevrolet Impala westbound on 81st Street. As the vehicle entered the intersection, a Chrysler 300 traveling northbound on Racine Avenue ran the red light. The Chrysler spun out and hit the pedestrian in the crosswalk.

The vehicle then crashed into the building of a nearby restaurant. The collision resulted in a gas leak that prevented bystanders from helping the injured woman. The owner of a liquor store next door said he called 911 and evacuated his workers and customers.

The woman was transported to the University of Chicago Hospital, where she was pronounced dead. The Chevy contained an infant who sustained serious injuries in the collision while the 26-year-old driver broke his arm. Witnesses said he used the sunroof to get himself and the baby out of the vehicle. Both were hospitalized.

Police said the Chrysler driver was uninjured. He initially drove off from the scene but was later tracked down. Citations were pending while authorities continued to investigate the case.

Given the size and weight of vehicles, they have the potential to cause serious injuries when striking a pedestrian. The injuries that result from an impact can even be fatal, as in this case.

While Briskman Briskman & Greenberg was not involved with this pedestrian accident, we have decades of experience representing clients in personal injury claims. If you were injured in a pedestrian accident or a motor vehicle collision, our Chicago personal injury lawyers are here to help you pursue compensation for your medical expenses, lost wages and other costs. Contact us today for a free initial consultation.