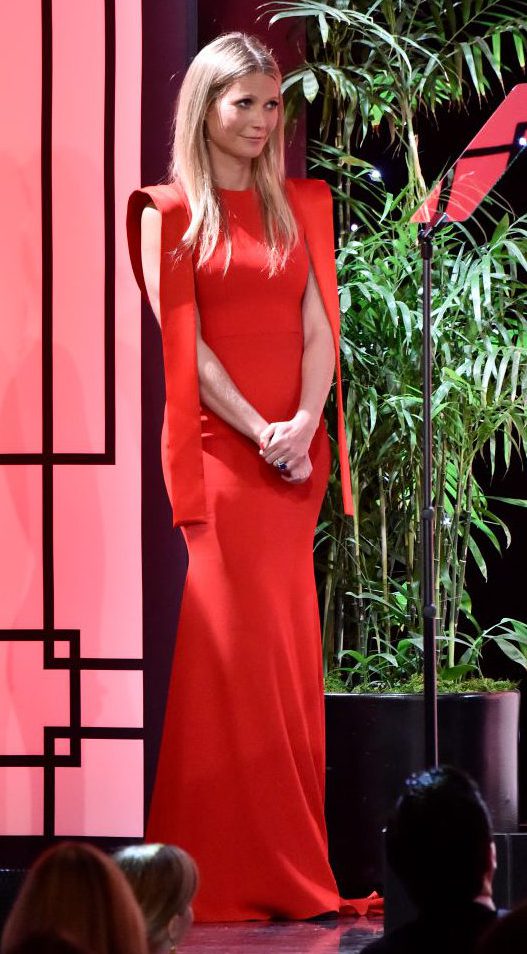 The 45 year-old actress officially stepped out as a bride-to-be for the very first time this past weekend on Saturday at the Producers Guild Awards in Los Angeles. Paltrow was presenting Ryan Murphy with the Norman Lear Achievement Award in TV when she debuted the massive and gorgeous blue Sapphire Engagement Ring from her fiance, Brad Falchuk.

Falchuk and Murphy have frequently collaborated on television series like American Horror Story, Glee and 9-1-1. Paltrow’s unique engagement ring wasn’t the only thing contributing to her stand out appearance Saturday. 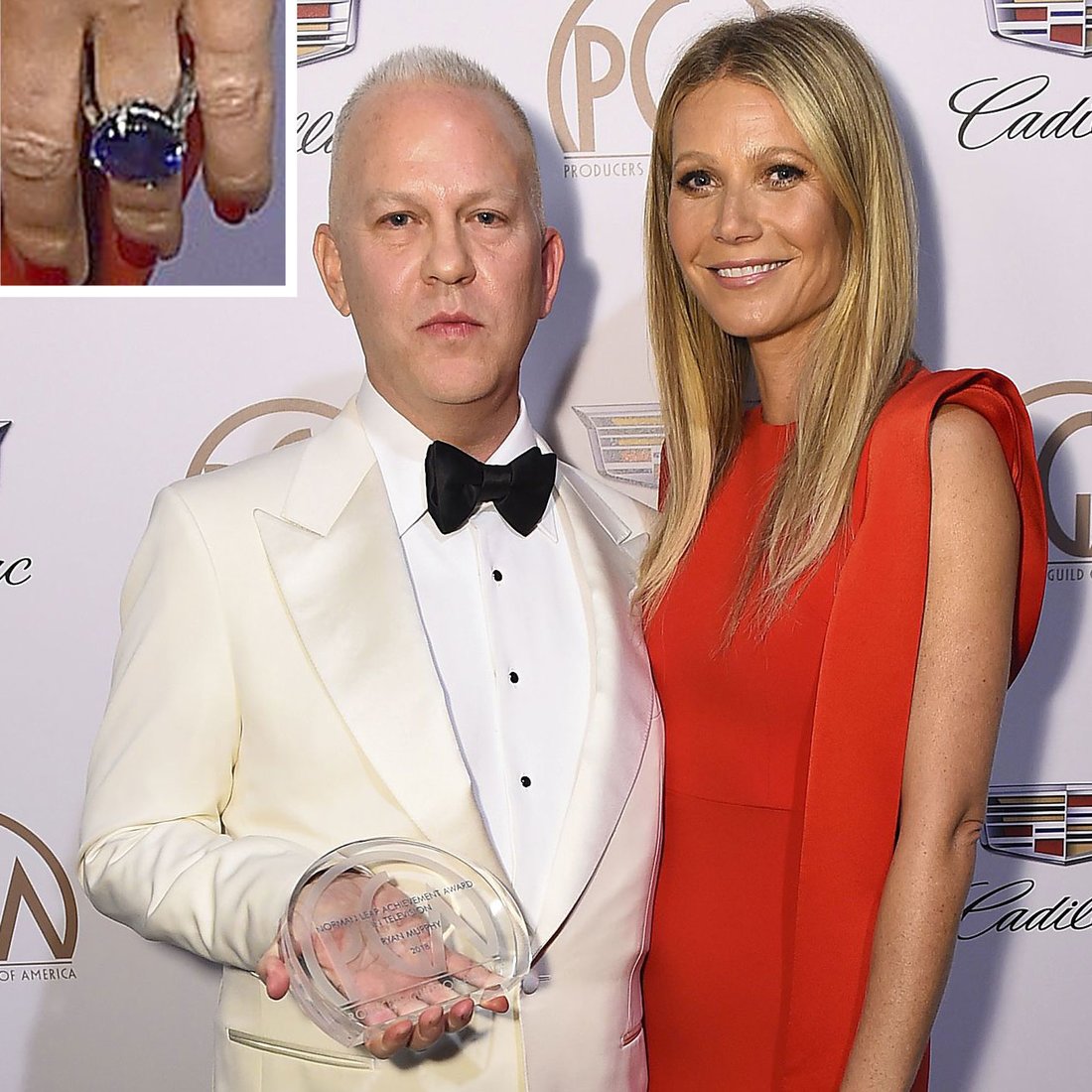 Gwyneth Paltrow was in attendance at the PGAs to honor Ryan Murphy with the Norman Lear Achievement Award in TV. (Photo Credit: People.com)

Wearing a red Alex Perry dress, she was eye-catching in her Christian Louboutin shoes that coordinated wonderfully with the glimmer and shine from the large stone of her new engagement ring.

In the first pictures released by Paltrow of her ring, the center stone looked almost black to the eye, but when you take a closer look, it is in fact a deep, dark, vivid blue sapphire hue.

A gorgeous piece, made even more beautiful by the wearer, there is much that we can already tell about this stunner, including the estimated value of this Blue Sapphire Engagement ring.

Size: It is likely that the sapphire gemstone is around 12 ct with beautiful facets and an overall even proportion.

Origin: Ceylon or Burmese origin and definitely untreated in color. To learn more about color treatments of sapphires, visit us here where we cover the topic and what you need to know.

Shape: The shape is either round or cushion, and both serve as the most impressive shapes to achieve maximum color and light reflection.

Setting: This ring is all about the sapphire appearing in a simple solitaire setting, highlighting the exceptional stone as the sole focus of the ring. 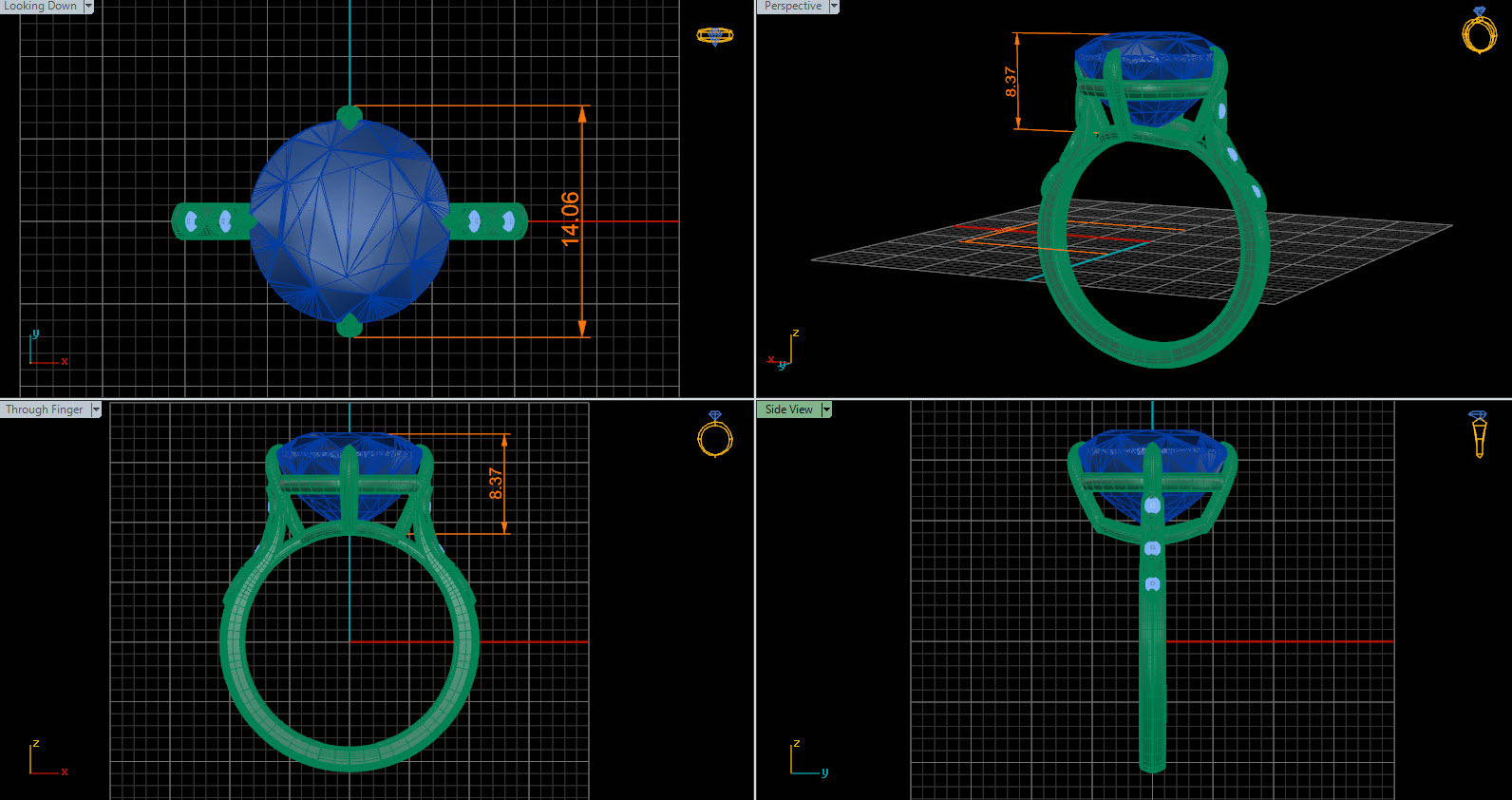 Take a look at similarly gorgeous sapphire engagement rings that grace the hands of your favorite celebrities. 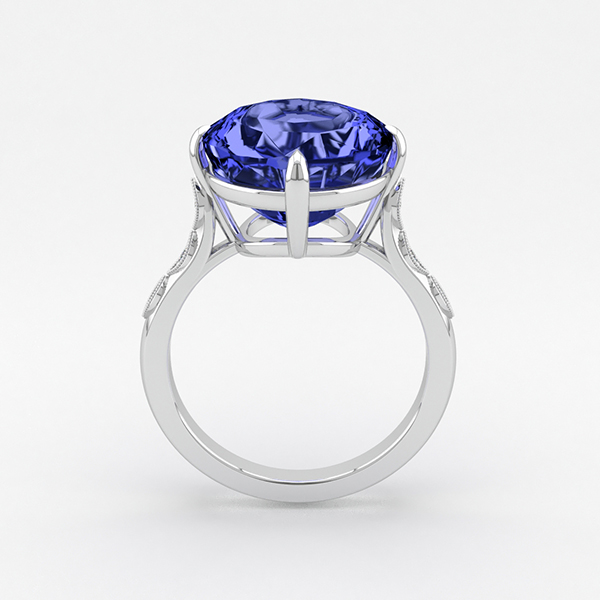 The first in a series of four designer’s renderings of the blue sapphire engagement ring debuted by Gwyneth Paltrow.

The solitaire setting is a classic style that is meant to showcase a single center stone of superb quality. The most recognizable form features a plain precious metal band that supports a prong-set center stone for maximum presence and reflection of light.

Due to the lack of other major stones or intricate detailing, all solitaire settings by their nature call for an extreme quality for the center stone – something easily apparent about Ms. Paltrow’s ring. 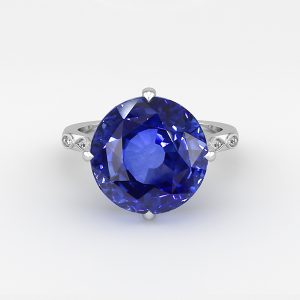 It is likely that the metal used for the ring is platinum, a most popular choice as it provides a strength, durability, and beauty highly prized for use in jewelry. It is the ultimate metal that symbolizes luxury and quality.

For its use with Ms. Paltrow’s ring, it provides a cooling element to the blue of the sapphire gemstone, adding to the depth and intensity of the stone’s hue. Small diamonds travel halfway down the shank adding to the shine and luster. 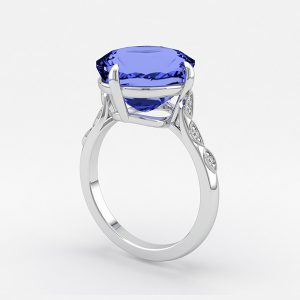 This ring serves as a statement for the huge trend toward modern engagement rings that feature precious gemstones in the starring role, specifically sapphires. Google trends show an immense interest in sapphire engagement rings building strongly over the last few months, making 2018 the year for the sapphire to reign! 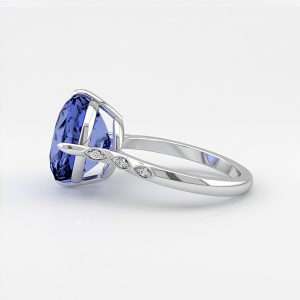 Sapphire engagement rings have a long and illustrious history outside of the United States where the sapphire gemstone is highly revered, and have only recently in the past few years been garnering more and more interest stateside for their beauty, individuality, and unique appeal.

With this choice, Gwyneth Paltrow is offering a visual representation of the strength and confidence she has worked towards and spoken about in the last few years as part of her personal transformation. Choosing a sapphire engagement ring is a statement of independence and confidence in forging one’s own unique style story outside of the norm, something Gwyneth Paltrow is well-known for achieving.

Earlier this month, Paltrow and Falchuk made their engagement official by announcing the happy news through a joint appearance on the cover of Goop Magazine’s ” Sex & Love” issue. The couple began dating over three years ago, in 2014, but had initially met when Paltrow made a guest appearance on Glee back in 2010.

A close-up of the stunning solitaire blue sapphire engagement ring.

It’s truly a love story that will cause almost anyone to swoon. Paltrow has spoken about accepting she has reached midlife, and that the romantic department can be quite complex during this stage. So why did she decide to officially become Mrs. Falchuk? Because she truly believes she has met the one she was meant to be with.

After a rollercoaster marriage to Coldplay’s Chris Martin for over 11 years, Paltrow knows that things have worked out just as they were meant to be.  Her previous marriage came to an end when the couple split in 2014. Falchuk had previously split from his television-producer wife Suzanne Bukinik in 2013. 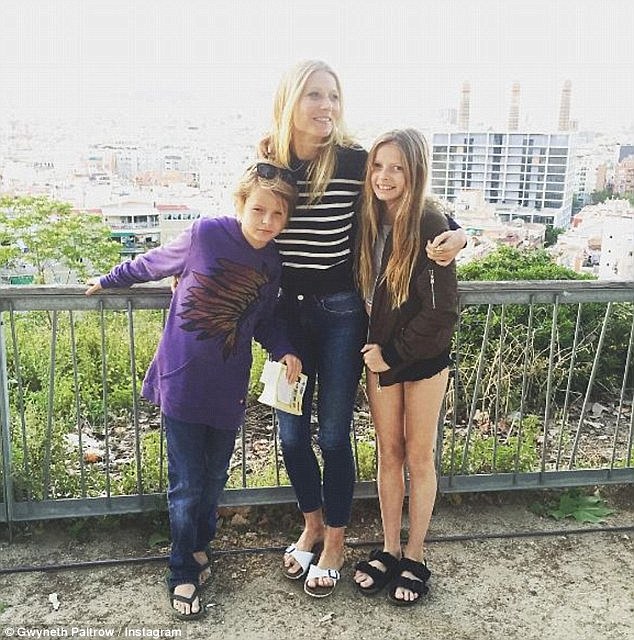 Gwyneth Paltrow with her children Apples and Moses.

Taking the leap to get married after going through a divorce can be scary and confusing. But Paltrow has been quoted to say “I have decided to give it a go again. Not because I have found the man I’m meant to be with, but because I have accepted the soul-stretching, pattern-breaking opportunities that terrifyingly are made possible by intimacy.” This statement helps to give hope to those going through the same life cycle as Paltrow and Falchuk.

The pair first went public with their romance when they attended Robert Downey Jr’s birthday party in 2015.

The mother of two opened up about making changes in her life after she turned 40 years old, telling The Mirror that, “for me there were changes I had to make to be my true self and live my life with happiness. You just have to be brave and make the choice to go for it, to accept yourself and love yourself. Forgive yourself for any missteps you make. It was a long interesting road to get to where I am now, but I know I like myself. I wish I could teach young girls how to do this when they are 16 years old instead of 40.”

All elements combine to create a truly special and stunning piece of jewelry to be treasured for decades to come. Congratulations on your engagement Gwyneth Paltrow and Brad Falchuk!

Return to Top of Page