As such an enormous part of our daily communication it’s no surprise that these emoticons and emojis have found their way into the courts quite a few times–requiring courts to figure out exactly what they mean in each context.

Emojis have made their presence felt in the legal system for years now. However, the number of U.S. cases dealing with them have skyrocketed in the last few years. 2016 saw 30% of the total cases dealing with emojis in the history of the U.S. If you combine this with 2017, the last two years have included nearly have of all the cases dealing emojis since they first appeared.

These little images have had an impact on cases ranging from criminal threats to landlord tenant law to contract situations. So how exactly do the courts deal with them? What impact do they have on law such as intellectual property or workplace sexual harassment?

It’s a larger topic than you may imagine, so much so that even a cursory glance is going to need two articles to break down. In today’s article we’ll be looking at how the courts look at and parse emojis and emoticons. Later this week, we’ll switch gears and look at some of the most common legal questions that come up in the context of emojis–how they’re treated for sexual harassment and intellectual property purposes. 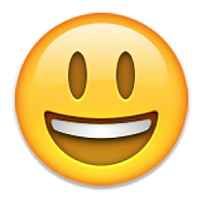 What are Emojis and Emoticons?

First and foremost, it’s worth defining our terms. At this point, pretty much everybody knows what an emoji is and list off a laundry list of examples–emoticons have existed since around 1982. However, there is an important distinction between emoticons and emojis.

Emoticons are a combination of existing symbols to form an image. They can be as simple as a smiley face such as this :). They can be as complicated as the popular table flipping emoticon– /(╯°□°）╯︵ .

However, the important point on which they differ in definition from an emoji is that while an emoticon is made of symbols existing on your keyboard an emoji is an independent image such as a frowning face, a dog, a car, etc. Emojis are much more recent than emoticons. However, at this point it is likely that emojis see more use by the public.

It’s also worth noting that some emojis and emoticons are near universal, while others are proprietary to specific platforms or have variations from platform to platform. Regardless, both are so pervasive in modern communication that courts have been addressing and interpreting them for years.

Emojis in the Courts

Interpreting non-written language–physical gestures for example–is nothing new to the courts. They’ve been doing it for many years, emojis and emoticons are in many ways just another form of this. Many courts have been well equipped to deal with these issues. There are many examples of them doing just that.

In 2011, a Texas man put forth a particularly distasteful argument in his criminal violent sexual assault case that the defendant had consented to sex via a winking face in an otherwise non-sexual text. Thankfully, the court was not buying it and the man was found guilty after they ruled that you could not read that much into a winking smiley face in a text.

The year 2015 saw quite a few notable emoticon cases. A case dealing with the online black markets of the Silk Road ruled that the original emoticons in all communications related to the case should be preserved as they had the potential to change the meaning of statements–even make them mean the opposite of the text.

The Supreme Court even heard a case dealing with emojis. They overturned the conviction of a Pennsylvania man for criminal threats against his ex-wife on Facebook. The threats in question included quotes of threatening rap lyrics and redone scripts from a sketch comedy show to change the context to threatening a wife. The man relied partially on an argument that his threats shouldn’t be taken seriously since they ended in a

The same year saw courts throw out allegations against a New York teenager after he was arrested by police on charges of terrorist threats for posting on social media “run up on me, he gunna get blown down” followed by a police officer emoji and three gun emojis. The court felt these emojis were insufficient to establish that he was making an imminent threat of violence against the police.

More recently, a Michigan court ruled on emojis and emoticons. The court looked at the “:P” emoticon in a defamation case, ruling that the emoticon meant that the statement proceeding it was meant as a light hearted and sarcastic statement as opposed to a defamatory statement to be taken as a serious attack on character.

The court looked to an Israeli court ruling as part of reaching its decision. In the Israeli case, the court ruled on a text reading “Good morning —

— we want the house ” followed by emojis–in order–of a flamenco dancer, two dancing girls, a peace sign, a comet, a squirrel, and a champagne bottle, then more text reading “just need to go over the details…When suits you?”

The court decided that the celebratory tone of the text, along with its content, reasonably led the landlord to believe the person texting was making an offer on the house–although they didn’t act as a binding contract. The consistency in the type of emojis used apparently convinced the courts of their reasonable interpretation.

The…text message sent by defendant…included a smiley, a bottle of champagne, dancing figures and more,” he wrote. “These icons convey great optimism. Although this message did not constitute a binding contract between the parties, this message naturally led to the plaintiff’s great reliance on the defendants’ desire to rent his apartment…These symbols, which convey to the other side that everything is in order, were misleading.”

As you can, see courts can and have interpreted emojis as part of their rulings. The above examples are just a few situations of many more where courts have dealt with this problem. However, this doesn’t mean that this interpretation doesn’t raise issues unique to emojis and emoticons.

There an enormous number of emojis and emoticons out there now–a number that is growing every day. There is very little out there in terms of official definitions for these emojis. Websites exist however they have varying levels of success or accuracy when it comes to rounding up every emoji or even properly defining them.

Emojis frequently take on a meaning different from their intended meanings. The folded hands emoji was originally meant to symbolize please or thank you but is much more frequently used as a symbol for praying or a high five.

The skull emoji is very rarely used to symbolize actual death, more frequently used as embarrassment or something else. There’s also very little history here for more recent emojis that courts can look at to define their meaning–the usual approach courts take in defining something like a gesture.

When emojis are strung together, it can change their meaning entirely–making interpretation a more case by case issue. They can also mean a totally different thing from one group to another. For instance, in Japan the bank emoji with the letters “BK” embedded in it is not associated with banks at all but is rather used to represent the slang term “bakkureru” which means hiding from your responsibilities.

This is just one example and you need not travel to a different country to see emojis change meanings, emoji meaning can vary by platform or even friend group. This can easily lead to miscommunications leading to perceived contracts (an email chain can easily make a contract in the right circumstances) or even criminal threats as we’ve seen in the above cases.

How this will impact a case will vary based on the law in question and the facts–usually making it an evidentiary issue. Some sections of law, such as contracts, have established means of handling such misunderstandings among the parties themselves–regulating what happens when one party misinterprets the other party’s meaning.

However, it will still by and large be a case by case issue. It is an issue that is pervasive to nearly every area of law as an evidentiary issue and becomes even more complicated when emojis meet intellectual property law such as copyright or trademark. However, that’s an issue for later this week. Check back later and we’ll go from understanding the basics of “emoji law” to where the rubber hits the road–how they’re treated on specific legal issues.