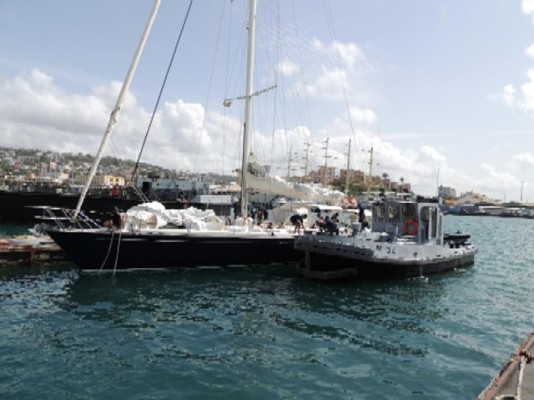 French customs officers have seized more than two and a half tons of cocaine off the French Caribbean island of Martinique in two separate anti-drug operations last week.

In the first operation, which was carried out Wednesday night, officials seized approximately 2.5 tons of drugs with an estimated street value of 318 million Euros from a sailboat off the island's coast. The effort brought a two-year-long international investigation to a close. If cut and sold in the UK the haul would have had a likely potential street value in excess of £300 million.

The second, smaller-scale drug bust took place on Friday, when customs officers found a further 485 pounds of cocaine on board a Guyanese tugboat, in a joint operation carried out by France and the Joint Interagency Task Force South, a US agency specialising in multinational operations against drug trafficking.

Speaking on France 2 Sunday, a spokesman for France's National Directorate of Intelligence and Customs Investigations  said the bust made on stormy seas was "the biggest cocaine seizure in the entire 200-year history of French customs" and "one of France's 10 largest cocaine seizures
anywhere in the world."

According to the DNRED, the yacht named the Silandra was allegedly headed to Europe when customs officers stopped the 20-meter vessel around 9pm Wednesday night.

Officers allegedly found the cocaine packed in 80 packages that were littered on the cabin floor, according to French television France 2. The vessel — which was falsely sailing under a US flag — was purchased for 500,000 euros ($536,000) by a Spanish national who was a known member of Basque separatist group ETA in the '80s, French daily Le Parisien reported.

On April 13, the Silandra reportedly stopped in Saint Lucia, an island south of Martinique, where traffickers on board loaded the drugs onto the vessel. Two days later, on Wednesday April 15, the sailboat set off on its transatlantic journey, only to be stopped that night, 125 miles off the coast of Martinique.

Three people — including one Venezuelan and two Spanish nationals — were arrested in the operation. One of the Spaniards is an ex-member of ETA and the other is a known drug trafficker, according to French radio Europe 1. It is unclear in reports whether either of the Spanish traffickers arrested is the same Spanish national who purchased the boat. The identity of the Venezuelan is unknown.

In the second operation Friday, the Guyanese tugboat was intercepted some 400 miles to the east of the Caribbean islands, according to local news channel France 1, and its four occupants were taken into police custody.

France has already retrieved nearly 4 tons of illegal seaborne drugs since the beginning of 2015. Last year, the country's global anti-narcotics operations hauled in 7.2 tons of cocaine. In November 2014 a UK-bound yacht carrying an estimated 250 kilos of cocaine was seized off Martinique, in another joint operation. Two men from Jersey were later jailed for a total of 17 years.

Other French agencies have also been involved in drug operations throughout the years, with some seizures larger than the recent "historic" bust carried out by Customs. In November 2006, the French Navy seized 4.7 tons of cocaine stashed aboard a Panamanian freighter off the coast of Martinique.