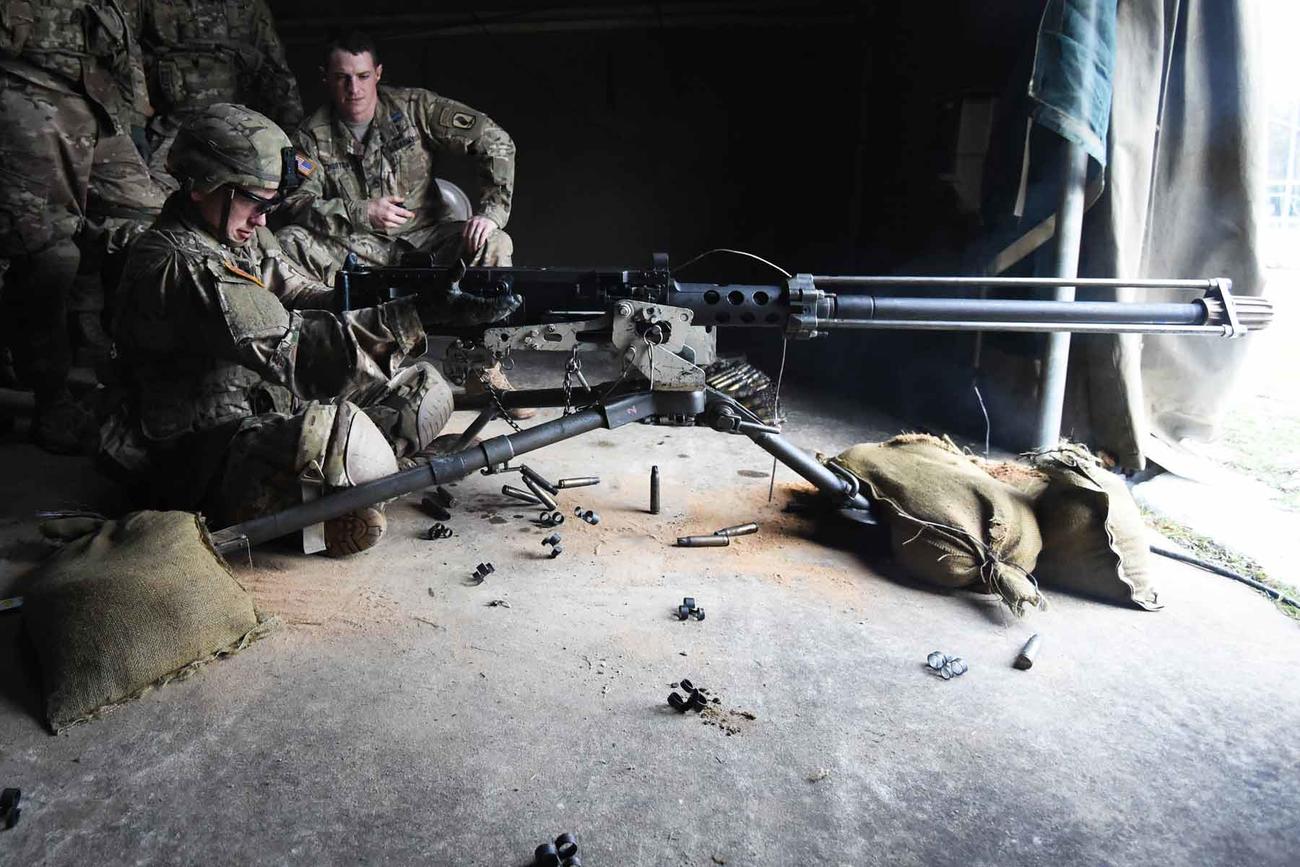 An Army base in Washington state spent part of the long holiday weekend searching for a Missing part to a .50-Caliber Machine Gun, the latest incident after the service was criticized for lost weapons.

Soldiers with Joint Base Lewis-McChord‘s 1-2 Stryker Brigade Combat Team, or “Ghost” Brigade, had their four-day weekend cut short on Friday for what soldiers lamented as a classic Army debacle involving the missing piece of equipment, a firestorm of rumors and what one soldier described as an out-of-season “Easter egg hunt.”

The receiver assembly of an M2 .50-caliber machine gun went missing from 2nd Battalion, 3rd Infantry Regiment’s Staff Duty area and triggered an all-hands search that, for most of the rank and file, lasted a little over 12 hours. But it resulted in an Army investigation that was still ongoing Monday.

Read Next: Senior Leaders Should Stay Out of ‘Culture Wars’ on Social Media, Army Secretary Says

The receiver assembly is essentially useless on its own but had not been found, according to 7th Infantry Division spokesperson Maj. Bryen Freigo. A judge advocate’s recommendation for a search of the base indicated the weapon component had likely been stolen.

The Department of Defense, specifically the Army, has come under criticism over its firearm safekeeping over the last year following reporting by The Associated Press exposing a decade-long effort to downplay the number of lost or stolen firearms from units across the country.

For 2-3 Infantry, along with sister battalions in 1-2 SBCT, the scare started as soldiers were gearing up for the unit’s upcoming Expert Infantry and Expert Soldier Badge qualifications, two Army special skills badges. Operation of an M2 .50-caliber machine gun is part of the qualification.

According to Freigo, the plan was to leave the gun with staff duty — a 24-hour posting that typically includes one noncommissioned officer, two soldiers and one officer meant to field emergencies or reports after duty hours — in the event that off-duty troops wanted to practice operating the weapon during the four-day weekend.

“In preparation for testing, an M2 had been signed over to staff duty to allow soldiers to train for testing through the weekend,” Freigo told Military.com over email.

A soldier allegedly took the receiver, which was out of the sight of the staff duty troops. This “created an opportunity for one awful person to create chaos,” one soldier involved in the search told Military.com. It is unclear why or exactly when the soldier took the component.

Freigo said that staff duty discovered the component was missing and notified their chain of command. “Per policy, the brigade had been recalled to aid in the search for the sensitive item,” he added.

In official statements, the Army did not say that the weapon was stolen, but the day it went missing, the brigade judge advocate recommended a probable cause search in a memo to 1-2 SBCT commander Col. Kwenton Kuhlman that was posted online and verified by Military.com.

“Based on the sworn statements positively identifying a servicemember attempting to carry a .50-cal weapon system into the barracks and the fact that we have information that the weapon system has since moved around the footprint to circumvent discovery, you have probable cause to search the entire host footprint for the .50-cal weapon system that went missing from 2-3 IN’s Staff Duty Desk this morning, to include offices, barracks, motor pools, parking lots, and vehicles parked in those parking lots,” the memo said.

A search for the receiver ensued, and soldiers from 2-3 Infantry were called in to look for it. Later in the day, when it still hadn’t been found, the rest of “Ghost” Brigade was recalled to look too.

A culprit was identified that afternoon, according to a soldier involved in the search. By evening, the soldier had allegedly confessed to tossing the receiver into a dumpster. At some point, the trash bin had been emptied and its contents — including the machine gun part — had been hauled away.

“Everyone obviously looked in their own arms room [but] very early on there were indicators that the dumpsters were important,” the soldier told Military.com. “Whether they were full or whether they were empty, obviously it sucked. … That culminated in an hour.

“I mean, there’s only so many places you can f—ing look,” the soldier added.

While the search authorization memo said “.50-cal system,” Freigo confirmed to Military.com that it was just the receiver, a part of the weapon that houses the components that make it fire.

“Unit personnel were released later in the day after an extensive search of the brigade area was unsuccessful,” Freigo said. “The receiver has not been recovered as of Oct. 10, and an investigation remains ongoing.”

The chaos resulted in many soldiers taking to social media to feed and stoke the rumor mill. In the Army, when equipment gets lost, the response is typically to gather a group of soldiers to find the item that grows larger the longer the item remains missing.

The shared punishment often results in frustration among those ripped from other tasks — or in this case, a day off. But it also leads to what many service members call RUMINT, or rumor intelligence, about the event and alleged perpetrator.

One of the first instances of online scuttlebutt was a Reddit post titled, “Who else lost their four-day weekend to a stolen 50?” From there, several soldiers tapped into social media to weigh in — some alleging to know the rank and the state of mind of the alleged perpetrator, as well as what staff duty was doing when the component went missing.

Military.com cannot independently confirm these rumors, and the spokesperson for 7th ID, Freigo, did not comment on them, presumably because the investigation is ongoing.

The M2 is a belt-fed heavy machine gun that fires a .50-caliber round. The system can be used for both dismounted and mounted operations. For an organization like 1-2 SBCT, it is one of the primary methods of direct contact at the line level.

“A .50 cal is nuts to go missing,” the soldier told Military.com, though it was only the receiver. “The searching was silly. … The guidance was to go walk around and look for it like you’re doing an Easter egg hunt.

“And then the part that was frustrating for everybody was once it was confirmed that there was somebody in custody,” he added. “There was a long time between when that allegedly happened and when people were allowed to go home.”

While details are still coming to light, what many might see as a frustrating and fruitless saga at the unit level tapped into an organization-wide issue of weapon accountability.

The AP, in its reporting last year, found the Army had by far the highest number of weapons go missing from arms rooms across the force in the 2010s.

Could a missing receiver from JBLM end up on the street in a crime? Chances are slim, but the AP investigation revealed that the circumstances in which weapons go missing can vary and, at the very least, the systems that account for them can be deeply flawed.

Experience Unforgettable Pleasure: Di…
Common Problems with Slit Lamp and Re…
What You Need to Know About Sydney Ep…
What is enzyme immunoassay
11 Ways Real Estate Market Will Chang…

This post first appeared on Gate News, please read the originial post: here
People also like
Experience Unforgettable Pleasure: Discover the Sex-Positive Resorts of Summer!
Common Problems with Slit Lamp and Repair Needs
What You Need to Know About Sydney Epoxy Flooring
What is enzyme immunoassay
11 Ways Real Estate Market Will Change in Nigeria in 2023
This Is What You Should Do If You’re Laid Off
10 Simple Tips for a Healthy Diet and Fitness Routine
React JS, Node JS & Angular JS: Which One is The Best For Web Development?
Build Passive Income and Create Generational Wealth
Transforming Business
Robotime ROKR Robot Steampunk Music Box 3D Wooden Puzzle Assembled Model Building Kit Toys For Children Birthday Gift