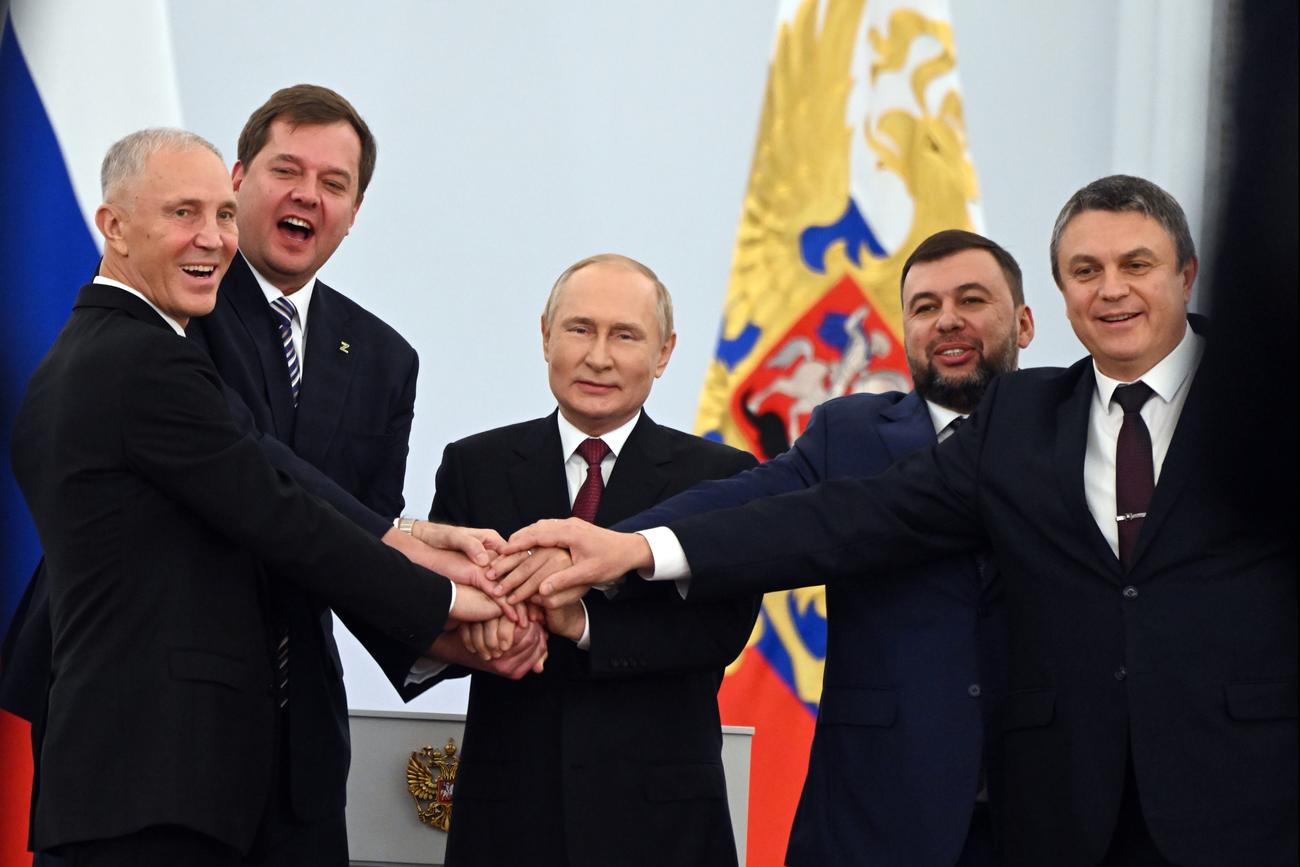 Even as the Kremlin moved to absorb parts of Ukraine in a sharp escalation of the conflict, the Russian military suffered new defeats that highlighted its deep problems on the battlefield and opened rifts at the top of the Russian government.

The setbacks have badly dented the image of a powerful Russian military and added to the tensions surrounding an ill-planned mobilization. They have also fueled fighting among Kremlin insiders and left Russian President Vladimir Putin increasingly cornered.

Here is a look at the latest Russian losses, some of the reasons behind them and the potential consequences.

String of defeats in the northeast, south

Relying on Western-supplied weapons, Ukraine has followed up on last month’s gains in the northeastern Kharkiv region by pressing deeper into occupied areas and forcing Russian troops to withdraw from the city of Lyman, a key logistical hub.

The Ukrainian army has also unleashed a broad counteroffensive in the south, capturing a string of villages on the western bank of the Dnieper River and advancing toward the city of Kherson.

The Ukrainian gains in the Kherson region followed relentless strikes on the two main crossings over the Dnieper that made them unusable and forced Russian troops on the western bank of the Dnieper to rely exclusively on pontoon crossings, which also have been repeatedly hit by the Ukrainians.

Phillips P. O’Brien, professor of strategic studies at the University of St Andrews, predicted more Russian failures in Kherson, noting that it’s “hard to stabilize a line when your logistics are stretched, your troops are exhausted and your opponent is much, much smarter.”

Pressed against the wide river and suffering severe supply shortages, Russian troops face a looming defeat that could set the stage for a potential Ukrainian push to reclaim control of the Crimean Peninsula, which Moscow annexed in 2014.

Military reporters and bloggers embedded with Russian troops in Ukraine have painted a bleak picture of an ill-equipped and poorly organized force under incompetent command.

With the war in its eighth month, the Russian military suffers from an acute shortage of personnel, lack of coordination between units and unstable supply lines.

Unlike the Ukrainian military, which has relied on intelligence data provided by the U.S. and its NATO allies to select and strike targets, the Russian army has been plagued by poor intelligence.

When Russian intelligence spots a Ukrainian target, the military engages in a long process of securing clearance to strike it, which often drags on until the target disappears.

Russian war correspondents particularly bemoaned the shortage of drones and noted that Iranian-supplied drones have not been used for maximum effectiveness due to the poor selection of targets.

Russian President Vladimir Putin responded to the Ukrainian counteroffensive by ordering a partial military mobilization, which aims to round up at least 300,000 reservists to beef up forces along the 1,000-kilometer front line in Ukraine.

At the start of the invasion, Ukraine declared a sweeping mobilization, with a goal of forming a 1 million-member military. Russia until that moment had tried to win the war with a shrinking contingent of volunteer soldiers. The U.S. put the initial invading force at up to 200,000, and some Western estimates put Russian casualties as high as 80,000 dead, wounded and captured.

While the hawkish circles in Moscow welcomed the mobilization as long overdue, hundreds of thousands of Russian men fled abroad to avoid being recruited, and protests flared up across the country, raising new challenges to the Kremlin.

Fresh recruits posted images showing them being forced to sleep on the floor or even in the open air. Some reported being handed rusty weapons and told to buy medical kits and other basic supplies themselves. In a tacit recognition of supply problems, Putin dismissed a deputy defense minister in charge of military logistics.

The mobilization offers no quick fix for Russia’s military woes. It will take months for the new recruits to train and form battle-ready units.

Putin then upped the ante by abruptly annexing the occupied regions of Ukraine and voicing readiness to use “all means available” to protect them, a blunt reference to Russia’s nuclear arsenal.

Rifts open up at the top

In an unprecedented sign of infighting in the higher echelons of the government, the Kremlin-backed regional leader of Chechnya, Ramzan Kadyrov, has scathingly criticized the top military brass, accusing them of incompetence and nepotism.

Kadyrov blamed Col. Gen. Alexander Lapin for failing to secure supplies and reinforcements for his troops that led to their retreat from Lyman. He declared that the general deserves to be stripped of his rank and sent to the front line as a private to “wash off his shame with his blood.”

Kadyrov also directly accused Russia’s top military officer, Gen. Valery Gerasimov, of covering up Lapin’s blunders — a pointed attack that fueled speculation that the Chechen leader might have forged an alliance with other hawkish members of the Russian elite against the top military leadership.

In a blunt statement, Kadyrov also urged the Kremlin to consider using low-yield nuclear weapons against Ukraine to reverse the course of the war, a call that appeared to reflect the growing popularity of the idea among the Kremlin hawks.

In a show of continuing support for Kadyrov, Putin promoted him to colonel general to mark his birthday, a move certain to anger the top brass. And while Kremlin spokesman Dmitry Peskov described Kadyrov’s statement as overly emotional, he strongly praised the Chechen leader’s role in the fighting and his troops’ valor.

In another sign of intensifying dissent at the top, Yevgeny Prigozhin, a millionaire businessman dubbed “Putin’s chef,” lashed out at the governor of St. Petersburg, charging that his failure to provide assistance for Prigozhin’s Wagner private security company amounts to supporting Ukraine.

Some other members of the Russian elite offered quick support for Kadyrov and Prigozhin, who have increasingly served as frontmen for the hawkish circles in Moscow.

Retired Lt. Gen. Andrei Gurulev, a senior member of the lower house of Russian parliament, strongly backed the Chechen leader, saying that the Russian defeat in Lyman was rooted in the top brass’ desire to report only good news to Putin.

“It’s a problem of total lies and positive reports from top to bottom,” he said.