Originally founded as New Amsterdam, the Financial District is originally known for being the driver of the financial development and size of the U.S. economy. Many have underestimated the growth and development of its resilience and transition into an up-and-coming neighborhood, shopping district, and touristic attraction.

Following events such as 9/11 and the Great Recession of 2008, the Financial District shifted to a popular hotspot for residential housing. Soon after 2008, hundreds of luxury high rises rose from the ashes of their commercial counterparts to create the various faces of the modern downtown Manhattan lifestyle. Hundreds flocked to these listings promising a dream of a fantastic skyline view over the East River with an amenity to cater to their every need.

You could walk and live in Fidi for a decade and still learn something new about the places you pass by every day. The cobblestone streets of Stone Street and South Street Seaport have centuries of rich, abundant history. These smaller towns have continued to prosper, becoming a hub for cuisines from all parts of the planet along with more historical restaurants such as Fraunces Tavern or the ‘Dead Rabbit’ where George Washington himself would order one of the best Shepard pies I’ve ever tasted. Along with great food, South Street Seaport has become a shopping district with plenty of local merchants.

The neighborhood also attracts a great amount of tourism in NYC. Thousands of visitors flock from all around the planet to catch a ferry to Lady Liberty or other local attractions, take photos with Wall Street’s ‘Charging Bull’, or visit the many museums and historical churches.

The most recent attraction is the 9/11 memorial grounds that have two 50-foot deep reflective fountains to honor the victims of 2001’s terrorist attack right next to our new beacon of hope, the Freedom Towers. Many tourists shop at Westfield or Brookfield mall, and the famous Century 21 department store known for its heavily discounted high fashion with merchandise from many major European designers such as Gucci, Balmain, and others.

The iconic Stock Exchange and Federal Reserve are nestled in the heart of Fidi. Fulton Center happens to also be the center for all major transportation with direct access to the Oculus, an architectural representation for a dove taking flight, and guiding natural light to the former site of the recent tragedy of the 9/11 attacks. The Fulton Center offers access to all Manhattan’s major train lines and the PATH to New Jersey making transportation pretty convenient. Ferry service on the east side makes getting to other boroughs such as Queens and Brooklyn make the trip much more pleasant for the same price as a Metrocard trip. 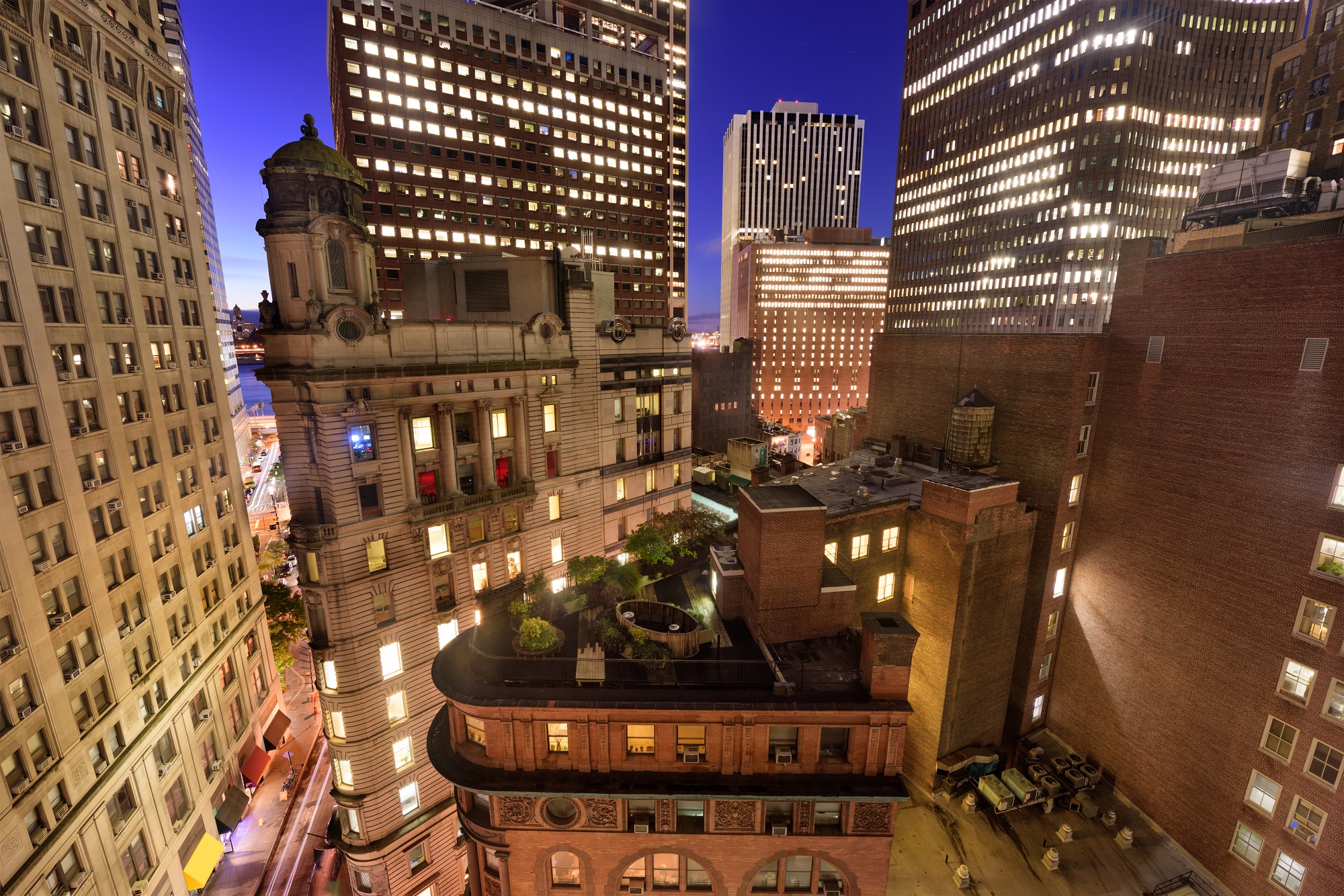 With all that being said, many new residents including myself take advantage of the east side dock filled with historical ships and walk through the miles of parks or the bike path up the west side. Battery Park in the evening is known as one of the most beautiful sunsets you could ever experience. The neighborhood is generous in dog parks, outdoor gyms, and fields to enjoy picnics and get-togethers with friends.

The financial district offers a home aside from the hustle and bustle of NYC. Although there’s plenty of fast-paced city noise, if you ever needed to get away there are so many calm and quiet places you could escape to. The area definitely feels more like a community than any other neighborhood I’ve ever experienced. I enjoy all the new friends and acquaintances from around the world I’ve met during my time living here whether it be on my roof deck or at a local cafe.

Hope you can come to enjoy it at some point too!