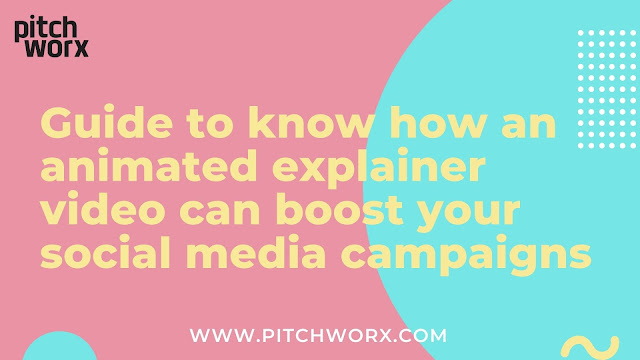 Animated Explainer videos are not only entertaining to watch but are visually impactful and informational. Because of their emotional and psychological appeal, they can be an effective way to communicate the right message to the audience. With the upscale of social media, it is easy to view and share the content which is why businesses are turning their efforts to video production. Know how an Animated Explainer video can boost your social media campaigns.
Cost-effective and engaging online content
An animated explainer video turns visuals into stories that are engaging and connects with the audience in the most cost-effective manner. Such videos use infographics and other elements to describe your complex product or service in a simpler way. With engaging visual metaphors and inventive ideas, you can create enticing experiences that engage the audience.
Mobile-friendly
With the advent of digital media and the use of OTT messaging/sharing applications on mobile devices, users tend to share more content socially. Today, with the latest technologies, smartphones have the capacity to display content in HD quality. And with more than 60% of video traffic on mobile devices and 40% of YouTube’s global watch time, the market trend for animated explainer videos is expected to rise even more.
Could go viral
If your animated explainer video is engaging enough it may even go viral and will generate mass advertising with thousands or even millions of views. Along with this, it is important to note that that there is no secret to making your video viral but with the fact that 50 % of comedy genre and 38% how-to-work videos are most likely to become viral. As animated explainer videos explain your product or services in an engaging manner, they could easily go viral and may potentially increase the marketing benefits for your business.
Useful on any marketing campaign
With a one-time investment in an animated explainer video company, you can boost your marketing campaigns with higher conversions and increased sales. This can be done via social media, emails, blogs, websites, paid advertisements, and more.

Subscribe to 5 Reasons Why Animation Is Compelling To Younger Viewers