Future of Work 2020: Digital systems can improve the quality of life in India, says Lalitesh Katragadda

Despite progress on many fronts, India lags in many vital aspects. About 250 million people sleep hungry every day and about 1 percent of them die every year, even though we produce more food than we require.

But Lalitesh Katragadda, Founder of Indihood and Avanti Finance and the man responsible for building Google Maps in India, believes that building the right digital systems can help break the feudal shackles that are holding us back.

At the third edition of YourStory’s Future of Work, India’s largest product-tech-design conference, he spoke about “Dismantling feudal structures for 1.35 billion”. 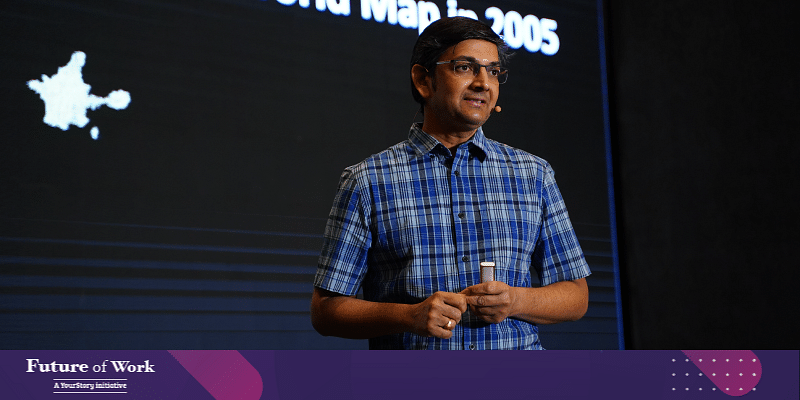 “It is possible to dismantle the structures that are holding us back as a country by building the right set of digital systems,” Lalitesh said.

He added that three principles of design could help build these systems – Agencies, Affordance, and Nativance, which go hand in hand to make simple, easy systems “for people to use in the most natural way”.

Google acquired his company, Sphereo, a robotics startup, in 2002, after which he headed Google Products. He created the Google Map Maker, which helped map about three billion people in 187 countries. After a fruitful association of 12 years, he stepped down in 2014.

Talking about his time at Google, he said Google Map Maker was met with negativity, but resulted in new, innovative developments.

Essentially, only about 15 percent of the population had access to maps. So, along with his colleague, Sanjay Jain, he “allowed people to do what they wanted to do and removed the barriers in their way”.

The project was launched in India in 2008, and the whole world was mapped by 2014. He gave the example of George Clooney who mapped disasters that he came across and make them known worldwide, which became “one of the key efforts in the development of this application”. He also spoke about a woman named Julia from Kenya, who mapped atrocities against women in the area.

“Mapping solved a very large problem, in a very simple way,” Lalitesh explained. “It threw light on a lot of Dark Knowledge, and made the system a lot more transparent. Essentially, Dark Knowledge can be used to weaponise facts, but this problem gets eliminated.”

Lalitesh then went on to discuss how this problem could be solved. He said a triangular feudal choke exists in our society where the money earned in the final stage does not reach the producers; many times, they are “unaware of the system and the worth of their products”.

However, if this system is digitalised in rural areas, farmers will be able regulate prices and get access to finance. They can get insurance for their commodities and create more useful products from their raw products. And in a few years, they can start building their own brands and sell these products on various ecommerce platforms.

He explained in simple terms, using the example of farmers, and revealed how digitalisation could help them earn a lot more.

Both Indihood and Avanti Finance work to solve these problems.

“Rural farmers make a lot more than urban farmers… I’ll let that sink in for a minute,” he said. “If you think that there is no money in rural India, believe me that there is… and there will be more in the future with the right use of digitalisation.”

Lalitesh said it would take “$10 trillion per year to offer all the services that the government of India has chosen to provide its people”. “That is, if we need great education, great healthcare, great governance and great financial systems with the best-in-class technology.”

He left the audience with a thought-provoking idea: “Until every woman, person, child, or dog is well fed, hunger is the solution. The same thing applies to the startup community in India. If you dismantle the feudal structure that exists, India will grow faster than any other country.”

Future of Work 2020: Digital systems can improve the quality of life in India, says Lalitesh Katragadda