For a long time, electric vehicles were synonymous with Tesla. Elon Musk's automotive and energy company has been an inspiration to many aspiring young entrepreneurs, including 23-year-old Guhan RP. The mechanical engineer in 2017 set up Coimbatore-based EV tech startup Gugu Energy, which aims to accelerate India’s shift to sustainable energy.

Guhan was introduced to the world of EVs when he saw a Tesla video online. “I was intrigued and felt that electric vehicles were inevitable in the future. That’s when we decided to build a Tesla-like car, and actually managed to build one within 12 months,” Guhan says.

However, Guhan soon realised that building even a small component for the car took the team no less than two to four months. He was about to give up when a friend offered a suggestion: why not try and build a two-wheeler version of Tesla? And that led to the birth of Gugu Energy.

The EV tech startup designs and manufactures smart electric vehicles, specifically two-wheelers that are affordable for the Indian masses.

“We did a market study on two-wheelers and found that five out of 10 people in India own a basic two-wheeler. India is the largest two-wheeler market in the world with annual sales of more than 25 million units, which is more than 10x that of annual car sales. We felt it was the right time to launch an Indian electric two-wheeler brand,” Guhan says. 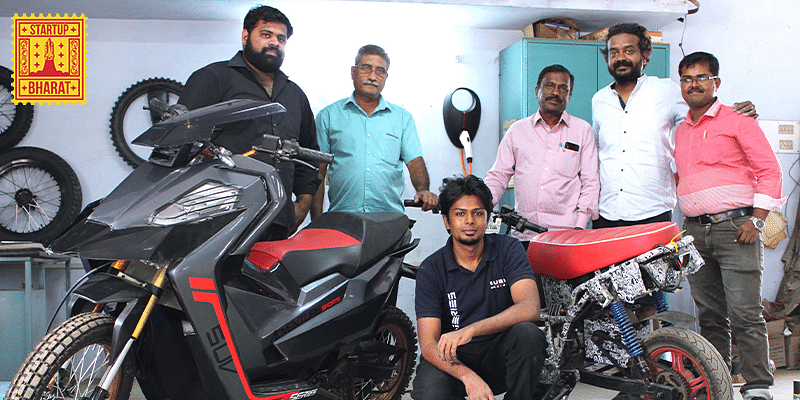 The Gugu Energy team designs and manufactures smart electric vehicles, specifically two-wheelers that are affordable for the Indian masses.

The founding team of this startup is an interesting mix of the young and the experienced: Guhan teamed up with Kannan A, a 55-year old industrialist and early-stage investor.

Guhan met Kannan through LinkedIn while he was researching a few angel investors who would be willing to bet on the future of electric vehicles in India.

“After interacting with him on LinkedIn, I realised that Kannan was from Coimbatore, too. He is an industrialist with over 25 years of experience in automotive engineering. He has a strong background in hardware prototyping,” Guhan says.

In 2017, when Guhan pitched the idea about the scope of EVs in India, Kannan joined him as a co-founder and even pumped in seed capital of $250,000. Soon after, Sundarson Paul, Founder and CEO of a Dubai-based private oil and gas corporation, invested $500,000 in the startup. In 2018, they also received $250,000 as additional financing. The total funding raised by the company was $700,000.

The Gugu Energy team at present comprises 14 full-time members, with a mix of IIT and IIM alumni. The team also includes a battery integration scientist from the US with 10-plus years of experience in the EV industry and battery cell system design. Some members of the management team previously held senior-level positions at Original Equipment Manufacturers (OEMs). 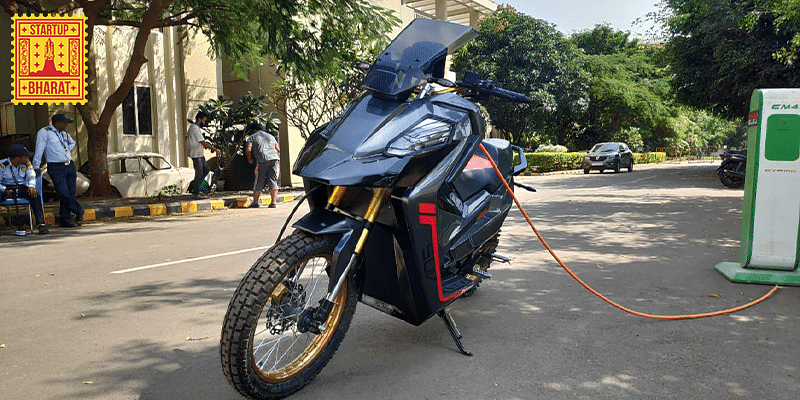 Prototype of a Gugu Energy bike

What are they building?

The team is currently building the R-SUV, a cross between a scooter and a motorcycle. Guhan says the Gugu R-SUV is a new breed of motorcycle that offers the longest range per charge with fast-charging facility.

From vehicle styling and USD forks to infotainment and battery pack technology, the R-SUV is designed at a studio at Pune and manufactured entirely at Gugu Energy’s R&D centre in Coimbatore.

The affordable variant of R-SUV will have a range of up to 130 km. Guhan adds it requires less than 30 minutes for the battery to charge from 0-80 percent at Gugu’s exclusive fast-charging stations.

The long-range variant will deliver up to 275-300 km on a single charge. It requires less than 45 minutes for the battery to charge from 0-80 percent. It has a top speed of 100kmph with single channel ABS as standard with acceleration of reaching 0-100 kmph under 6.5 seconds.

The R-SUV allows for additional cargo space and offers 28-litre storage capacity with a glove compartment. It has USB charging for a smartphone in the front, and also has a touchscreen system that integrates media, navigation, communications, and vehicle data into an intuitive interface via 4G internet.

Many functions are mirrored on the instrument panel. The touchscreen goes to a default UX mode after the bike hits more than 5 kmph speed to ensure the driver focuses on the road.

“In general, an EV has fewer moving parts than an internal combustion engine (ICE). The Gugu servicing comes with two subscription payment options: half-yearly or yearly. This allows customers to avail free charging at our fast-charging stations, door-to-door vehicle servicing, and data usage of 4G connectivity on vehicles,” Guhan says.

Before a customer takes delivery of their vehicle , Gugu will install and provide charging stations in the customer’s locality for hassle-free, free-of-cost charging in homes/apartments. 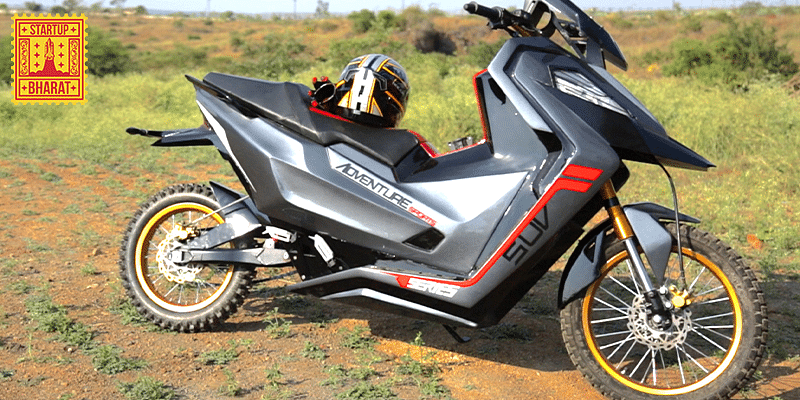 The Gugu Energy team is currently building the R-SUV, a cross between a scooter and a motorcycle.

[Startup Bharat] Ahmedabad-based startup Mybyk is wheeling in change with its bicycle-sharing s...

Guhan says they considered using battery swapping technology “initially, during the design phase”. “However, we realised that a customer will never pay a premium for a service that is at par with or 10 percent lesser than the current price of petrol,” he adds.

Battery swapping technology also comes with other issues such as heavy upfront costs, battery degradation within two to three years, and another layer of complexity to the entire charging grid.

“The reality is that people want to plug in where they work and live, and that aligns with where the needs of the grid are. We are currently at 1.75 km/minute in charging rate and in future we can have it at 3-4 km/minute, which will ease out the range anxiety problem. We see a future where a 150 km/charge vehicle will cost less than Rs 1 lakh,” Guhan says.

He says their semi-solid state battery is a Lithium Nickel Battery built by the in-house design team. “We have integrated a semi-solid electrolyte between the cathode and anode, which gives 10x high energy density at 260Wh/Kg that can be supercharged within 30 minutes from 0-80 percent of charging time as compared to current lithium battery tech, which uses a liquid electrolyte. It has a battery life of more than two lakh kilometres. It is also safer and cheaper to manufacture,” Guhan adds.

Guhan explains that they were also able to make the battery technology cheaper by eliminating cobalt content in the battery to less than five percent. Cobalt is the most expensive material in a battery cell.

Vrooming into the future

Electric vehicles are the talk of the town. Finance Minister Nirmala Sitharaman, in her maiden Budget speech, made several announcements to propel the manufacture and adoption of EVs in India.

However, Guhan isn’t worried about the competition and is optimistic about the future of Gugu Energy. He says they have received 9,200-plus pre-orders through the website. Their affordable R-SUV will be lesser than Rs 1.29 lakh before subsidy.

“The pricing of the long-range variant will be around Rs 3 lakh. FAME subsidy will range from Rs 23,000-Rs 39,000 per vehicle, depending on battery pack capacity,” he says.

The vehicles, which will hit the production line by late 2020, will have EMI options. The team intends to announce official pricing by early 2021, and is also building exclusive experience centres in association with dealership partners.

“We are currently focused on R&D to advance our battery technology and design. We will soon set up factories in Coimbatore/Bengaluru, which will have an initial production capacity of 15,000 units per year. We will gradually increase production capacity as needed,” Guhan says.

[Startup Bharat] Away from the metros, a new breed of deep-tech startups is solving ‘real India...

A Comparison of the Environmental Imp…
Things To Do In Copenhagen
Simple Tips To Increase Self-Esteem
Hey You, Finish 2019 Strong
Top Extracts Kratom Review