The tall palm trees that dot Kerala’s landscape are a rich source of tender coconut water, and Neera, a sap extracted from mature coconut palms trees. A source of essential nutrients and minerals, neera is also used for extracting palm sugar, syrup, honey, and jaggery. Tapped from the inflorescence of coconut trees, it transforms to coco sugar when it is evaporated to dryness, and turns to toddy (alcoholic drink) after it undergoes natural fermentation.

However, neera extraction - usually done before sunrise - is extremely laborious. Tappers have to climb up to 30 feet thrice every day for three months to extract neera from one sap.

"Growing up in Kochi, I understood the problem with neera tapping. I always wondered why the process couldn’t be automated,” recalls Charles Vijay Varghese, 35.

Years later, he founded Kochi-based NAVA Design and Innovation, which has developed Sapper, a neera extractor than claims to increase a tapper's productivity by 72 percent. Using the automated extractor, a tapper needs to climb up a tree only twice, once to install the device and then to remove it. NAVA is recognised by Department of Industrial Policy and Promotion (DIPP), Startup India. 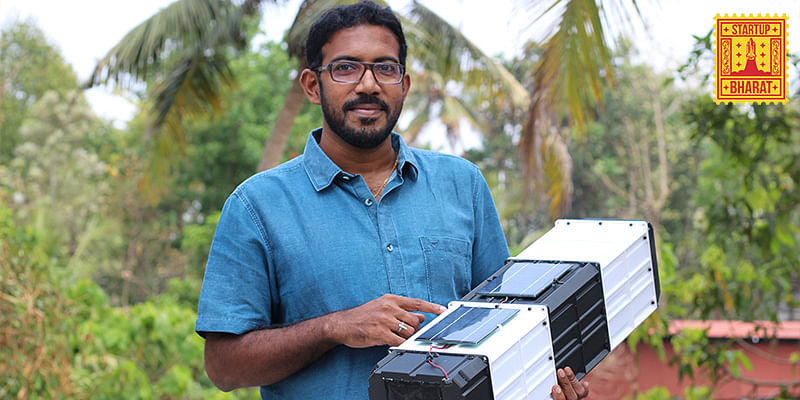 Charles Vijay Varghese, Founder of NAVA Design and Innovation, poses with the Sapper

NAVA, which was incorporated in August 2016, is a member of Kerala Startup Mission.

Charles is an engineer from M Kumarasamy College of Engineering in Tamil Nadu. After graduation, he did a post-graduate diploma course in 3D animation from Image College of Arts, Animation and Technology (ICAT), Chennai. He went on to win the Kerala Cartoon Academy Award in 2015.

Charles worked in the Middle East for 10 years after that. The seeds of his company were sown while he was there - he registered his company while working as an Assistant Unit Manager at Khimji Ramdas in Oman. In July 2017, he quit his job and incubated his company in Kerala's Maker Village.

His family has a coconut farm where they have been toddy tapping for years now.

“Starting up in Kochi meant I could experiment in our own coconut farm,” he adds.

Watch Charles explain the technology in this video:

How does the extractor work?

A coconut tree tapper has to climb up the tree to fix the device on the inflorescence. A thin and long pipe connects the device with the tank on the surface, where neera is collected.

Once the device is installed and switched on, a notification is sent to the farm manager, informing him/her of the same, through a mobile application. After installation, the robot sensor finely slices the sap to extract neera.

"With the help of vacuum extraction, the tube deposits neera in the collection tank," Charles says. Every day, on an average, 1.5 litre of neera is extracted. 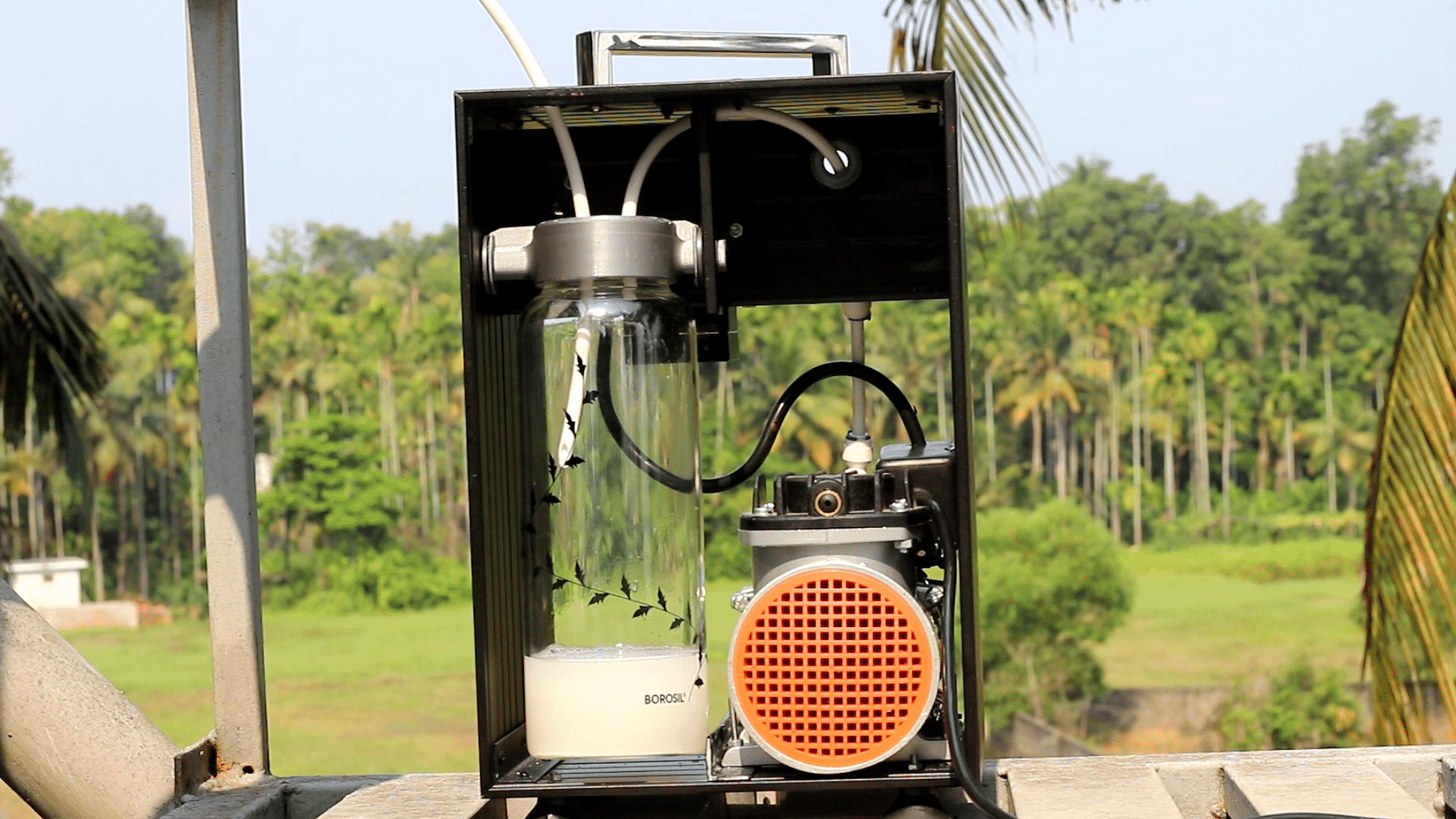 After almost three months, another notification is sent to the farm manager, stating that the entire spathe has been sliced and that it's time to remove the device. This is the second time the tapper has to climb up the tree.

“The device uses artificial intelligence (AI), and fully runs on solar power with an integrated battery,” Charles says.The device uses sensors to identify the flow of neera and the ripening age of the inflorescence.

Challenges along the way

For this, Charles had applied for an International Patent Cooperation treaty that expires in another 30 months.

"I have applied for a full patent; managing the finance for it was a challenge. Full patenting required Rs 15 lakh and I had to take a loan for it," Charles says.

NAVA will patent its product in all 11 countries in the next six months.

The second challenge lay in creating awareness about the product among traditional Indian tappers need.

“They tend to believe that our device would take over their jobs, when in reality, it will only increase their productivity by 72 times,” he says.

Currently in the prototype stage, Charles says NAVA is working on a Minimum Viable Product (MVP) that will use more AI and machine language (ML) skills. 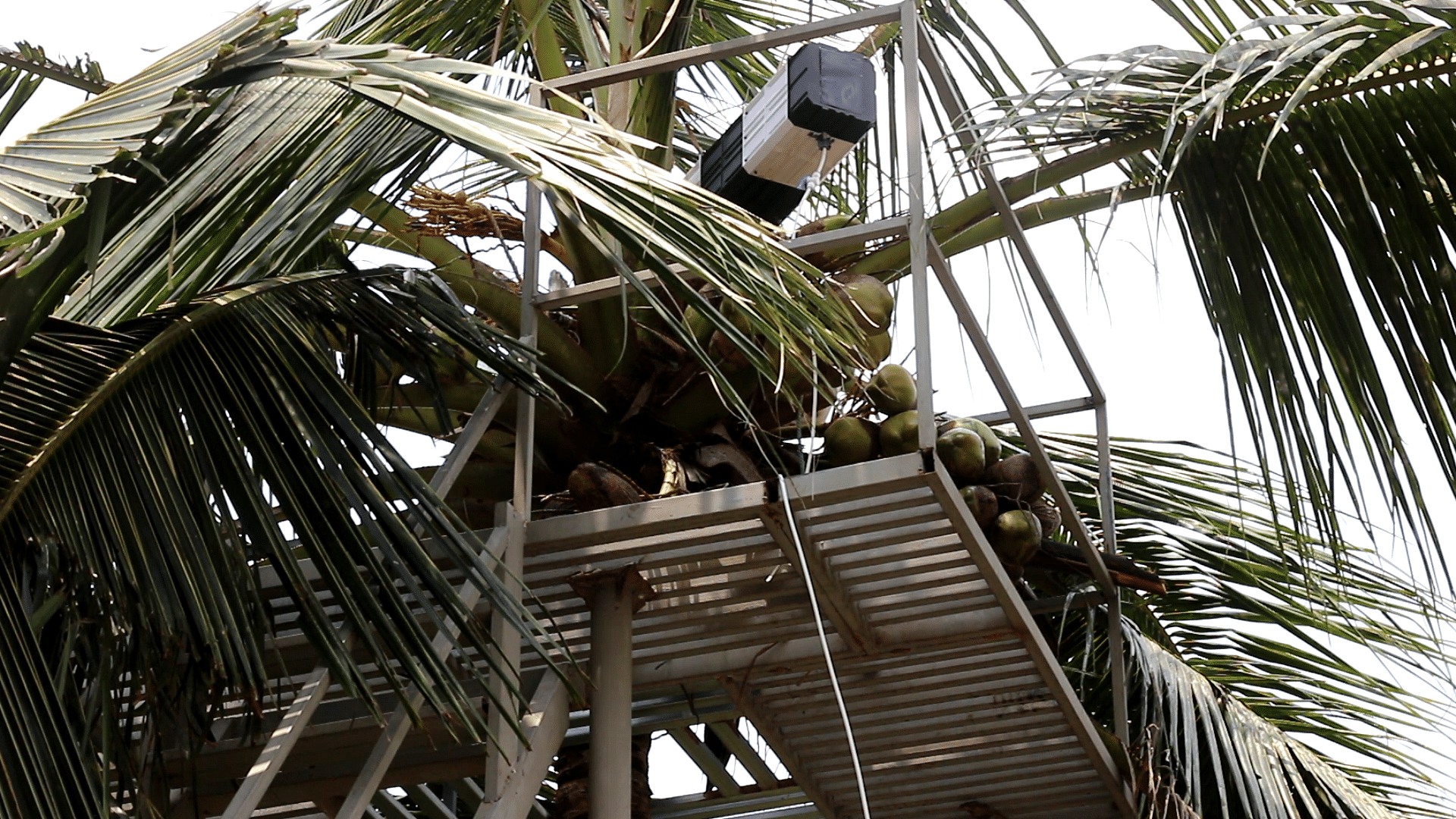 Sapper connected to a palm tree

NAVA’s neera tapping device is one of its kind and Charles is patenting the product to remain unique. The startup was initially bootstrapped with Charles investing Rs 10 lakh of his savings and borrowing another Rs 15 lakh from the bank. Later, NAVA received a grant from the Kerala Startup Mission, and won the Bharat Petroleum's Ankur Grant.

NAVA is currently in talks with mass neera manufacturers from Sri Lanka, and the Philippines. Once they strike a deal, the plan is to partner “with manufacturers for bulk production of the parts”. “Assembling and packaging will be done by us,” Charles says.