India had 10 Unicorns from 2011 to 2017. Since then, the coveted club has grown by leaps and bounds. In fact, the year 2019 saw the birth of three unicorns, including Delhivery, BigBasket, and Dream 11. The country now boasts of 22 startups that are valued over $1 billion. Apart from increasing their own valuation, these unicorns have over the last two years created 13,000 direct jobs, with technology and business development skills being the top two key focus areas of recruitment, according to a new report.

Xpheno, a Bengaluru-based HR startup, in its recent report Unicorns: Employment Accelerators?, says unicorns in India cut across segments such as ecommerce marketplaces, on-demand services, travel and logistics, fintech, and digital content, and had a direct employment base of around 60,000 people in FY19. 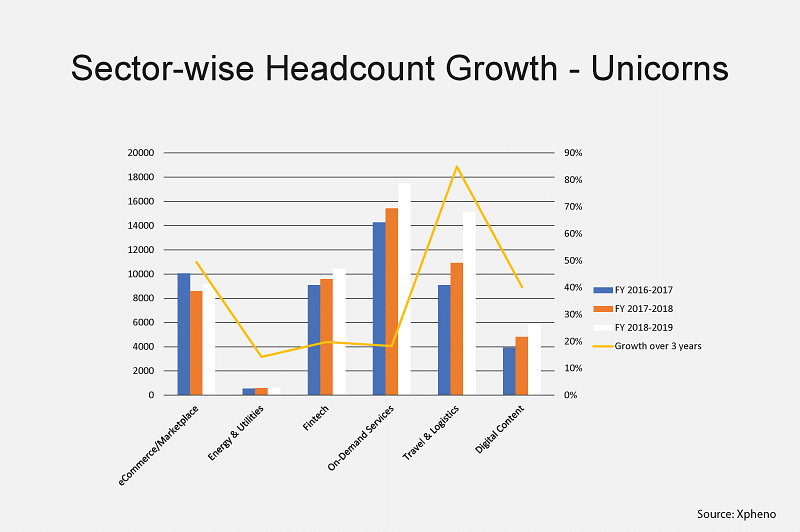 Also read: India will have more than 100 unicorns in the next 5 years: Binny Bansal at TiEcon Mumbai

“Technology continued to be the top growth function for employment, followed by business development and sales. As more Indian unicorns (and soonicorns) continue to enhance their competitive technology fibre and differentiating sales ecosystem, employment acceleration observed is expected to continue into 2019 and 2020 across more new and non-traditional industry sectors,” the Xpheno report says.

On the employment generated by unicorns, Kamal Karanth, Co-founder, Xpheno, says: “OYO has led the way, followed by Swiggy, Zomato, and Byju’s in terms of direct full-time equivalent (FTE) additions. The first three have also led to substantial income generation for about three-four lakh people by virtue of their last-mile touch business model.”

And despite the Hiring sluggishness at ecommerce and social unicorns, the overall headcount growth rate has been 40 percent over a three-year period.

Unicorns deliver various kinds of services and goods, but the defining factor of their success is based on the kind of technology hires they make. Across companies, technology hiring dominates, accounting for a 50 percent rise in employment. Unicorns such as OYO Rooms and Udaan have, over the last one year, witnessed over 100 percent growth in employment in their engineering and IT functions. 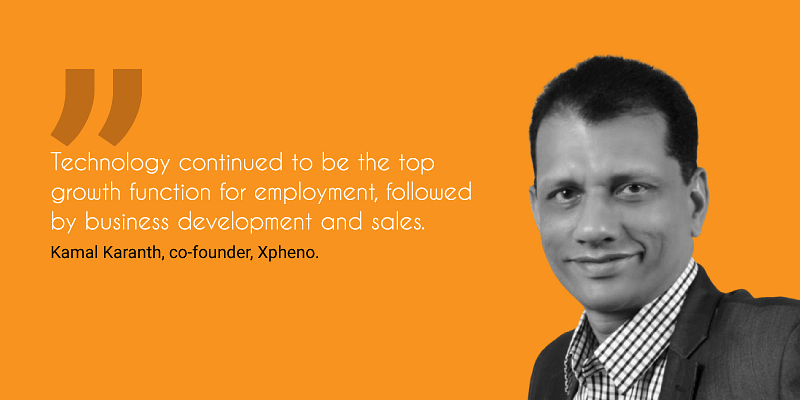 The second key focus area of hiring has been in the sales and development function. As unicorns achieve a certain scale in their operations, the importance of sales and business development rises. This has been the key factor for companies such as Byju’s, Swiggy, and Zomato recording an average of 60 percent growth in hiring for these functions.

The report states that hiring by unicorns in India is also closely related to the funding they have received. According to Xpheno, the correlation between funding and headcount addition is strong. Companies such as Oyo and Udaan, which received fresh funding in the last six months, have increased their hiring tempo, industry sources indicate.

However, the story about hiring by unicorns isn’t just about direct employment they generate; it is also about creating an ecosystem of indirect hires. There are estimates that these unicorns have created close to one million indirect jobs, including those of delivery personnel, security guards, handlers etc, which may not require high level of skills.

According to BetterPlace, a platform that manages the life cycle of blue collar workers, around 1.7 million people are engaged in this segment with functions such delivery personnel, drivers, and security employees. Most of these employees work for Flipkart, Amazon, Swiggy, Ola, Zomato, Uber, and several other unicorns and soonicorns.

A report by BetterPlace estimates that there will be 21 lakh job openings in the blue collar segment in the next 12 months, of which around 14 lakh will be absorbed by the gig economy. The broad trend shows a shift of traditional blue collar jobs from segments such as infrastructure management services and security to gig-based jobs as these provide increased flexibility, higher salaries, and attractive incentive structures.

The gig economy is important to unicorns in India, especially for those into ecommerce, food delivery, cab aggregators, and logistics. BetterPlace estimates that in the next 12 months more than eight lakh jobs will open up in the logistics sector, followed by on-demand and other transport-linked drivers (six lakh) and security guards (3.5 lakh).

Job creation has become an important priority for the policy makers in the country. India generates 12 million graduates every year.

“India needs to create one million jobs every month and we have to encourage entrepreneurship in areas other than technology, for the country to create employment,” says Mekin Maheshwari, Co-founder of Global Alliance for Mass Entrepreneurship, a platform that wants to create 10 million entrepreneurs. The organisation wants to focus on “Bharat” as they believe startups alone cannot create mass employment.

One of the biggest job creators in the country in the recent past has been the IT industry, which currently employs around four million people. But, of late, hiring in this sector has dropped due to various factors. The slowing demand for IT services has seen the industry recording growth of below 10 percent, increased automation, and the shift to digital.

That said, India’s startup ecosystem has turned out to be one of the main drivers of formal and informal employment. And with growth continuing, there’s no reason for it to stop.

Also read: On the job: the state of the blue-collar gig economy in India

The 10 Leading Blockchain Companies o…
Three Top Strategies for Effective Pe…
87 Ideas to Start a Side Hustle Busin…
Top 11 Steps to Improve Your Page Loa…
What do you know, it really is not ab…

On the Pressure to Buy Books