A historical, religious site to visit even for non-Hindus. According to Wikipedia the Cave is around 400 million years old. As a self-proclaimed nature enthusiast and a person who loves ancient things and archaeology, it is one of the places I loved to visit. 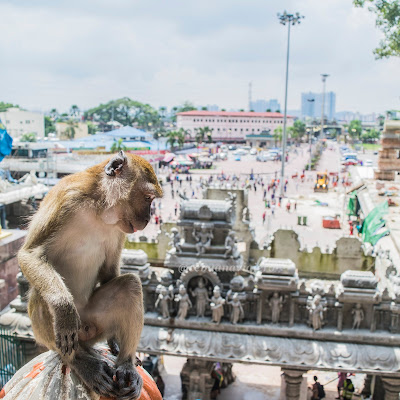 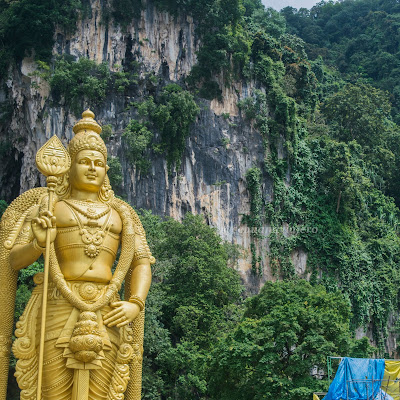 Let's start out journey on how to get to Batu Caves. First, it is located at Gombak, 68100 Batu Caves,  Selangor, Malaysia. By the way, just a fun trivia, "batu" in my Bisaya dialect or in the Filipino language means "rock" or "stone" although it is spelled as "bato" and apparently it has the same translation in the Malay language.

Now, you have to find your way to KL Sentral. There are timetables of the trip that you can find before buying a ticket. When you are staying for 2 days or more, check the time on the first day or just be in the station before 6:45 AM, the first Train, if you want to be there early. During off peak hours, the frequency of the train will be 20-40 minutes or longer. During our trip, we had to wait longer and the train was late for 2-5 minutes. Just be patient enough and relax. If you don't get to ride on the train and the next train will still be more than 30 minutes or so, just go and chill out in the mall just next to the station.
The one-way train ticket for one person was RM 2.60. It takes 30 minutes to get to Batu Caves from KL Sentral. We went there on a Sunday and forgot it was a weekend, didn't expect there will be a lot of people. But we only found out until we arrived there, but it didn't hurt that much. The only crowded place was when you get off the train and about to go out of the station.
First thing that would greet you are vendors that are selling memorabilia, food and drinks, and others for worship or praying.

There is a small zoo before you get to the entrance of the caves. 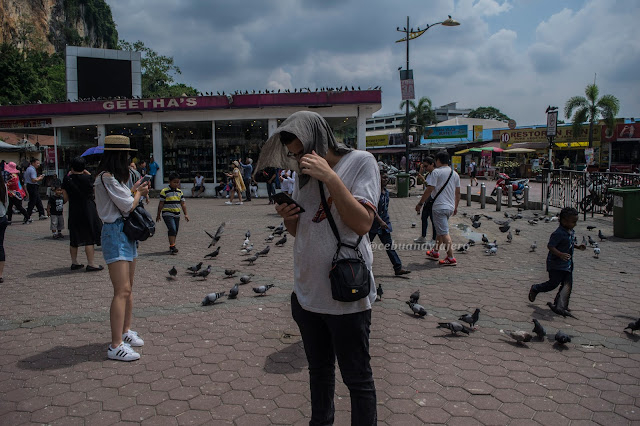 Please be informed that when it is sunny or partly cloudy, it is going to be really hot. So bring an umbrella or hat to protect yourself from the heat and water.  We had to use handkerchief since we didn't have any hat or umbrella with us.

If you want some cold drinks or some coconut water, you can just buy it from the stores nearby for an affordable price.
There is no fee to get into the cave. There are regulations in going inside the cave however. 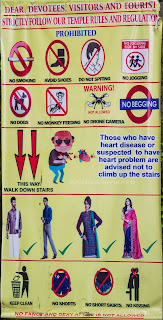 You can still rent some skirt to cover your legs as it is not allowed to wear shorts inside.
Once you start walking up the stairs, take your time and enjoy. Be careful when you  bring some food because there are monkeys everywhere and they are very vigilant and will try their best to steal your food. 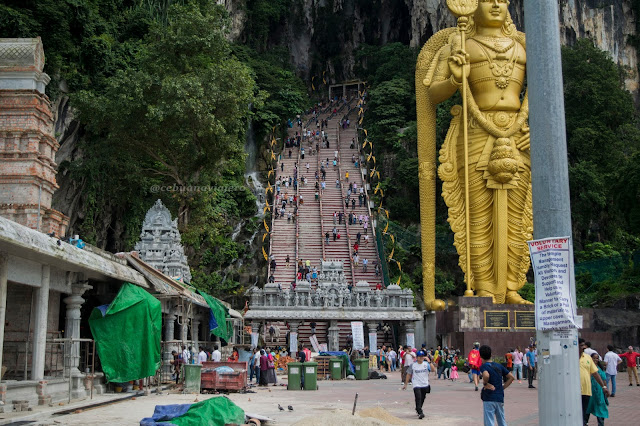 It is very steep and the stairs has just a few gaps in it so best to be careful and hold on to the fences/railings.
It rained a few days before we went there so the cave was a little damp. 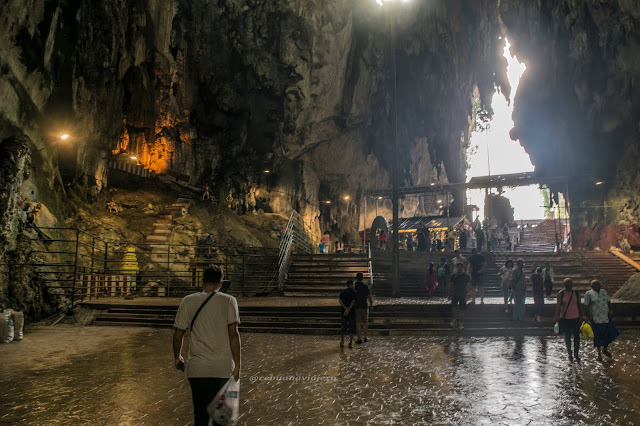 And of course, because it is a cave, the smell of bat urine is everywhere. It is very pungent, so if you aren't used to it, try to cover your nose with a wet handkerchief.
There are many altars located inside the cave for worship. If you go further, you will find another temple at the end of the cave. 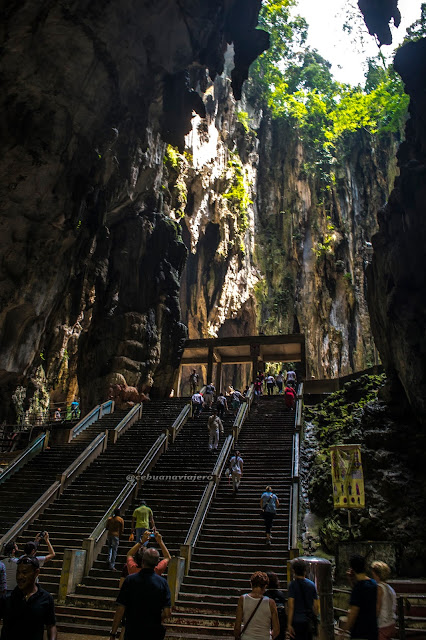 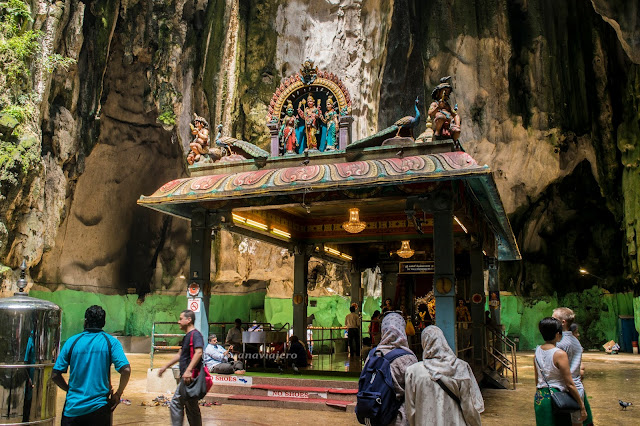 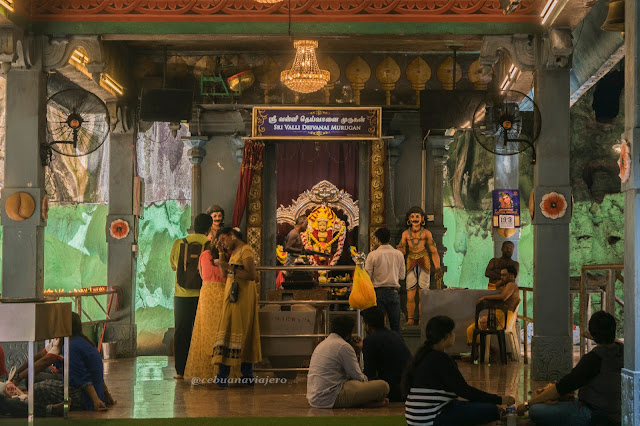 The cave is really interesting and amazing. The light comes in from the hole on top of the cave. 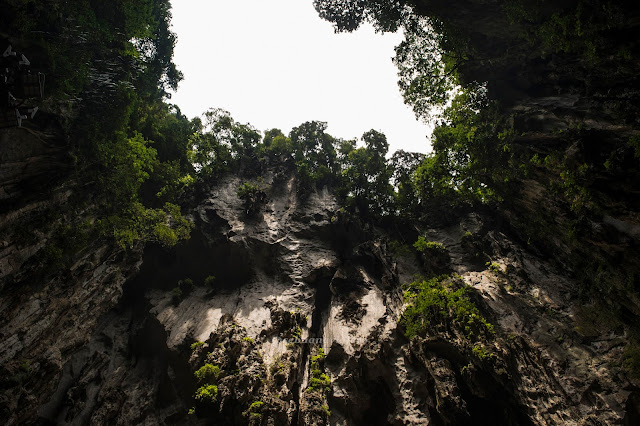 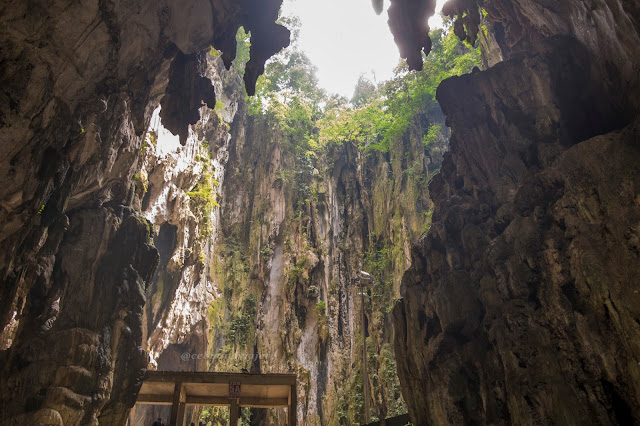 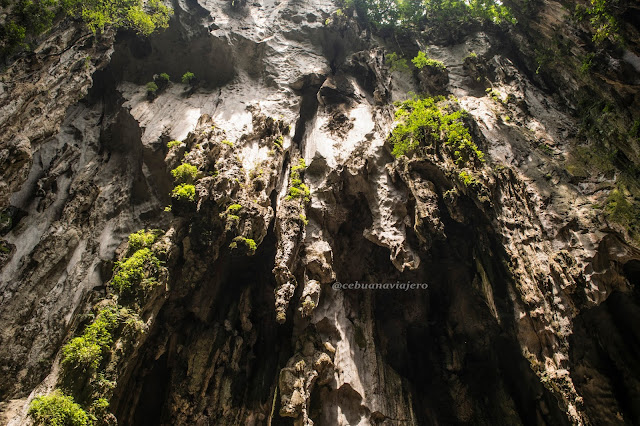 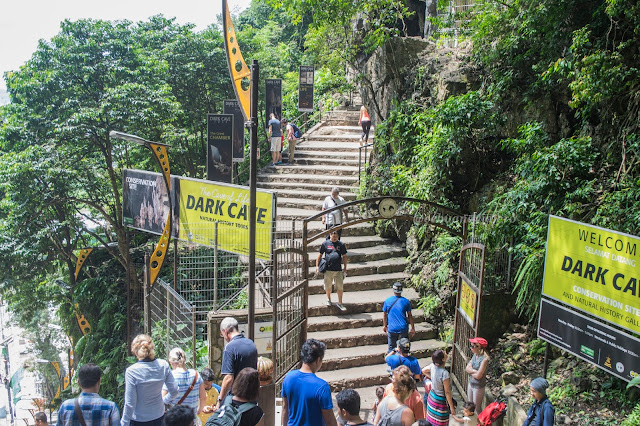 Before you go inside the main cave or after you go out, you will see this Dark cave, however we had to pay an entrance fee to get inside, so we didn't go there and just enjoyed our time watching how monkeys spend their days outside the cave. 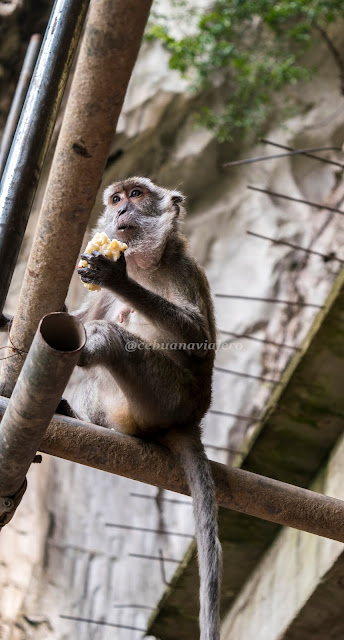 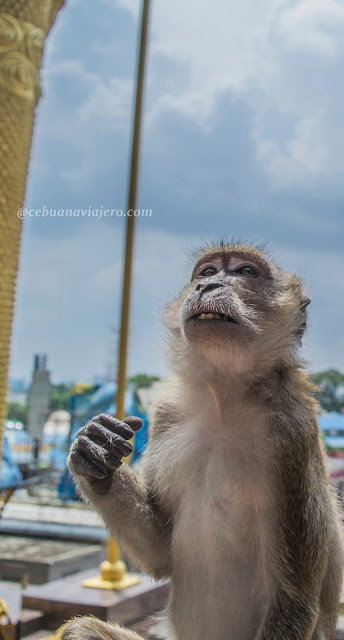 There was this Japanese couple who were giving small apples to the monkeys while trying to take a photo with the monkeys. The monkeys seems to scare people by showing their teeth and creating a really loud shriek. 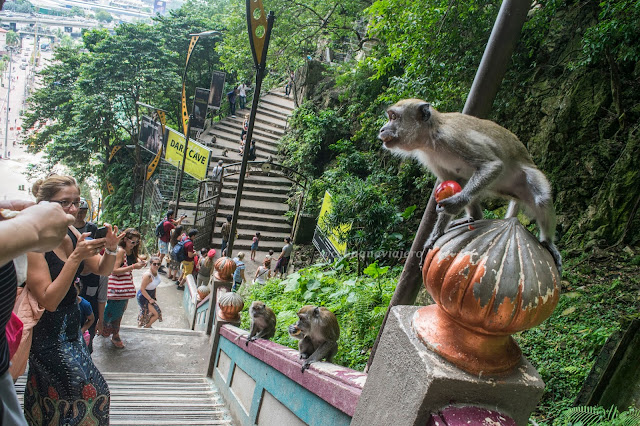 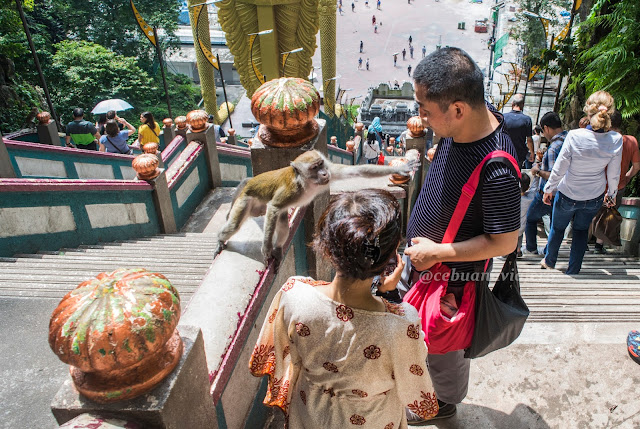 During that time, we also saw an incident where a monkey stole a guest's drink from her.
But the most amazing part is when monkey parents are guiding their babies. One of them was a father who was teaching his baby on how to ask or get food from humans. 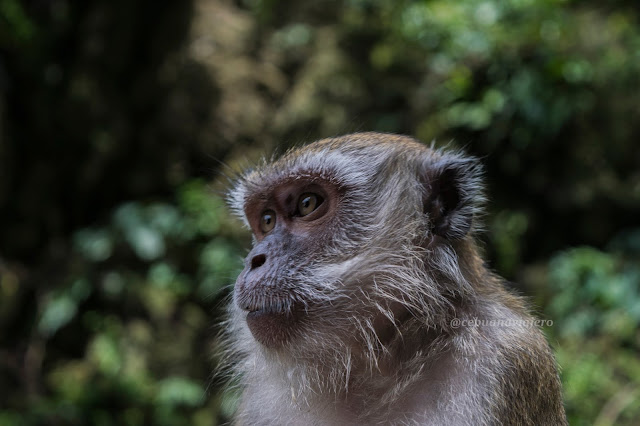 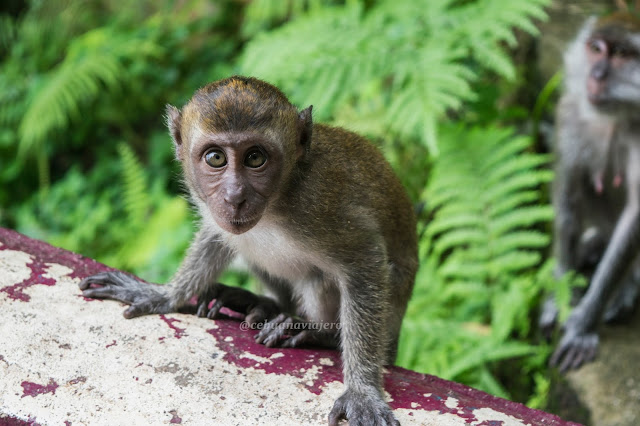 And a mother was gathering food together with her baby.

And when you are carrying some plastic bags, monkeys will be curious with you. These monkeys are not tame at all, they are still wild and might be dangerous if you accidentally try to be close to them. So it is best to just stand with a distance in between them to be safe for both monkey and human. 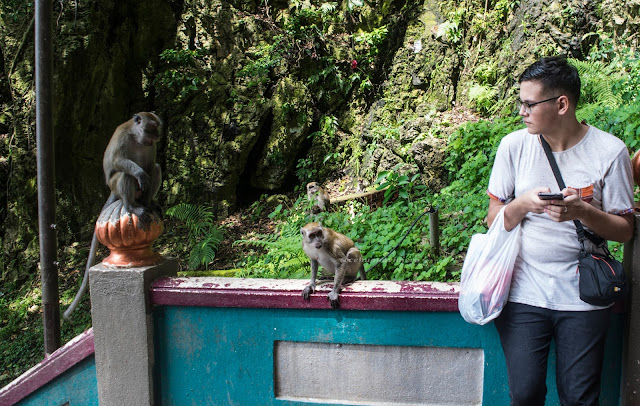 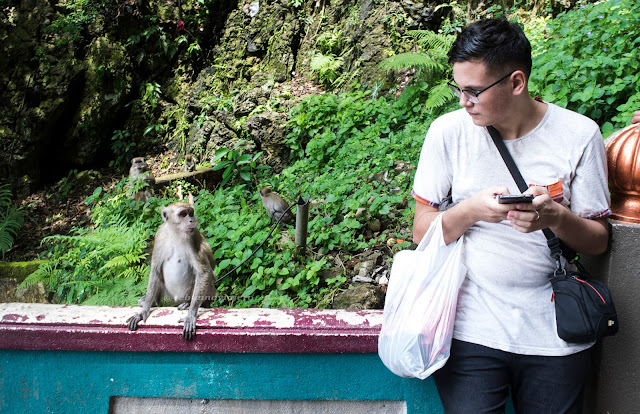 P.S.
I was able to feel a monkey's fur. One was running down through the railings in the picture below, and I tried to touch it while it was running down. The fur was so silky and smooth. That was enough for me. I don't recommend you to do the same thing as what I did, as it is dangerous. 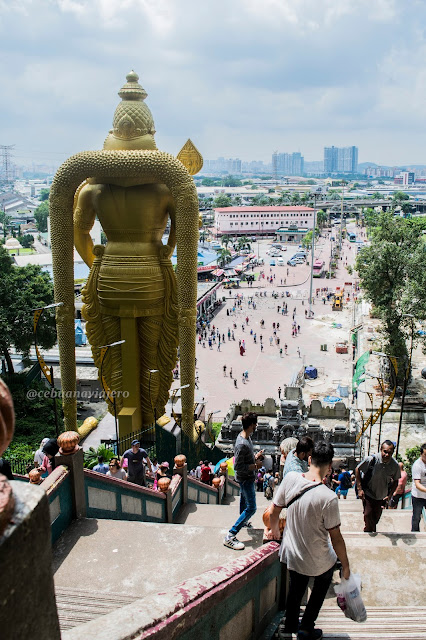 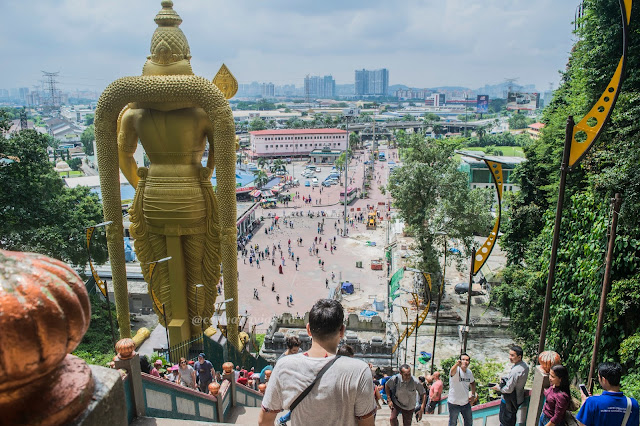 I hope you enjoyed looking at the cute monkeys!

Thank you for reading! Please anticipate for the next food or travel adventure!