Another reason we went to Cagayan de Oro was to enjoy adventure rides!
Well, we both are Acrophobic but still we want to try it. Why? Because why not!

We can have an arrangement from vans to send and pick us up all the way to the destination, however, it was very costly in our part as it was only the two of us traveling. So we opt on going there by ourselves.


We left the hotel around 7am and rode a local taxi and asked the driver to send us to Agora Bus Terminal and to drop us off to a van that will go to Manolo Fortich.

Right after we found one, we had to wait until the van is full, we were the first passengers as the other van was already full and had left for the trip. The wait was only for fifteen (15) minutes and we were on our way to Bukidnon.

The fare from the terminal to Camp Phillips was sixty (60) pesos per person. We had to pay before the van leaves. Apparently, the driver will send each passengers to where their destination is supposed to be. It was amazing. I have not had any of that experience until now, since most vans in Cebu only send us in the highway and we have to walk all the way to where we were headed.

Anyway, we were the last passengers of the van driver, he knew that we were going to Dahilayan so he helped us looking for a habal-habal (public motorcycle) driver that would bring and pick us up to the Adventure park.

The cost for the return trip per person was 300 pesos. We did not ask for any discount as we know that it is his job and the price is not that pricey. The habal-habal driver did not only send us to the adventure park but also gave us some info about the area like the Del Monte Pineapple Plantation, the employee houses in different colors in Camp Phillips, and others.

It was an incredible feeling when riding a motorcycle and feeling the wind getting colder as we went higher to the mountain. It did not feel like I was in the Philippines with the cold and the fog we could see surrounding other mountains. Also, with the mountain pine trees standing tall beside the road. 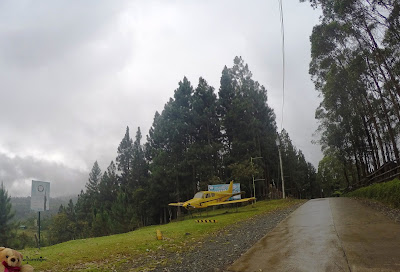 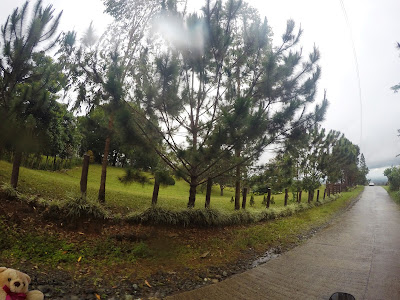 When we finally arrived in the adventure park, Mr. Driver left and told us to contact him whenever we want him to pick us up.

The first activity I did was the Skytower Base Jump. Every time I remember about this experience, I could still feel my body reminiscing each moment that had happened in it. 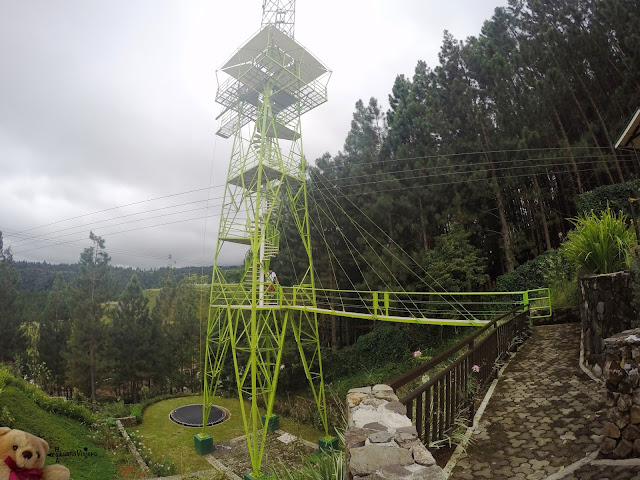 Together we walked all the way to the Skytower, but only I was in harness. Then the staff helped me put on the ropes. Right after he told me, "Jump!". I wanted to, no, I actually did not want to. I tried forcing myself to do it, but whenever I do, I imagine stepping into the air and feeling nothing and just fall. that was not a great imagination and not a great thing to experience either. The staff, Kuya, still encouraged me to jump. I was like, "What? You are encouraging me to jump? It's like doing suicide", in my mind. I attempted a lot, until I just told him, "Can you just push me instead?" 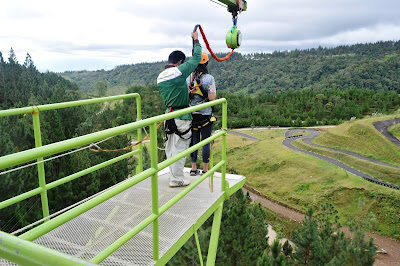 He instructed me to spread my legs wider, shoulder width wide, and step more forward (I was only going forward half a centimeter only). He also told me that he will push me at a count of three.
I had no time to hesitate, when he counted three I fell like I jumped and felt the intensity of the gravity trying to pull me down, like my soul and body separated for a while. That my soul is left on the tower and my body was falling to the ground. Right then and there, the tower kept the impact and I was having a good fall, a relaxing one.
It felt like committing suicide, it was scary and I did not like the impact at all. But I would want to do it again, the fall into the trampoline was fun. Feeling my knees being so weak after that, having a hard time to get up was funny. 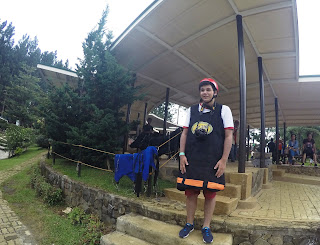 Then we went to have the longest zipline together. We went to get our helmets and protective gears, and rode a vehicle that would send us to the higher part of the mountain. We looked like we were patients of some kind of hospital, it was funny wearing it.
When we finally arrived, we lined up in pairs for our ride. Calvin and I were the last pair and the staff were laughing at us as he was joking of going back home. 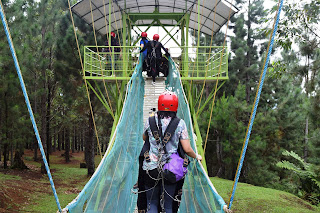 We then get ready, they set us up, and there we go. Looking at the beautiful scenario of Bukidnon, feeling the strong cold wind upon us, and feeling like Darna! (Filipino superheroine like Wonderwoman in America) at that moment. But because Calvin was heavier than I am, he went faster and left me alone. 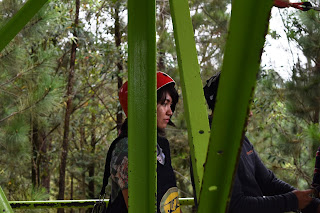 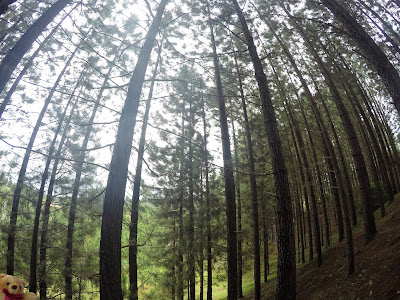 We walked for a bit, cooled down, and enjoyed the breeze. 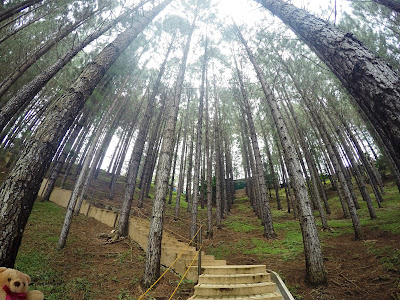 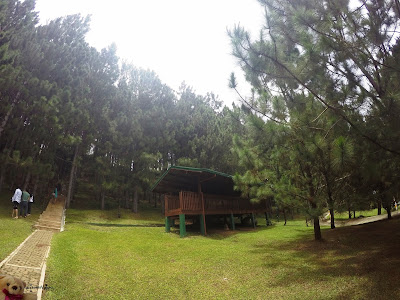 We looked for the dropzone area and sat down at the waiting station only to find out that no one was going to do the dropzone except for us. So we went there without any idea just like me not having an idea in the Skytower. We did not see anyone doing the dropzone so we just confidently walked and followed the instructions.
They made us wear safety gears again, hold the railing and suddenly we were in the air with some rope holding us into it. Since Calvin was in my right side, he was instructed to pull the lever or some kind of rope at the count of three. After understanding the instructions, we were pulled up really high.
From the height of 120 feet above the ground, we fell and swung around. It was as if no rope was holding us. We were just in the air and suddenly we got dropped like how humans pick up ants and just drop them into the floor. We swung around and the swing part was getting better as we get used to it. We could still feel everything though until now. 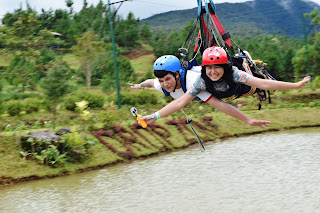 And that activity made our legs and knees shake a lot, but I still have to do the ropes course. But shock! I have to do it myself, I just kept calm and tried talking to him while he was in the ground even when there were a little bit of shower. 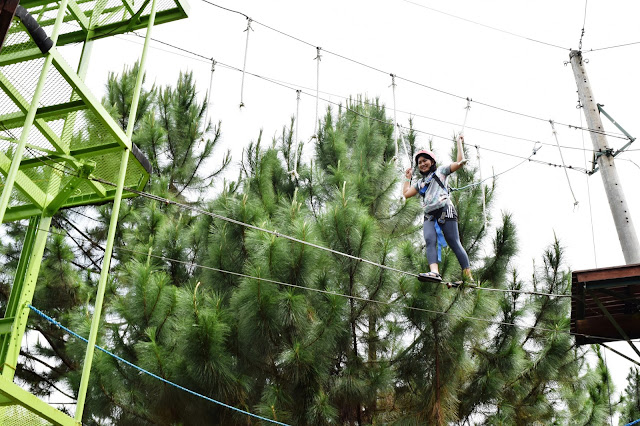 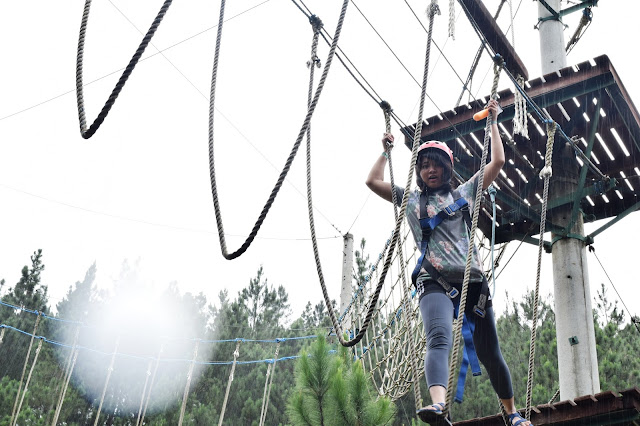 Finally when all the activities were done, we drank some tea and waited for the rain to go away.
We also contacted the habal-habal driver to pick us up. 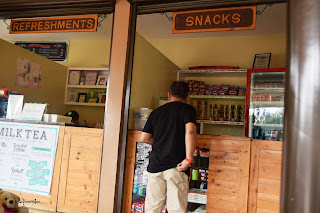 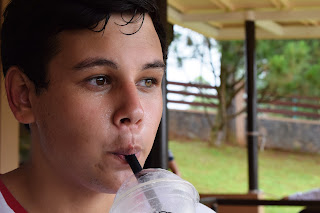 He arrived when it was not raining that hard anymore with his raincoat, we were okay we did not mind about it and just kept our gadgets safe from the rain. 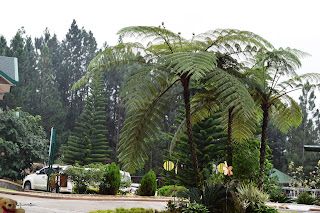 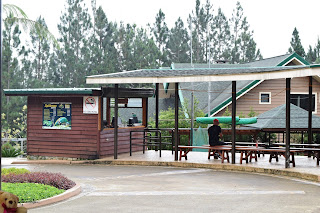 Going back to the Camp, because we were a bit wet, it was quite cold during the motorcycle ride. The rain was only in the top of the mountain so we did not get wet that much.
He also helped us take photos of us in the Pineapple marker and sent us to where vans wait for passengers.
We gave the habal-habal driver 700 php instead for his aid and hospitality. Rode the van since we were the last passengers to fill it up and went back to Agora Market and walked our way to the hotel.

The adventure was quite good although the terrifying part is doing it ourselves like jumping by myself in the skytower, pulling the lever in the dropzone, and of course climbing the rope course myself like in a team building.

Anyway, the staffs in the dropzone area took a very good photo of us using our own camera.

It was indeed a splendid activity for the two of us that we will always remember reminisce and will share to other people and to the generations to come.