Vietnam via Singapore with Tigerair 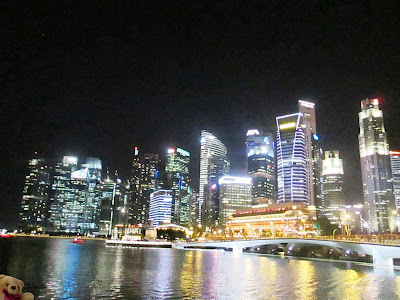 Calvin and I bought tickets to Ho Chi Minh City, Vietnam with a connecting flight to Singapore from Mactan Cebu International Airport via Tigerair.com online. He has a check in Luggage of up to 25kgs, while we have extra cabin luggage of up to 10kgs and other extra belongings.
Our flight was at lunch time and we ate early breakfast so that we would not get stuck in traffic at Mandaue City. We had to be in the airport three (3) hours before our flight schedule as it is also the time the check in will open. We could not check in online as well since we have connecting flights so we had to go through the process personally. We arrived earlier than the check in opened.
When check in is open, we lined up, and finally it was our turn. One check in luggage, two cabin luggage, two backpacks, and one souvenir bag. We were not able to check in due to a problem, we kind of brought a lot but that was not the problem we faced. I am a Philippine Passport holder and we only bought one way ticket to Vietnam. We did not buy a ticket back to the Philippines because there was no info from the airline which would normally appear when filling out the passport area. Calvin even got a notification or some other regulations for him when coming in the country since he needs a ticket to go out again of the country due to his passport. The check in counter told us that we can only be checked in if we buy a ticket for me back to the country. Thus, we left our huge luggage in the counter, went to the ticketing office which is located in the entrance of the Domestic Departure.
We also had to get a ticket from the same airline, Tigerair, the cheapest one we got is a few months from our travel time and it cost more than five thousand pesos (5 000 php). Another problem was that we had changed all of our money to US Dollars already; he had to go to the Airport’s Foreign Exchange which had a really low dollar exchange rate. The rate was Php 46.00 per one (1) dollar, no choice, have to do it or everything planned will be cancelled. When we finally got my ticket, we went back to the counter, and checked in.
Problem #2 , which would show a huge problem later, the huge luggage was around 27 kilos. It was 2 kilos more than what we wanted to check in, but they said it was fine because of all the inconvenience we went through.
We got to check in, I had to pay a travel tax of almost two thousand pesos (2 000 php) and both of our terminal fee of one thousand five hundred pesos (1 500 php) that is seven hundred fifty pesos (750 php) per person.
One more stop, the Bureau of Immigration, as it was my first time to travel outside the county, so I had to fill out a form and was interviewed. We only got thirty (30) minutes left before the boarding time. Looked for a place to eat, but there was no place to eat a rice meal or some lechon or any other Filipino food. The stores that were there are expensive ones for shopping and some café and other expensive looking restaurants. So I only bought some Green Tea drink and sandwich to fill our stomach. We are also not allowed to bring outside food to the plane, so I had to finish the food before we board.
It was a four (4) hour trip to Singapore and a twenty-three (23) hours lay-over to go to Vietnam. We decided to stay in a hotel and have a DIY tour than with the free tours given by the airport to the passengers with connecting flights.

The flight attendant will be giving out the visitor card which all passengers should have to be able to pass through the immigration. They normally give it when you are in a stable altitude after take off and before landing. Be sure to have one and properly fill them out to be ready. Please see photos for reference. 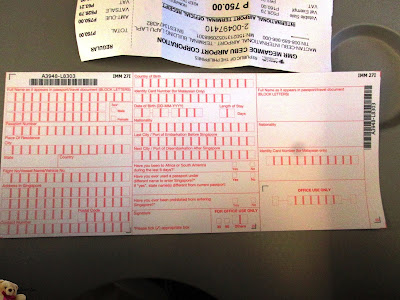 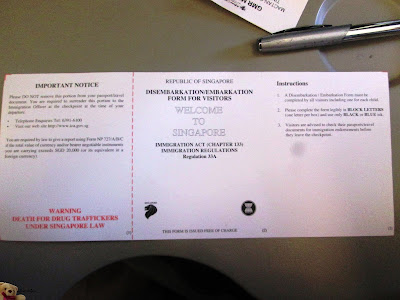 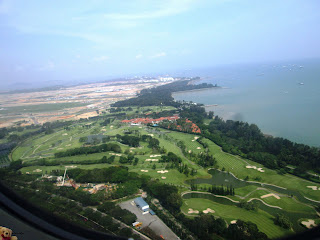 We had quite a day and a rested night. The next morning, we went to the airport exactly three (3) hours before our flight which was scheduled after lunch. We took our two (2) luggages we left at the Left Baggage area of the airport. Looked for the row to check in, it was at the end of the rows. Calvin had already increased the check in luggage to another 5 kilos online and so we transferred most of our things there to fill it out. The problem arose when we were about to go inside the boarding gate, the security stopped us; they checked the weight of all our belongings except the camera bag. We did not buy anything from the country and so we had the same amount of luggage, just around 2 kilos lighter. After weighing them, we had 30kilos carry on. One of Tigerair personnel said that we are only allowed ten (10) kilos luggage per person, thus we have to check in the other luggage. The personnel in-charge of checking in our luggage did not inform us about the cabin luggage and we were happy that the cabin luggage was exactly 10kilos. Checking in another luggage would cost around Fifty Singaporean Dollar (50 S$) and we only had around 15S$. We exchanged some of our 100 peso bills and dollars to check it in again. He was like, “Hey! Stop there. We need to check the weight of your luggage…. Uh-oh, you need to check either one of them.” 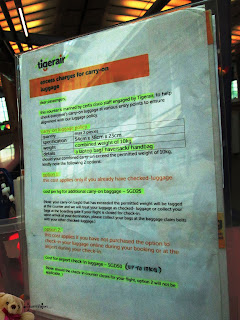 We asked them why we had to do that and we told them that it was not that big a deal when we left Cebu to Singapore. The Tigerair Personnel had told us that each country has different rules. It was really surprising and had scared me when I heard that. Just imagining if I would go to another country using the same airline, I would be paying so much for the hidden charges. They do not inform their passengers well ahead of time about it either. We surely do not recommend the airline. They are indeed a budget airline but they have so many hidden charges that will just surprise you. Some surprises are nice, but not this kind.

Thank you Tigerair for giving us a very nice learning experience, we hope not to fly with you again.
Albeit, we safely arrived in Ho Chi Minh City.

Common Problems with Slit Lamp and Re…
how to remove dark circles in 2 days
Dedicated to a website developer
Menstrual Hot Compress USB Rechargeab…
Calculators.org / Have Fun While Your…

Vietnam via Singapore with Tigerair