As a Japanese drama fan, I've seen a lot of Japanese dramas. One of the dramas that left me an impression is "Absolute boyfriend" or in Japanese title, "Zettai Kareshi". This is actually a live adaptation of a manga series with the same title.
The drama revolves around three main characters:
*Riiko Izawa - female lead
*Night Tenjo - programmed boyfriend
*Soshi Asamoto - son of the owner of the company where Riiko Izawa is working

The story goes as Riiko was looking for a boyfriend, she found herself answering questions for a certain interview. Little did she know those questions and answers were the needed information will be programmed to her soon-to-be boyfriend.
The next few days, a package arrived and a robot was inside it. A male robot that when kissed, activates it or provides as a power on. The robot was named Night Tenjo and he acted as his perfect boyfriend for having extra strength to carry and run, and to be able to cook or to do what she needs.
On the other hand, Soshi worked as a superior of Riiko and he developed feelings towards her. They joined contest in making sweets and made their relationship closer.
In the end, she'll have to choose whether to be with the robot, or a real human.
I won't talk about the ending anymore, anyhow. I liked the drama. It has few episodes but worth the watch. Oh! And I am talking about the drama because from there, I found choux cream.
Yes! Riiko, the female lead, loves baking pastries. One of the reasons why Soshi looked her way was when he tasted the desserts she made.
When I was a student, a college/university student, I heard that a new shop has opened. Most specifically, I heard it was a sweets shop. As a dessert and sweets lover, I was excited to hear about it. My excitement escalated when I heard it sells choux cream products!
I couldn't wait to buy something from there, so after a few days of the opening. I brought one piece since it was a little expensive for me at that time.
Since then, I've been visiting the shop monthly. I sometimes buy once a month, and sometimes, weekly and takes it as my lunch.
Gaisano Country Mall is one of the oldest malls in Cebu. It has a beautiful architecture looking like a mini castle in the middle of the city. It has a lot of customers, but you don't see it being so populated. However, I cannot guarantee the quality of their service. This mall is just across the school.
The shop is located in the basement area of the mall. From the entrance, turn to the right of the aisle before going inside the supermarket.
Few shops before and notice a brown and yellow themed shop with a cute green puff with wings icon and the shop's name has a "Choux" in a big font and "Cheesecake" under it and a small font. 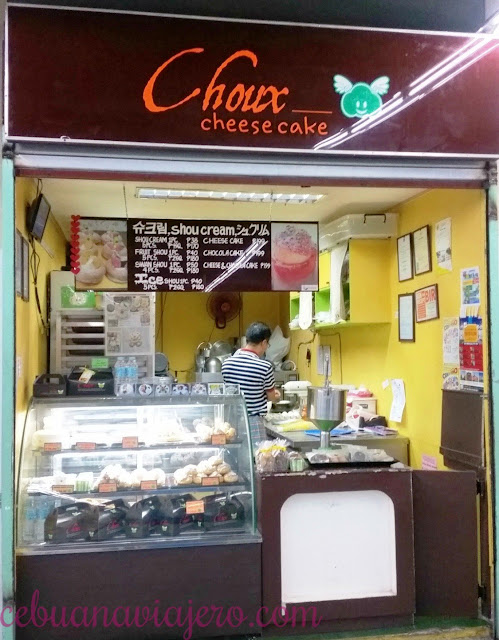 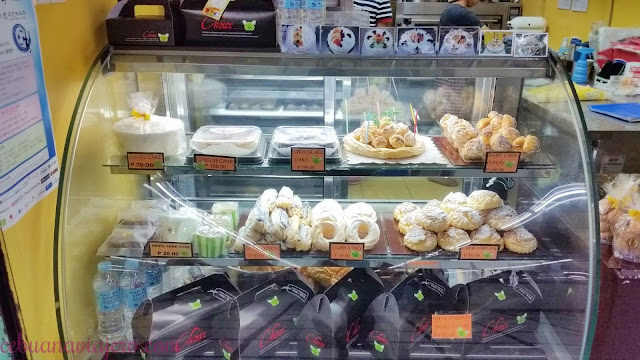 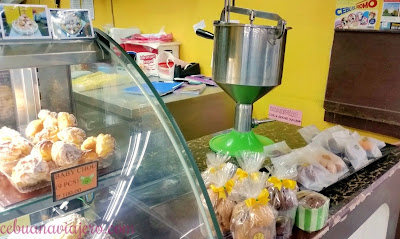 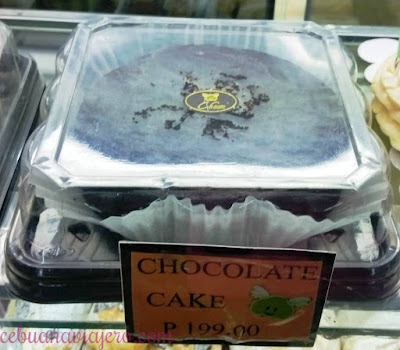 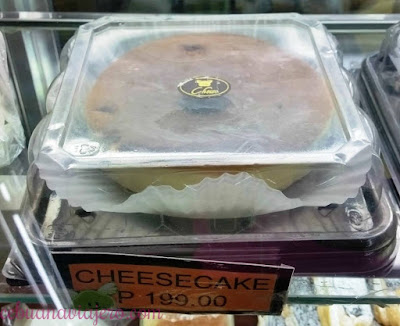 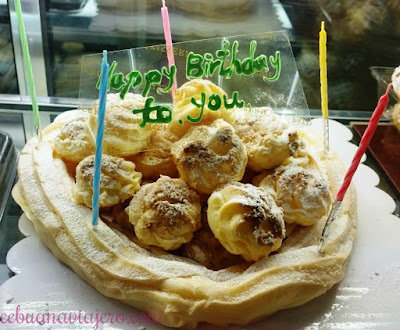 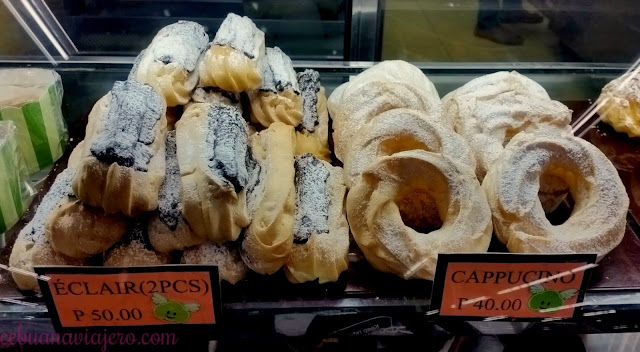 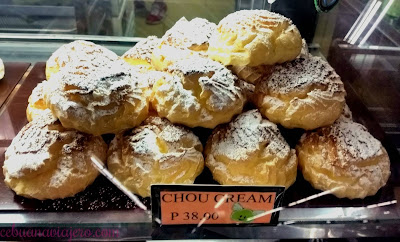 It opened on July 2013 and is owned and managed by Pastry Chef Jung. He himself is the one who makes the dough and the cream. Though he has some staffs he trained to do them while he is away. Also, the way he packages the product is just way cute and fancy than others especially when you buy the special Choux Cream Puffs. Just look at these boxes: 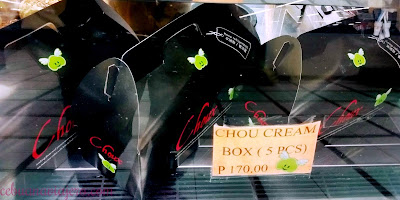 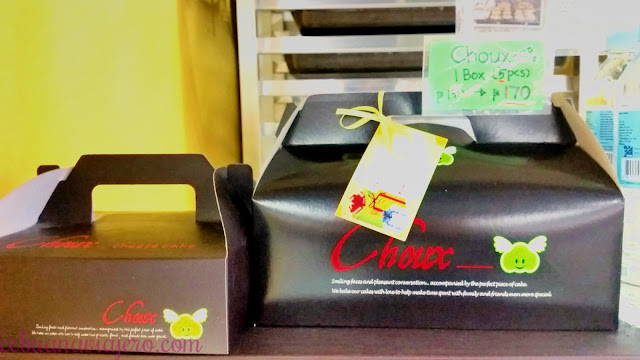 Aren't they cute?
What I liked about the pastry is the crisp and tender feeling of the dough and the filling has a heavy texture to it, it felt almost like melted ice cream with a fuller feel with it.
Just beware that when biting immediately to the pastry makes the filling spill out of it. Thus, when eating outside, it is important to properly eat it so as to keep yourself clean from mess. There are also bite size cream puffs, that would be easier to eat while walking.
Cream puffs with some pineapples and grapes taste good too! The sourness of the fruit compliments the sweetness and coordinates with it like a sweet song of harmony. 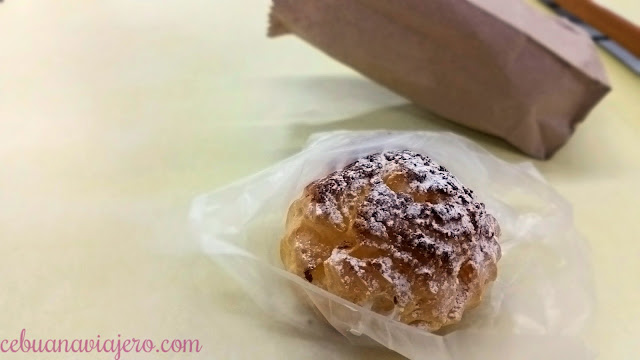 I mostly get a little bite at first and slowly tear some of the dough on the top and dip it in the filling and take some filling. With that technique, the filling is shared to all the dough.
The heavy density feeling of the cream makes it good and taste so heavenly soft. The softness of it and the firm dough makes a good mixture to it.
I enjoy the gap of the two. It's like a husband and wife, the flexibility of the wife and the tough characteristic of the husband.
I enjoy it so much that even while eating alone outside or in the food center of the mall, I couldn't resist smiling so much.
It makes me feel so thankful for being alive, to be able to taste these kinds of food. Though I wonder if that is the authentic taste of the cream puffs.
And oh! It has a light sweet flavor, so it makes someone feel full after eating one to two cream puffs.
This is specially good to eat during summer. Since Philippines is mostly summer, it's good to eat every month! Always remember, eat moderately. (Look who's talking. ^_^)