Weekend off to another Island of the Philippines, part of Cebu. One of the famous places for having white sand beaches and some sand bars, Bantayan island.
Bantayan island is located North West part of Cebu.
Calvin has booked a villa and we had chosen Ogtong Cave Resort to enjoy, not just the beach, but the cave for free as well.
He has booked the villa via agoda.com a week ahead. We had also called the resort few days ahead to confirm the booking.
Waking up at 2AM to 3AM to get ourselves ready for our next adventure.
Things were packed the night before, and we were ready.
However, there was a threat, a typhoon was in the Philippines' Area of Responsibility.
I kept thinking positive and tried to convince him that by saying "I bring good weather, so don't worry!"
But I myself prayed for the best weather for our trip. I didn't want it to be ruined, not with it being planned by him. If it would get canceled, then it would be a waste of money to book that certain place. 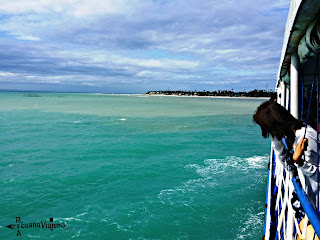 We left around 3:30AM and luckily we found a taxi immediately. As I was looking through my things, to confirm, we had this conversation:
Me: Do we need to bring your passport?
Him: Yes, because I need it to show my identity, remember? I didn't bring any other ID with me.
Me: *in my mind* OMG! I... I...
Me: *to the driver* Mr. Driver, can we go back? I forgot something.
Him: Ehhhh~ You forgot it?
Me; I'm sorry, I saw it last night but dismissed the thought because it might get lost, so I left it.
I forgot that we needed to show them.
Him: That's why I brought it with me.
Luckily we arrived at the North Bus Terminal at around 4AM. However, we had to ride a bus from Cebu to Hagnaya, but the bus will only run from 6AM(the dispatchers said), that would be too late.
So, a guy came to us and told us to ride a van for hire.
The van was a silver Toyota Grandia and it didn't have any stickers around it, nor it seemed like it didn't have a yellow plate number but I didn't see them well.
I was horrified, I had so many thoughts in my head like "Is this kidnapping? What if this isn't a van for hire? I just hope it is. But the car looks so new and nice. What to do? We can run when the door opens and find out it's not good, right?" Calvin just followed me and I explained to him about the bus problem while we crossed the street towards the van.
To my great relief, there were other passengers in the van too. But most of them were guys, so I kept praying for us to be safe, and then other passengers came, men and women. There were like 15 passengers inside the van. We were fully packed. Fortunately, I was sitting beside the window and Calvin was sitting beside me.
Then, they turned the lights inside the car off making it looked so dark, and turned the music louder.
I couldn't see anything on the road since it was still dark, the car's tint was dark as well. The music was loud and I like the songs they played, slowly I drifted off to sleep.
When I woke up, we were at Bonbon to Bogo City already, the sun was rising and the road that we drove seemed to be going east, or maybe it was because of the shape of the road of Cebu. I had never been to the Northernmost part of Cebu since I was very young. I only saw fields and mountains and a quiet road.
I couldn't find any sign to know where we were.
My mom has already asked for our location via text message while I was asleep.
The moment I woke up, my first mission was to find out where we were.
While we were enjoying the scenery and the sunrise I secretly panicked inside. My mind kept thinking that I should catch whatever road signs I could see just to find out where we were.
But the van drove so fast, making road signs blurry in my eyes.

Ten minutes later, we passed through San Remegio, and then we were at the Hagnaya port already!
I had to quickly get my things and hurry to the terminal. We were already lining up, when one person said that we needed to fill up some kind of passenger list before buying a ticket.
It was the second boat trip of the day already and it was about to leave.
The ticket was for Php 170.00 (each) and another around Php 5 to 10 pesos for a terminal fee.

We were able to sit on the boat at around 7AM and it started to sail to the island almost 8AM already making us arrive around 9 to 10AM. But it wasn't an easy ride.

The first thought that the water was calm was actually not. The water had big waves, and some waves even splashed on our body and faces.

It was a wrong time to visit the east part of Bantayan island. I realized then why the resort was really cheap.
When we went down the boat, we started walking out, finding a public vehicle we could use to go to the resort. There were so many sales people from different resorts, for first timers, and for those who didn't book any room/cottage/villa yet.
It was even funny when a person told me that I looked familiar, that it seems like I've been there. He was trying to make me curious, but I didn't go with his flow. He was trying to take some information about us, but I didn't say much. I tried to avoid him, but he was so persistent. Even when we already took a tricycle, he rode and still followed us to the resort.
He was from another resort, and it really annoyed me. I didn't have proper sleep, and I was having fun with the boat ride, and suddenly a persistent guy showed up, not wanting to be silent.

The check in time for the resort was at 11AM, but they granted us access even if we arrived early.
It was such a nice, quiet, and relaxing place. I and Calvin seemed to be the first customers of the day.
Unpacked, and prepared everything to swim! It was a day to learn swimming, but wait. Don't forget breakfast.
So heading to their breakfast area, we ordered lots of food. We were so hungry. 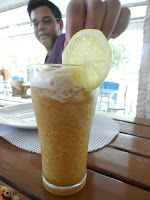 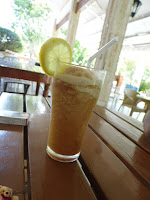 Additional native buttered chicken, chorizo sandwich, and iced tea shake.
After a heartful of breakfast, we went around the resort. 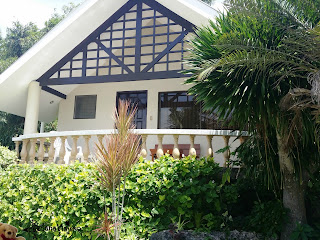 The resort was really big, quiet, and solemn.
However, because of the typhoon and the monsoon winds, the sea isn't that inviting and the water was really shallow, the skies were cloudy as well.

The villa we got was quite spacious, with the choice of twin bed or large bed, or another kind. The shower has hot and cold too. It was air conditioned as well.
The water in the cave is fresh water, you can go deeper to the cave, but there are parts where it is deep and rocky, so it is important to be careful, and must know how to swim (of course). There are crabs, fish, and bats inside. However, just a few of them were inside and exposed. The level of water from this picture is almost neck to chest deep for a 163cm person.
There were few people in the pool and in the cave, making it more fun to enjoy the place since it isn't that big and some rocks are sharp.

Now, exploring the sands, and the beach the resort could have offer. 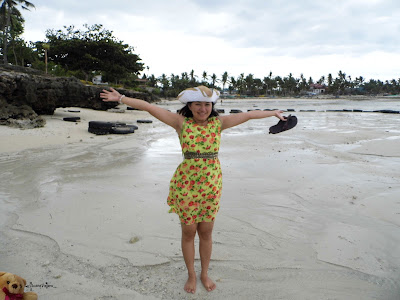 The sands were so soft, so I couldn't help walking in the beach barefoot. 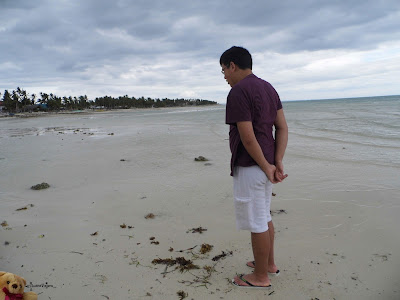 But my companion here, it was his first time walking in a sand/seashore, so he preferred walking using his slippers, but later on enjoyed walking barefoot.
Walked back to the villa in this green land, to get ready for the day's land trip.
Walking in this green land with so many plants and trees made me wish to have the same back home.
Hoping that the air is as clean as it was in that place as well.
But before we left, we took a dip in the unoccupied pool, I, learning how to dive (haha) and him, teaching me how to dive and swim properly. It was my swimming lessons time. 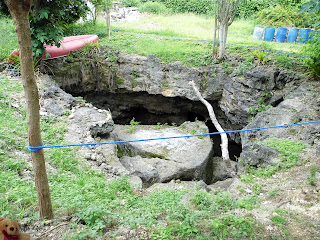 After an hour or so of swimming, we had decided to start our itinerary of the day.
Honestly, I didn't know where we were going, he had the itinerary, he knows where he wanted to go.

When walking back to the reception area, we found this cave looking thing. It looked really deep, but since there was a rope, we didn't go in. 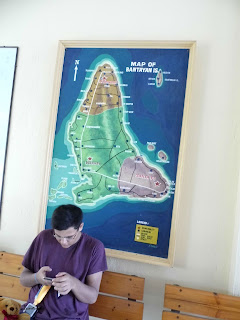 Went to the reception since we have to leave our room keys when we get out of the resort.
And there was a map showing the whole island of Bantayan Island.
And we were at the south east most part of the island and planning to go to the northernmost tip of the island.
Do you think we could make it?
Just us two?


Read the part two of our 1st day in the island adventure, very soon.

P.S: By the way, the Island, doesn't have a taxi, nor a jeepney. Just tricycle, motorcycles, and private vehicles.


This post first appeared on 7 TIPS EVERY BUDGET TRAVELER WOULD SURELY APPRECIATE, please read the originial post: here
People also like
Have you ever made love in front of other people?
Witnessing an Aggressive Event
30 Cheap & High ROI Home Renovations (And 5 Costly DIY Mistakes)
How to Lose Weight and Keep it off Permanently
Epoxy Flooring